In the latest installment of her column on the best moments of games, Hide&Seek development director Margaret Robertson takes a look at an obscure iPhone game, Sword & Poker, and springboards into a discussion of how games interact with time.
Margaret Robertson
Blogger
February 15, 2011

[Five minutes of... is a series of investigations by former Edge magazine editor-in-chief -- and current development director of social game developer Hide&Seek -- Margaret Robertson into what five minutes of play reveals about a particular video game, this time focusing on fascinatingly obscure iOS title Sword & Poker.]

From Elephant And Castle station to Loughborough Junction station, as a small but very select number of you may already know, is just a whisker under two miles. Or 3140 meters if you prefer to think that way.

Or three minutes 45 if you’re on the train, which you are, because otherwise it’s half an hour in the Walworth Road traffic jam or a joyless trudge past a lot of badly spelled chicken shops. Or, to put it another way, it’s almost exactly one bout of the excellent iPhone game Sword & Poker.

Which means that it isn’t a whisker under two miles. It isn’t three minutes 45. It’s three minutes 56 of Sword & Poker, followed by two seconds of heart-thump as you raise your head to see the doors closing on your stop, then three minutes of silent fuming till you get to the next one, two minutes of staring in fury at a departure board bare of any northbound trains, eight minutes of waiting for a bus, two minutes of giving up and walking before the bus overtakes you on the hill and a whole evening of being cross at your own carelessness.

I’d be surprised if anyone reading this hasn’t had that experience. We’ve been missing stops for 30 years or more, at least since Ball and Flagman arrived on Game & Watch and human punctuality took an irrevocable dip.

Why does it happen? Why do I miss my stop for a game more often than for a book or a daydream? Is it because Sword & Poker is just so darned engaging, so completely absorbing?

The iOS game was made by Gaia, the start-up founded by Kouji Okada, Shin Megami Tensei veteran and early force behind the Persona series. Gaia, I only recently discovered, went under last year, taking Sword & Poker and its sequel down with it. [EDITOR'S NOTE: Between submitting this column and publishing it, the two Sword & Poker games have returned to the Apple Store, happily.]

It’s best defined -- in one of my most favouritely dense game descriptions ever -- as a "poker patience RPG." 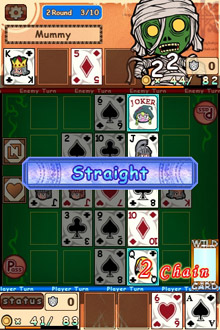 Played on a 5-by-5 grid, the game fills the centre square in with nine cards. You take it in turns, against an AI opponent, to play a pair of cards from a hand of four, such that they form a line containing a valid poker hand. Your opponent takes damage based on how good the hand is, and your cards replenish.

This, though, is an RPG, so these opponents are spaced out along dungeon maps and they wield -- as do you -- weapons which amplify damage, shields which protect, and special powers which radically impact your strategies.

These special powers can be collected and paired in carefully planned loadouts. One might multiply damage according to how many spades you have in your hand. Another might let you reorder the nine central cards according to suit, or number. More advanced weapons add status effects on certain hands -- poison or paralyse.

A simple combo system allows you to deploy a joker at critical moments. Some bosses have species traits that give them in-built advantages, like letting them always go first on a new round. The more opponents you beat, the more money you earn, the better kit you buy, the bigger opponents you can tackle.

Basically, you know the game you imagined when I said "poker patience RPG"? It’s that. Or it was that.

I’ve missed a lot of stops thanks to five minuteses with Sword & Poker that turned out to be a little more than five minutes. And it is no doubt because it’s decently balanced and enjoyably nerve-wracking, with enough strategy to keep my brain engaged and enough random treats to keep my dopamine levels topped up.

But it’s also because, the more I think about it, it’s a bloody miracle we’re able to keep any kind of track at all of the real passage of time while we play.

We still have a wonderfully vague understanding of what underpins our sense of time. It seems to be determined by several bits of the brain, and by internal, circadian rhythms as well as general external stimuli, which it turns out are called "zeitgeber", a word that would have done very nicely thank you as a Shin Megami Tensei subtitle.

It’s also thought to be highly connected to the degree of change that you’re observing: the more things stay the same, the more the clock crawls.

The legends of trapped pot-holers driven to premature cannibalism, tricked by just a few hours of sensory deprivation into thinking weeks have gone by, overstate the case, but the premise is sound. Time is, for a large part, change.

Is this, perhaps, the charge to lay at gaming’s door? Games are, after all, in a large part change engines. Do their patterns of change over-write the natural circadian checks and zeitgeberian balances?

If only it was that simple. Games, I’ve currently concluded, encompass at least seven kinds of time travel. And not infrequently several at once:

This is the phenomenon we’re most highly aware of: it happens every time we die. Nearly all games depend on the ability to rewind time one way or another -- to return, in the event of failure, to the state before a task was attempted. Sometimes these rewinds are limited in number via rationed save points, or in the amount of time that it’s possible to retract.

Increasingly, they’re given with generous frequency through automatic checkpoints and infinite lives. Sometimes they sit extrinsic to the game world, sometimes, as in Prince of Persia: Sands of Time, they’re manifested dynamically as you play and acknowledged by the plot. Either way, they accommodate the rhythm of risk and reward and trial and error that are central to gaming’s strength. 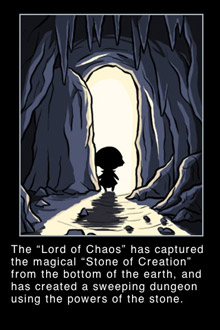 This one is so obvious we often don’t discuss it. In the overwhelming majority of games, time freezes when you’re not playing. You save, stop, come back and pick up where you left off.

In fact, one of Sword & Poker’s nicest little idiosyncrasies is that suspends perfectly neatly, apart from after the final attack of a bout.

If you quit just as a match finishes, when you come back, the game rewinds time just a few seconds, and you revisit that killing blow.

Whether it’s a coding quirk or a deliberate bit of theatrics, it nicely re-motivates you for what’s ahead -- either pressing on or turning the clock back: time travel inciting more time travel.

Time Moves at a Different Speed

Of course, whether or not time does suspend, there’s no necessary correlation between the passage of game time and the actual decay of actual cesium, second by actual second.

Most games with representational rather than abstract worlds monkey with the speed of time one way or another. Day-night cycles are frequently reduced down to the ten minute range in RPGs and action adventures of various perspectives.

And other game types aren’t immune: don’t get me started on the mockery that "‘real-time strategy" makes of its genre name, as months of marching and building and researching are compressed into seconds.

Of course, as an added trick, many RTSes also include sliders to let you tweak the passage of time to your tastes -- so it’s not just it moves at a different speed, but at different speeds.

Time Is Out of Sync

Not, of course, that you’re out of the temporal woods if the game you’re playing neither suspends, compresses or rewinds. World of Warcraft is persistent, ongoing, and pegged resolutely to the earth’s rotational speed.

So, surely, here we’re time travel free? Not if you’re in London, loyally playing on the US servers so you can maintain a transatlantic alliance. Night is day and day is night, and things are further conversationally confused by the fact that the people you’re talking to are all in different time zones.

Whatever combination of the above you’re up against, it’s only ever half the story. Because knowing whether a day/night cycle is 12 minutes or 12 hours is, in isolation, meaningless. What you need to know is how much you can accomplish in that time. Our measurements of time are a standardized abstraction, meaningless in themselves.

I can more meaningfully understand that an hour is the time it takes an average man to walk three miles. Or a week is the time it takes a satsuma to rot, or a month for those radish seeds to sprout. These are deeply unstandardized, but deeply relatable, ways of communicating the passage of time.

In games, whether a day is a minute or hour, there’s the further question of whether it takes three or 30 of them for your radishes to propagate, whether your character can walk 30 miles or 300 before night falls -- leaving for another column the question of what a "mile" might mean in game terms.

The Game Is Set In a Different Time

Obvious, but important -- the setting of a game may exist at a different level of game logic than the considerations outlined above, but it still signifies. I don’t tend to think about Total War or Brothers in Arms as time travel games, but they are in their way. It’s a complicated bit of time travel, since it happens before the game loads, since, from the game’s perspective, there is no time travel: the story is unfolding in its own present. But that story is in my past, at least until I turn on the game. 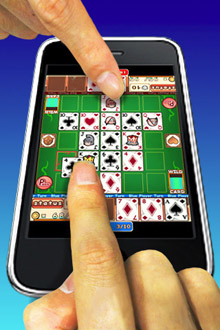 And that gives us our last kind of in-game time travel, which is the kind you get in actual time travel games. Whether it’s Chrono Trigger or Dark Cloud 2, games are some of the best places to experiment with stories that directly address the complicated consequence loops of time travel.

It’s hard to find things that exhibit all seven behaviors, because there’s a straight conflict between games in which time suspends and those in which it persists.

Sands of Time, perhaps unsurprisingly, scores pretty high: it’s a game with (if memory serves) an artificially slow day-to-night cycle which unfolds unevenly as you suspend and rewind time each time you save and die, in which the time-cost of your actions isn’t what you would expect in real life.

And all this in a story which is set not just in a heavily fantasized but recognizable historical setting, but also in its own past, since the whole game is told as a flashback. I currently can’t top that, but would love to hear if you can.

For my part, I’ve decided to forgive myself -- and Sword & Poker -- the missed stop. It doesn’t seem like such an egregious crime now I know what I was up against, and if truth be told, I wasn’t unhappy to get another couple of rounds played while I waited for the bus that never came.

The biggest frustration, in the end, is that even with seven kinds of time travel in my pocket, I still can’t make the journey I feel I ought to: back to early 2010, in time to tell more people more good things about Gaia’s little gem, and give the studio a better chance of changing the ending of its own unhappy timeline.