Three social game developers with backgrounds in traditional development take on common criticisms of the space, sharing examples of how their corner of the internet is rapidly growing in complexity and nuance.
Game Developer
Staff
October 12, 2010

Developers of traditional games often dismiss titles on Facebook as mere "Skinner boxes" -- devices that use scheduled reinforcement to reward repetitive actions. They are activities, not games, say critics, who call them too simplistic, too repetitive, too "grindy." And they are driven by the business model -- not by the fun.

But it may be time for naysayers to take another peek. Facebook games have grown increasingly sophisticated and could become the equivalent of "real games," leaving critical developers in the dust.

Take Brenda Brathwaite, who has been creative director at Lolapps -- a developer of 11 Facebook games -- for five months now, but who has been in game development since 1981, during which time she was credited on 22 game titles.

"The main difference is that the typical hardcore game is designed for synchronous play -- for instance, you could easily take the next week off and do nothing but play Civ V," she says.

"But so-called Facebook -- or social -- titles are designed for asynchronous, scheduled, or appointment gaming that is conducive to a little play here, a little there. They are for people with, say, five minutes of game time, five times a day."

However, the rule sets are frequently not all that different, she says.

"Likewise, I find it endlessly amusing to beat on creatures in World of Warcraft. Why? Who knows? In all these examples, it's just something relaxing and enjoyable for me to do. I don't look at the 20 minutes I've blown and say, 'Damn! I could have been reading Ulysses! I don't necessarily think games must have some higher social purpose. As long as they are fun, I'm okay with that... and so are many gamers out there for whom casual clicking is exactly what they want." 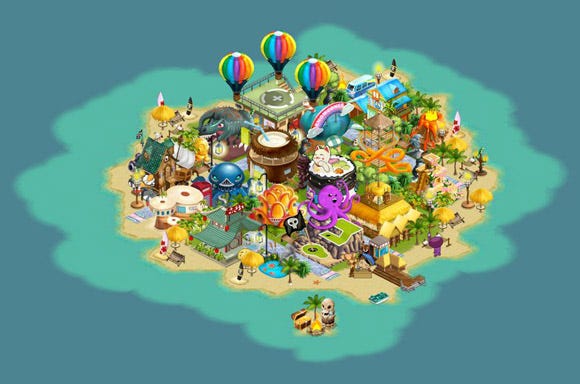 But others crave something beyond mindless clicking, which is the reason some Facebook developers are creating alternate choices.

"That's why games like FarmVille and YoVille are increasingly adding new mechanics to keep the user base interested," Brathwaite explains. "The designs are becoming more complex and giving players more and more to do -- like recruitment mechanics, for example. Not only do I get to help my friend and my friend gets to help me, but we get to work together toward some greater goal.

"And these ideas that are proliferating in some of the older games are spreading out to new games. That's what happened when we released Critter Island. I know we don't have the world's sexiest graphics -- we haven't entered the 3D arms race yet because there's only so much you can push across a pipe like Facebook. But we have certainly entered the 2D arms race."

Brathwaite calls the additional complexity "retention features" -- regardless whether it is additional social interaction, "more opportunities for the players to make decisions or do things or feel they've been super-rewarded.

"The bottom line is that you want people to keep coming back to play your game, and so it needs to keep evolving," she says. "If the player feels they've completed all the game has to offer, that there's nothing else to do, they'll get bored and move on. You need to keep them intrigued."

Brian Reynolds is another "real game" developer who made the leap to Facebook games when he joined Zynga last year as its chief game designer, creating the hit title FrontierVille. Previously, he played a major part in creating such multi-million-selling strategy games as Civilization II, Rise Of Nations, and Sid Meier's Alpha Centauri.

He dismisses criticism of social games, noting that it's a young industry and not all traditional game developers are keeping up with developments.

"As the platform becomes more familiar to them, they'll see that social games are becoming more interesting, more sophisticated," he says.

Reynolds believes that much of the criticism comes from developers who make "really big, expensive, and complicated games that take them years to create... and who feel that these tiny social games that run in browsers somehow don't count as games.

"The funny thing is that, I, as a game designer, think there's a lot more actual design going on in the social space than in the triple-A space."

"That's one reason I got into this... because in the triple-A space you spend three to four years getting the technology together, getting the art and production values right, composing the music and the sound effects, and so on.

"The amount of actual game play you design is only a small piece of the $30-million budget. I'd spend months and months where there wouldn't be any actual game design going on."

In Facebook games, however, Reynolds says the designer is bandwidth-constrained. "You need to come up with a game that loads in two to three seconds and will entertain someone for just a few minutes at a time. And that, I must say, is quite the challenge! What's important is not how many impressive graphics you can deliver or the quality of your technology -- it's the design of the gameplay and the quality of the interactivity. And that's what I'm really proud of."

Reynolds believes that Facebook games have evolved considerably since the word games and quizzes of three years ago. Last year's FarmVille, Café World, and FishVille -- all from Zynga -- were still fairly simple "but were charming and really accessible to a lot of people," he says.

"Now that we've established that there's a huge mass market audience for Facebook games, we are starting to make titles that aren't necessarily more complicated, but are more entertaining and let friends interact with each other in more sophisticated ways," Reynolds explains. "Like in any new platform, it takes some time to figure out the best ways to entertain people. But we're getting there."

Indeed, Zynga's most sophisticated game, says Reynolds, may be his own FrontierVille, released in June. It's similar to FarmVille in many ways except that, instead of a farmer, the gamer plays the role of a pioneer in the Old West.

"It's head and shoulders above anything seen before in the genre," he notes, "since we invested in trying to move the needle in a whole lot of different areas of gameplay innovation, of social interaction, and so on." Specifically, he cites the pioneer story element, the multiple activities from which the gamer can choose, and the social element that allows gamers to assist their friends in those activities.

"If you were to play FrontierVille for 15 minutes and then FarmVille for 15 minutes, you'd immediately see the difference in the level of complexity," he notes. "Not only will our fans enjoy our newest title, but I have a feeling that skeptics who say we're not creating 'real games' will gradually fade away."

Steve Meretzky agrees. The VP of game design at Playdom is best known for some of the early Infocom games and, more recently, the Zoo Tycoon franchise. But his current focus at Playdom is on Facebook games, and he sees them growing in their sophistication.

"Those two [Zynga games] are the perfect example of how Facebook games are progressing," he says. "At first blush, FrontierVille looks a lot like FarmVille, but after you play a while, you see that the newer game does have quite a bit more depth and complexity and some moderately interesting new developments in terms of its animal-nurturing component, its town-building component, and its tile-searching component.

"The two games share some of the same mechanics... but I do feel like FrontierVille moves the arc forward. Some might say it doesn't move it fast enough, but that's very subjective, isn't it?"

Meretzky's biggest criticism of social games is that they continue to be primarily single-player experiences with the social interactions more peripheral than central to the gameplay.

"We've certainly gotten better at raising the production values of the games," he says, "but where we, as an industry, fall short is not moving the ball forward in terms of really making these games more social and taking advantage of the viral channels that Facebook allows."

In Playdom's most recent title, City Of Wonder, he describes aiming for a 50-50 mix of Civilization and SimCity gameplay while utilizing "an interesting way to move the socialness forward -- and that is having a building in your city that represents your friends. Every time they visit you, that building levels up and takes on a better appearance. It's a minor improvement in terms of making the game more social but, nevertheless, it's a nice little innovation."

Meretzky believes criticism about the lack of speed with which Facebook games are becoming more sophisticated is inappropriate. Especially since the whole field of social gaming is only about three years old.

"Heck, three years from the start of electronic gaming, we were still in the Pong era," he recalls. "Sure, in 2007 we started with a much higher level of technical possibilities than existed 30 or 40 years ago. But we've come a long way in three years. Facebook games have become more sophisticated, the gameplay deeper, the production bar is higher. And I certainly predict those trends will continue."

"I don't want to hear that Facebook games are Skinner boxes," he adds. "You know, when you come down to it, basically all games are Skinner boxes -- meaningless activities where you're not getting anything out of it other than enjoyment. But in traditional or more complex videogames, the Skinner box core is more buried under a lot of sizzle. In Facebook games, just because they are so stripped down to their simplest, barest elements, the Skinner Box skeleton is just more visible."

Meretzky suspects that criticism will wane as more and more traditional game developers join him -- and Brathwaite and Reynolds -- on the social side.