In this reprint from Game-Wisdom, I examine the concept of false choices or when too much choice is not a good thing.
Josh Bycer
Blogger
June 04, 2014

Over the weekend, I was bored and decided to go back into my backlog to finish a game, and the one I choose was Dante's Inferno for the PS3. Dante's Inferno was poorly rated for a number of reasons, but there is one major point that I want to talk about, as it made a classic mistake of not balancing game design with player choice.

Since the days of early CRPG titles, designers have allowed the player to make choices that can affect the gameplay in a number of ways: From deciding what equipment to buy, areas to explore or even their party composition.

However while choices are great and can lead to the player personalizing their experience, if not properly balanced they can do more harm than good.

A false choice can be defined as the following:

A choice the player can make that is across-the-board weaker than all others due to the game's design.

To put it another way: It is like saying that there are no wrong choices, but only two will allow you to finish a game.

One of the simplest examples goes back to old-school CRPG party composition. In these titles, the available player classes fit the Dungeons and Dragons paradigm of classes that were locked into their supposed roles. A warrior would never learn magic and a wizard won't wear plate mail for example.

The problem was that you must have a cleric or some healing class in your party to have any chance of surviving. The game obviously doesn't tell you this and lets you assume that you have complete freedom in party personalization.

While CRPG design has loosen up over the decades, other genres have grown and began to give the player more options in how they play. Unfortunately the more variables you throw into the equation, the more trouble can come back to bite you.

The more choices that you give the player, the more carefully the game has to be balanced to accommodate. If the designer fails then they can make the experience far worse or even unwinnable.

In Dante's Inferno, the player had two skill trees they could improve over the game: Holy and Unholy. You earn points for the respective trees by finishing off enemies in a specific manner. The former was about using ranged holy magic attacks, while the latter was about close ranged attacks.

As you went up in level in either tree, you would unlock more moves for the respective attacks and their general attack strength would improve.  Now given the nature of the trees, you realistically had to make a choice early on over which one to go up to reach the top level skills.

While the holy tree sounds like a safer option, if you go completely up the tree, you would find that the designers did not balance the game around it. Later enemies have a magic shield they would put up for all nearby enemies that negate all holy attacks. 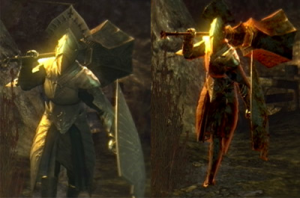 The bosses in Demon's Souls were designed to be handled in a number of ways, with some easier than others.

Even the final boss would punish the player for using holy attacks: by countering them and throwing them back at the player at greater strength.

Those two cases force the player to use melee attacks and render the holy tree attacks completely useless.

Interestingly, finding condemned souls and absolving or finishing them the holy way would yield more experience than punishing them. This little trick would further convince the player that going up the holy tree was better when it would come back to bite them for the final fight.

Now, if you were playing the game and reached the final boss and realized that all the choices you made were wrong, would you feel like replaying the entire game?

Another element of false choices is forcing the player to make permanent choices without future insight. In Deus Ex: Human Revolution (before the director's cut version,) everyone had talked ad-nauseum about the poor boss designs. When you give the player stealth and movement options that were locked to the player afterwards, to force the player into gun-fights was not good design.

Being able to respec -- or redistribute skill points is a quick fix for getting around false choices. If the player makes a choice that doesn't work, they won't have to restart the entire game to make new ones.

Now, there is an important distinction we have to talk about: the difference between sub-optimal choices and false choices.

When a designer gives the player a variety of options, weapons and tactics it's understandable that not every option is the absolute best at every situation, as long as the options are not completely shut out due to the design of the game.

In Demon's Souls, one of the final bosses was the super-strong knight: Garl Vinland. He wore magic proof armor; wielded a massive weapon and fought in a narrow corridor. For this battle, direct damage magic spells were useless and normal fighters would have had a hard time.

However, the bosses of Human Revolution could only be beaten by using force.

Ranged or spellcaster characters however could ignore the fight and go after the person he was protecting easily and win the fight without fighting him.

In this case, several choices were harder for the player to use than others. However, none of the choices were made outright useless and a good player could adapt.

Now if there was a required boss that could only be defeated with fire magic and ignored everything else, that would be different.

Games with RPG systems are not the only ones that can have false choices. In Bioshock Infinite, there were several weapons that due to their handling and general appearances in the game were poor choices to keep and upgrade. This is the danger you run into in titles with multiple weapon types when the situations themselves were balanced around one or two specific weapons.

Obviously the simplest solution to avoiding false choices is just not giving the player game-changing options. But unless you are creating a completely linear experience, this could make the game boring.

Sometimes less is more: it's better to have three integrated choices over a grab bag of choices. As chances are, the ones that weren't balanced would be the ones that players gravitate towards. And all it takes is one poor experience to ruin the whole game for them.