Dynamite Headdy is a platformer developed by Treasure in 1994 for the Sega Mega Drive. Representing a puppet show, the game uses the 16-bit machine to create a fourth wall breaking experience in which the game events take place in front a live audience.
James Soares
Blogger
June 29, 2015 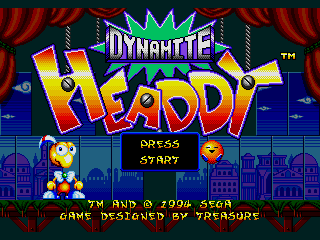 The unique selling point of the game is the separation of the playable character into two parts- head and body. Headdy’s head is detached from his body and levitates slightly above where his neck should be. The head can be fired short distances in eight by holding the d-pad and pressing B. The 8-way controls are similar to a shooting game such as Contra or Metal Slug. The head travels a short distance before returning to the body. Headdy can combine these with jumping and ducking. A unique selling point is the fact that only Headdy’s body takes damage yet his head does not. The player must use their head for offense while making sure the body avoids harm.

Unlike the similarly designed Rayman, this game justifies Headdy’s detached head by making him a puppet. The whole game world is set up as a theatre show and its aesthetics are designed around this idea so that the player never forgets that the game is a piece of fiction within fiction. The plot of the game, while vague, is still relatively straight forward with an antagonist (Dark Demon) for the melodramatically expressive hero to defeat as one may expect from a pantomime.

“The most compelling amusement park attractions build upon stories or genre traditions already well known to visitors, allowing them to enter physically into spaces they have visited many times before in their fantasies. Broadly shared genre tradition- designer assumes some assumptions of the player- setting and world” - (Jenkins, 2004)

Presenting a particular immersive aesthetic theme is more difficult on the 16-bit Mega Drive technology than it would be for a modern HD system. While the Mega Drive obviously isn’t incapable of showing a clear and understandable world, it is likely that a player will take most visual representations of objects at face value. Without being explicitly told that a 16-bit cloud is actually a 16-bit painting of a cloud, something else has to make the construction obvious.

“Relatively higher-quality graphical resolution and design/reproduction of sound can increase the extent to which narrative, generic or other contextual frameworks are likely to be in play, giving a stronger sense of the location of gameplay within a particular, realized milieu.” (King & Krzywinska, 2006)

The game resolves this by constantly presenting ‘giveaways’. The set backgrounds are almost always damaged in some way, including torn matte paintings and exposed scaffolding. This damage is required to clearly identify the backgrounds as artificial. The whole world is a stage- for example clouds are held up by frayed ropes. Levels are also referred to in-game as ‘scenes’. 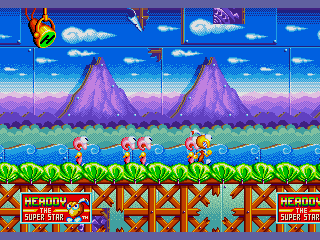 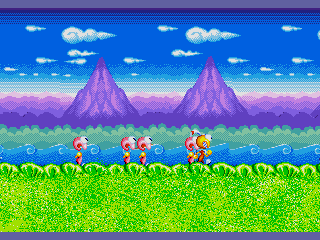 A manipulation of the above screenshot to remove all set imperfections

The original Japanese version told the story through text dialogue which has been almost entirely removed in the foreign release. The game opens with a dialogue-free overview of the plot. While the character names appear at the bottom, a series of events detail the setup: Robots attack a once peaceful town of toys. Headdy attempts to fight them off but is swiftly captured. Headdy is deemed unfit to enter ‘D.D Imperial World’ and is dumped for incineration. Headdy breaks out and the game begins. Any specifics about the plot in the Western version are hard to determine as it is difficult for the player to differentiate between the events of scripted puppet show and what happens outside of it. The game’s focus on cartoony melodrama still makes the tone clear. (Schell, 2008) states that when balancing the tone of a game, it is acceptable to “give details the imagination can use”. (Salen & Zimmerman, 2004) also explain that “When you are creating a games with less typical narrative experiences, your design task becomes more challenging.” They go on to say that players not initially familiar with a game’s fictive world would rapidly require traits to establish the world. By carrying the visual cues of set stage design the players can quickly grasp that this is not a game world to be taken at face value.  “Narrative descriptors in games include everything from the written introduction to the opening cinematic, from the design of light and sound to the style of the game interface.”

The game features a dijectic HUD in the form of Headdy’s spotlight- the colour of which represents his 16 hit points of energy.This is also reflected in his bowtie. Another spotlight appears on the opposite side for bosses. This is an additional part in forming the consistent game world which (Bjork & Holopainen, 2003) refer to as game patterns. “…game elements are normally also related to one another, thus creating game element configurations.” The game relies on the theatrical references working together to succeed as a whole. “The state of the game is the totality of the game element configuration at any given time.”

The first level has Headdy run away from a robot. Headdy cannot actually be caught by the robot and it isn’t neccesary to destroy the robot to continue. This entirely consequence-free enviroment allows the player to learn the controls without stopping the flow of the action.

“Some games create a space for rehearsal, as well, so that we can make sure we understand our character’s potential moves before we come up against the challenges of navigating narrational space.” (Jenkins, 2004)

Appling this to Csikszentmihalyi’s Flow Channel (1997) we can strike a balance between the thrill of running from a robot while avoiding the anxiety of failure. The player can freely learn the controls at this point through experimentation. The Mega Drive controller has only four buttons and a d-pad. This avoids what (Swink, 2009) calls ‘state overwhelming’. Game controls are often tradition bound (Sniderman, 1999) and through the standards of Sega games, B is commonly attack and C is jump (Golden Axe, Splatterhouse 2).

The following threats (a bomb-dropping plane and the first encounter with reoccurring boss Trouble Bruin) are low level challenges that do not require any of the gameplay lessons that appear in the following tutorial level. (Swink, 2009) refers to the cycle of game feel and challenge- new challenges are only introduced once the player has an established understanding of their character’s abilities. 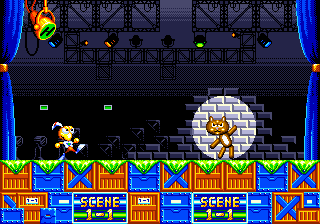 Trouble Bruin in the spotlight

It is Trouble Bruin pushing the backdrop down on Headdy in the very first stage that establishes that the ‘show’ within this game has no fourth wall. The ‘fourth wall is a term taken directly from theatre and references to the ‘wall’ separating the stage and the audience (Bell, 2008).

After Bruin is defeated the player moves onto Scene 2-1 set in a town of toys. The player is given three optional tutorials based on Dynamite Headdy’s three gameplay pillars each of which is represented by a friendly NPC.

Headcase is a small orange smiley face that resides in a box. The box cycles icons representing different power up heads. Hitting Headcase will replace Headdy’s head with the one currently displayed. Each head offers a unique gameplay effect such as Warhead firing out projectiles in eight directions. Most heads can be removed with the A-button or are lost after a set amount of time. Using these heads help with particular bosses and some are required to navigate the environment, most notably Pinhead and Spike Head. To demonstrate the usefulness of Headcase the player is given one to combat a series of toy soldiers.

The second friend/gameplay style is Hangman. Headdy can grab these orange similes with his head and he will hold on as long as the B button is held. Once released Headdy’s body will be pulled up like a rubber band. This is used for fast vertical movement and can be used multiple times in the air. This is tested by a vertical auto-scrolling level that relies on more elaborate moves as it progresses.

The final friend is the angel Beau who points out the weakpoints on bosses. There are many bosses and mini-bosses in Dynamite Headdy which is a trope of developer Treasure (Alien Soldier, Sin & Punishment). This trial requires the player to hit targets establishing the 8-way shooting mechanic. The game features a distinct audio feedback system. An enemy that blocks an attack in some way gives off a metallic ‘ping’ sound whereas actual damage gives a satisfying ‘squish’ noise.

There is very little asset recycling in Dynamite Headdy. Most levels feature unique tilesets and enemies that are only seen on single short stages. Dynamite Headdy’s levels are usually very short and many scenes have the camera static for a boss fight. (Wolf, 2002) claims that a small game space such as this can make combat more intense. The game also features artificial scrolling; backgrounds run in a loop as though the camera is actually static. The player is watching the show from the audience, a form of emergent perspective rarely possible within a strictly 2D system with no Z axis camera movement. As a stage show is similarly viewed from a static perspective this technical limitation of the game feeds directly into its theme. 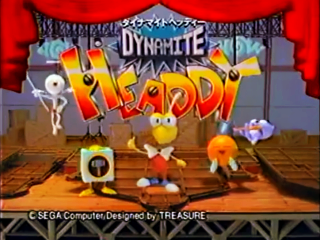 Still from a Japanese television advert

Dynamite Headdy features a diverse soundtrack which even includes a performance of the Nutcracker March during a boss battle complete with performing orchestra members. The player can hear the audience cheer whenever Headdy completes a level which is an incorporation of the belief of (Schell, 2008) that the game’s direct praise of a player is a form of reward equal with the promise of future powers and challenges.

The limitations of the 16-bit hardware have helped Treasure create a platformer in which every aspect of it contributes strange vivid world and it justifies the unique selling point of the gameplay. “The artists are simultaneously empowered by and restrained by technology, and the engineers are similarly empowered and restrained by art.” (Schell, 2008) The plot of Dynamite Headdy is somewhat weak because of the vagueness of the events that occur but it compensates by presenting the story in a unique setting. “even narratives that do not fit this paradigm draw their meaning from the way they play ironically against our deeply engrained expectations that all narratives are going to be like that.” (Hillis, 1990)