The history-driven design of Ambition: A Minuet in Power

Steeped in historical fiction, Ambition: A Minuet in Power weaves the spirit of its source material throughout this visual novel about the French court, fashion, society, and subterfuge.
Joel Couture
Contributor
November 23, 2021

Ambition: A Minuet in Power (Ambition) draws players into the turbulent times of 18th century Paris, France. Cast out and all alone, the player must use lies, seduction, and gathered intel to claw their way into the aristocracy, eroding it from within with your careful manipulations (and crafty outfit choices, as fashion is a vital piece of the game). Or die to the guillotine if you make too many bad moves. No pressure.

Game Developer sat down with Luther Patenge of Joy Manufacturing Co, developers of Ambition, to learn about the research that went into capturing the time period, how they worked to make player decisions feel loaded with potential dangers, and the thoughts that went into recreating the vital fashions that would become an integral part of the game.

Game Developer: Ambition is a game of carefully navigating the French court through lies and information. What thoughts went into creating a game around this kind of strategic maneuvering?

Patenge: A major pillar of Ambition’s design was a commitment to the idea of ‘soft power’. Yvette (our main character) doesn’t have the birthright or the position to just order people around, but she’s charismatic and clever enough to change people’s minds.

This kind of narrative-heavy maneuvering naturally lent itself to the visual novel format, which also felt surmountable for our small team. From there, we started pulling in the idea of randomly generated parties, and getting ‘loot items’ in the form of gossip or changes to favor with different groups.

This is also why, in the game, it’s possible for the revolution to fail, and for the crown to stay in power. It felt important that the player should feel as uncertain about the outcome as Yvette would have felt in her own time period. Yvette can’t overthrow the king herself, but she could make sure the revolutionaries like her, and make sure the Crown always looks bad.

Flirting and seduction also form a critical part of your strategic abilities. How did you work that into a gameplay mechanic as well?

Much research went into the ‘stat raiser’ sub-genre of visual novels and seeing how other people handled it in the past. Tracking favor with someone as a number felt like a logical place to start, and gating certain story points based on the player’s favor with that character meant the player has something easy to understand and actionable to work towards.

While writing each love interest in the game, I set out with a specific set of personality traits for each character, and the kind of traits they were looking for in a potential partner. The domineering widow, Honorade Gazel, is looking for someone indulgent and dramatic, but the lovesick priest, Father Sidotti, is looking for an adventurous bad girl. I think planning these things out ahead of time helped make each love interest and their romances feel distinct. The last thing you want is for the player to feel like what they say to each character doesn’t matter. There has to be a clear case of cause and effect in games writing. 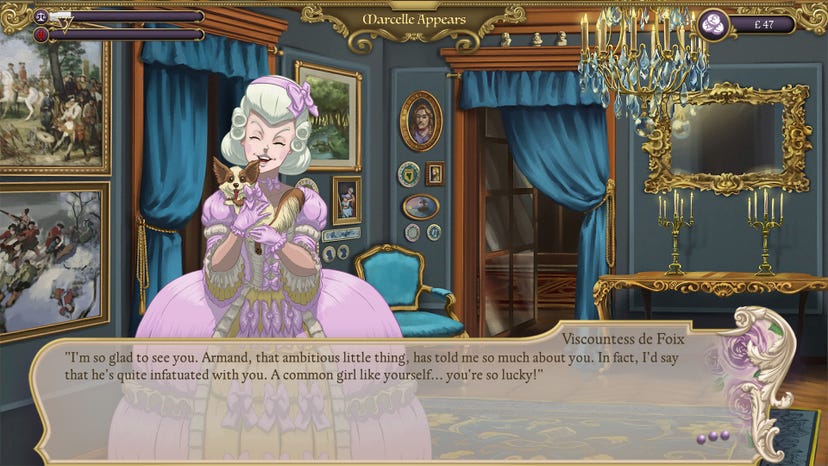 Ambition comes with a great sense of danger and tension with every decision the player makes. What thoughts went into infusing that feeling into the narrative and into the gameplay decisions players make?

Simplifying our main stats to ‘credibility’ and ‘peril’ was a really helpful decision for us. While I’m sure we could have made things more complex, by reducing it to two important numbers, we freed up the player to focus on the story and on grasping both the subtleties and the seriousness of the situation around them.

It also helps that the subject matter in Ambition is more relatable than most games. None of us have found a magic sword needed to fight an army of demons, but all of us have met a spiteful person who could ruin our life over the pettiest slight imaginable. These risks hit closer to home, so they tend to have a greater emotional resonance.

As funny as it sounds, I found that the best place to start was the classic 1970s anime Rose of Versailles. While fictionalized and extremely melodramatic, it serves as a fantastic primer on the events of the period.

From that baseline, I dove directly into Citizens by Simon Schama, which is one of the major scholarly works on the period. It’s also a 700 page tome that will teach you more about the 18th century system of salt taxation than anyone should ever know. However, that flood of data was really helpful for understanding the core elements: Who were the major players? What did everyone want? What could they do, to get what they wanted?

That core makes it much easier to break down the events of a setting. History isn’t a story, per se, but a series of events where people made decisions based on their desires, resources, and limited information. Sometimes these decisions were extremely complex, but sometimes it really was as simple as ‘I’m starving to death. Let’s join a mob to rob a wealthy man who eats well so I don’t die.’

Beyond that, it was a lot of research into specific subjects. Stand out books include The Black Count by Tom Reiss and Servants and Masters in 18th Century France by Sarah C. Maza. No one source is going to give you everything you need.

Fashion is a vital part of the game as well. What work did you do to really get to know the fashion of the time? To incorporate it into the game?

Being true to the aesthetic of 18th Century Paris was a paramount concern for our team and we did everything from reading books, to watching period pieces, to visiting art galleries, to talking with historical reenactors, to get all the data we could find.

When I say ‘aesthetic’ I don’t just mean fashion, as a culture’s visual language doesn’t end at their clothes. We studied architecture for visual cues to put in our UI, and even our map screen is styled after how city maps were drawn in that time period. Most city maps weren’t drawn ‘top down’, as aerial photography hadn’t been invented yet. Maps tended to look down at the city at an angle, as if from the top of an imaginary hill. It was just the way people thought about the world.

Even if a player isn’t familiar with the culture, putting all of these little things together creates a holistic presentation that just feels ‘right’ when someone plays it. Anything that felt too ‘modern’ threatened to undermine that feeling of a specific place and time. 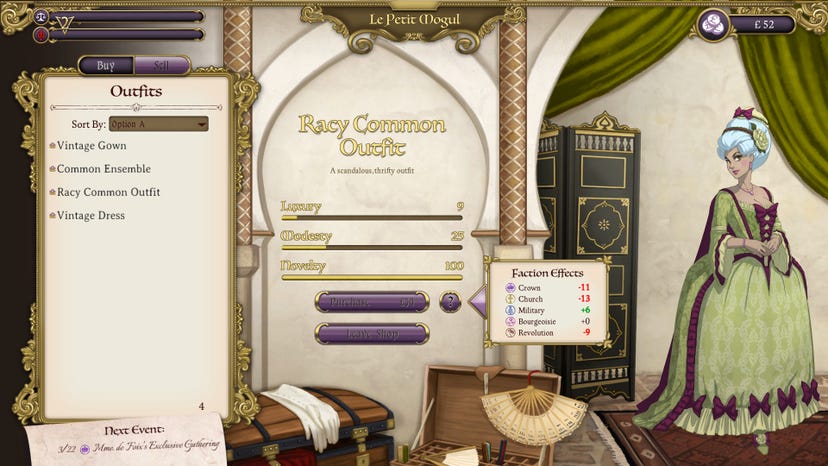 What drew you to make fashion a key part of the gameplay? How did you turn fashion sense and choice into a strategic tool?

I’m a firm believer that the ‘dress up’ element of every RPG is one of the best parts. I’m that idiot who’ll wear sub-par gear because it looks cooler than the optimal set. With that in mind, the idea of fashion sense as a strategic tool was central, even in the earliest prototypes of the game.

In Ambition, each faction hosts parties, and they have particular tastes in regards to your outfits. Dressing appropriately for the situation increases the player’s credibility, which makes it easier to sway people’s emotions. In real life, we’ve all made the mistake of showing up dressed ‘wrong’ for a social event and felt awkward for the rest of the night, so it felt like a solid thing to make a mechanic out of. By having Yvette constantly changing her clothes to match the occasion, it also reinforced the idea that she is a chameleon by nature. She gets her way by fluidly adapting to the world around her.

Did you take some creative liberties or create some of your own spins on the fashion of the time? What thoughts go into building on classic historical designs from this period in France?

Most of our outfit art is heavily inspired by actual paintings and fashion plates from the period. Since fashion magazines came out with new issues every ten days in that period (yes, really!), we had plenty of raw material to work with.

On the other hand, one of the most difficult aspects of this is that a lot of these reference materials are divorced from cultural context. We know what someone wore, and have a vague idea of the social class the person wearing it was from, but there’s a lot of meaning that’s simply been lost to the sands of time. Even in the modern day, these cues are everywhere. A person wearing a baggy hoodie with boots sends vastly different cultural signals than a person wearing a flannel button up with skinny jeans, even though both of those outfits are considered ‘casual’.

When it came to these cues for Ambition, we eventually had to use all the research we could muster (the Aristocracy liked rich and bright colors to show off wealth, Revolutionaries considered darker and more ‘sober’ colors the sign of a rational mind), but some of it simply came down to guess work. Hopefully, we succeeded!

Sound design was also an important part of the game and how it captured the feel of its setting and time period. Can you tell us about the research and work you did to get the music feeling just right for your work?

As a game designer and a writer, I know very little about music. When you don’t know what you’re doing, and you don’t have time to learn, the solution is to find someone who does!

Enter John Robert Matz, our composer on Ambition: A Minuet in Power. When he and I met, I mentioned that I was looking for a composer that could make original music in the style of this particular period and place. He thought the idea was very exciting and was quick to point out that different factions in the game would have different musical tastes. While the crown would still be mired in late baroque compositions, the bourgeoisie would be surging ahead into fashionable things like string quartets.

However, the piece I’m still happiest with is Fatima’s theme. Fatima Shenna is a dressmaker in the game, and she’s of Moroccan descent, despite actually being born in Paris. Given that she’s functionally a child of two cultures, it felt important to represent that in the music that plays in her shop. With that in mind, her theme is actually French styled music, but covered on North African instruments. She’s clearly French, but naturally brings a viewpoint from somewhere else.

As I mentioned before, obsessing over these little details helped us bring everything together into a whole greater than the sum of its parts.