Indie studio Mografi tells us how the team designed the narrative system of Jenny LeClue - Detectivu, and how choices were implemented to define character personality, as opposed to shaping the plot.
Phill Cameron
Blogger
October 07, 2019
When the small studio Mografi set out to make the choose your own adventure game, Jenny LeClue – Detectivu, they had an interesting concept in mind. Rather than letting players directly impact the types of events that unfold, they wanted to take a more personality-driven approach to narrative.
Players would be able to decide the way they respond to different conversations and their style of detective. This would then change how relationships in the game develop and what kind of person the lead character would become. Would they be more empathetic and understanding or push harder for the truth? Would they bend the rules where possible to protect their friends and family or stick firmly to what’s right?
On one level, Jenny LeClue is about the young detective of the same name, who must collect evidence and investigate leads in order to free her mother, jailed for murder. But, on another, it’s about the author of Jenny’s world, Arthur K. Finklestein, who must put his young lead through all sorts of dramatic events at the behest of his publisher. Players switch between these two perspectives throughout, making decisions that will impact how Jenny grows and influences others.
To handle these decisions, the studio used the Unity Store asset, Dialogue System for Unity, as the backend for the conversations, and then used scriptable objects to record the weighting of certain player choices. This would allow them to collect these decisions and score them, to generate one of eight potential personality profiles for the player.

For example, in one of the opening scenes, Jenny’s mother asks her to find some student papers on decapitation. Jenny can refuse to help her mother three times, but she will inevitably have to look for the papers. While this decision may not allow Jenny to leave without helping, it helps to define the dynamic of the mother-daughter relationship and will lead to a change in Jenny’s personality as the game updates.
“I think of [the choices] like Kentucky Route Zero, where they talk about it like you’re choosing the inflection rather than having direct control of completely changing the story,” says Joe Russ, the co-creator of Jenny LeClue. “You can choose whether Jenny is aggressive or more good cop. We think of [Jenny LeClue] as a really character-driven game so we wanted the choices to feel like they come out of character-driven choices as well.”
The benefit of this approach is that the developers don’t have to spread themselves too thin facilitating an obscene number of permutations or individual branches. In the above case, for instance, the plot will eventually fold back in on itself, meaning the developers don’t have to continue writing an entirely separate scenario, but simply remember the emotional context of the scene and how that defines the relationship.

Communicating that approach to the player

Something that the developers had to consider carefully with this approach was how to communicate these decisions and their impact to the player. This is where the journal comes in. Originally, the team had discussed taking a more direct method, similar to Telltale Games, but it didn’t feel right for the type of story that was being told.
Russ explains, “We definitely considered that kind of blunt, just stating ‘Hey, this character will remember that’, ‘Hey, this will make a big change on the game,’ but it just feels so blunt and we wanted it to be more subtle. I know Oxenfree does this thing where they try to split the difference and do weird emoji faces of the character reacting to you, but even that’s not clear what that means. So we opted for, ‘Well, you can see your player choices, and you can see in the journal how that affects your personality.’” 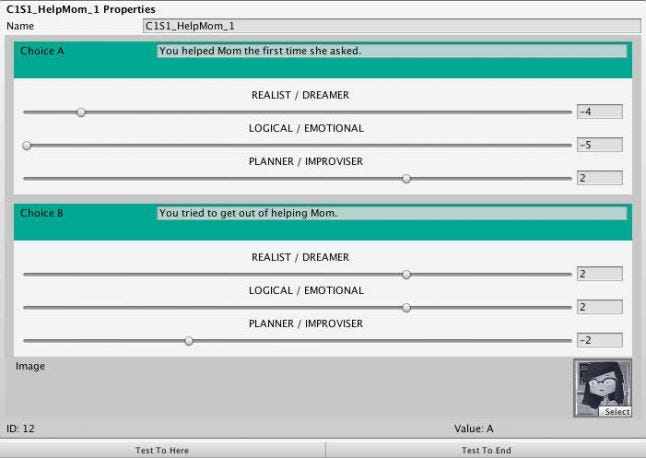 The choice editor
If the player checks the journal at any point during the game, they will see a visual representation of the type of personality they’ve been assigned above a set of scales. These scales are divided into three categories: spirit, temperament, and strategy. They decide whether a player is more of a dreamer than a realist, more logical than emotional, or more of an improvisor than a planner.
“Each choice you make in the game is scored on a variety of personality factors and directly changes your overall score,” states Ben Tillett, another of Jenny LeClue’s co-creators. “The way the personality system works is a bit like the personality test Myers-Briggs. When you make a choice, we score you on those factors and that’s what influences your detective profile. And as those scores change, your profile changes from one of eight possibilities.”
These eight personalities are the CEO, Inventor, Protector, Adventurer, Sly Fox, Mastermind, Hero, and Politician. It isn’t just dialogue that decides the outcome either, with other actions such as hiding evidence also having an impact.
These decisions also aren’t rated equally, with some actions carrying more weight than others, depending on their severity. The weighting of these actions is recorded in a scriptable object and then balanced to represent the choices being made and to prevent the personality type getting locked in too early.
“We wanted to ensure that all personalities could be achieved and the weighting didn’t favor certain personalities more than others,” says Russ. “With over 70 choices to make, and various other inputs from actions taken in the game, the combination of choices is huge. To check the balance, we created a Detective Style Calculator that loops through every choice in the game 500,000 times making patterns of choices…Each time a contributing choice or action is made, the system updates and the journal is refreshed.”

How you solve puzzles in Jenny LeClue is fairly straightforward for most of the game. You’ll be presented with five clues and asked to pick the two that link together in order to solve the case. But as the game progresses, you will encounter certain situations that give you a little more freedom when wrapping things up. In these cases, you’ll be offered all of the evidence you’ve found throughout the game: from conversations you’ve had to objects you’ve collected. None of the solutions that you can present will be wrong, but the combinations will produce different responses depending on what evidence you’ve picked up and what you attach the most meaning to. It will also change the tone of Jenny’s summary of events.
“If you pick the one that we consider the most important that will probably give you the biggest final description of the case,” says Tillett. “But each of those things are valid. It’s just the combinations. That is super hectic -- we have a whole bunch of clues that you can pick and we have dialogue that is tailored to every combination that you make. So that one is an example of where we really did go all in with the branching and if we had done that throughout the entire game, I guess it would have been out in about fifteen years.”
How this all works is that depending on the choices selected, the game will add or remove certain lines of dialogue for each piece of evidence. This meant the team will had to test all the possible variants to check it all sounded natural, and that it didn’t feel unnecessarily stiff or robotic. Again, this decision was made to help prioritize the personality of the lead in the game, with Russ stating that it was meant to demonstrate how Jenny’s world becomes increasingly less black and white as the game progresses. Whereas before puzzles had a clear solution, Jenny now has to pick what information to give meaning to and what leads to follow. 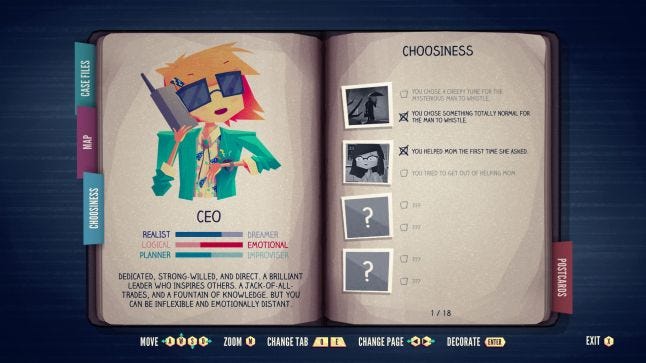 One result of all this is that it allowed the developers to introduce a certain level of “choosiness” into their game, while still giving them room to experiment. In Jenny LeClue, for example, some of the decisions that players will make will have a democratic effect on influencing later volumes. This is a bold strategy, which collectively gives players a lot of influence over how the story will evolve in later games.
“For us, it’s an interesting experiment, this idea of, ‘What if the player affects the way we plot the game going forward and affects us and changes the way that we make the game for part 2,’” says Russ. “And again, it would be nearly impossible to account for every choice for players, so we thought a reasonable choice would be a democratic one. To us, it’s interesting because it changes the way we’ll make that game, the second volume, and kind of how we think about it.”
Asked for advice on tackling branching narrative in games Russ said, “It’s just thinking big picture…and how do the choices reflect what’s important to you about the story. For us, it is very character-driven, that’s what is important to us, so we really focused on the choices reflecting that. But it’s also acknowledging that it is all an illusion…it’s all the framing and the perception of how valid choices and branching are in a game…So not sweating that too much.”
MobileConsole
Get daily news, dev blogs, and stories from Game Developer straight to your inbox
Subscribe