Pillow Castle's Superliminal is a particularly unique puzzler that snuck onto the Epic Games Store last year. Its test chamber-themed perspective puzzles owe a lot to Valve's Portal, but it manages to stand out by constantly toying with the player's sense of scale, shape and size.

Recently, Superliminal lead developer Albert Shih dropped by the GDC Twitch channel for a chat about the game's design and development, and was able to share some insight on what it took to make a mind-breaking puzzler while walking in Valve's footsteps.

Below, we've gathered some of his explanations about how the object re-sizing mechanic works, and explanations for how he and his colleagues turned them into fantastic puzzles.

Objects that are exactly the size you perceive them to be 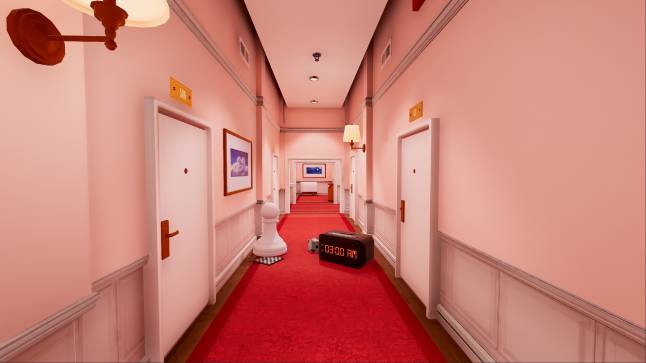 First, a quick explainer for how Superliminal's puzzles work on the player end. In this game, players can pick up different objects, and depending on the distance they are picked up at, the game will scale the object's size to be exactly what it seems to be on the screen.

"It's all based off the idea that if you pretend to pinch the leaning Tower of Pisa it looks like it should be a certain size," said Shih. "In this game, I'm trying to fulfill that illusion."

The trick here, Shih explained, is that the game is generally trying to keep objects as large as possible and as far as possible as it can always be. "So it's always projected as far into the distance...so if there’s a wall behind it we’ll try to find the point on the wall that you know it will be before it kind of collides with anything."

According to Shih, the "easy" part of this game logic is that the game then calculates if an object is twice as far away, it gets twice as big, and vice versa. This even works in different fields-of-view, a possibility Shih himself admitted he didn't fully understand.

"The hard part is actually finding out how far the object should go. Imagine you have a very weirdly-shaped object...let's say you have a sponge. It has a ton of holes in it and maybe you have a background that's really complicated and you want to make sure it doesn't clip into the background.

"We did a lot of trial and error and it's just like a very dense layer of raycast that we're doing to more or less estimate where it should land. Even if it's just a little bit off, it's a little bit closer than it should be, it's fine, as long as it doesn't feel unfair."

From here, Superliminal uses these resizing objects to essentially be a series of solvable optical illusions. These go hand-in-hand with some other clever optical illusions that are created in Unity, ranging from two-dimensional paintings that appear to be 3D objects, hallways that turn out to be painted walls, and a host of other twisted shapes and tricks that mess with player perception.

"Some of [these illusions] are surprisingly simple and some of the hard parts are surprisingly hard," said Shih. "The easy part is if you're trying to do a simple projection that looks like something else, you just have a camera stacked on a projector, right? The camera takes the image and the projector spits out the image. The hard part is actually where depth is involved because the projectors in Unity don't have good depth."

Shih credited Superliminal graphics programmer Phil Fortier with solving these unique programs. "He basically hacked some kind of a system that uses shadow maps that ends up taking into account for depth and all that." 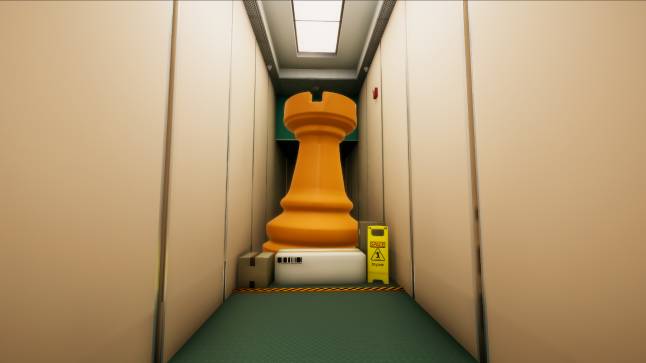 Shih explained that originally, Superliminal was just two puzzles created during his years at college that evolved for a demo opportunity at the Tokyo Game Show.

When it came time to develop a full commercial product, Shih explained that he evolved the game's puzzles by sticking to his preferred philosophy of puzzle design. "The ones that I found the most interesting was kind of like Antichamber, you know puzzle games that were more about seeing something new and trying to think outside the box as opposed to like a sudoku puzzle, right?"

"Like you know the mechanics and you know all the elements, but it’s more about mastery, it’s more about a series of steps. So I definitely tried to focus on finding ways that would give players different types of epiphanies. If some people play this game, they might say oh, it’s not necessarily scratching that mastery itch but there’s a lot of cool and interesting stuff in it."

Shih pointed out that Portal is in fact, one of these kinds of games. He analogized Portal's momentum puzzles with Superliminal's scale-driven ones, pointing out that in both games, players are trying to use the tools they have to achieve those "ah-ha!" moments.

To add more depth to the game's puzzles, Shih explained that the game's level and environment design needed to evoke a specific sense of curiosity with players as well. "We [wanted] this space to be interesting enough that people will want to look around and be like ‘oh what is this, is this part of the puzzle? Is this something?’ Because then that makes the space feel more alive as opposed to just like I’m going from point A to point B I don’t need to care about anything in between," he explained.

This then led to a discussion about puzzle difficulty and playtesting. While game players are usually invested in learning a puzzle game's logic and language, there's still a fine art in making sure a game's puzzles are something worth solving.

Shih had some interesting observations on this particular learning curve. "Usually I’m actually happy when players miss the most obvious things, because...even if you miss [the solution], eventually you’ll look around enough and find it, right? I think the opposite case is when players go in the room and they immediately figure it out."

To help players make sure they were solving the "right" puzzle, Shih said one key feature to develop was the game's clamber mechanic (which he credited to designer Logan Fieth). The mechanic was created to essentially solve if a player needed "two jumps" instead of "one jump" to climb over and object, but Shih said its existence is an acknowledgement of a need for discrete states in puzzle games.

"Usually in puzzle games you want really discrete states, right? And what that means is like you want people to know exactly when you’ve kind of achieved or failed a state. You don’t want to keep it ambiguous. So if they get it, they immediately get it, and if they don’t they know they’re not there," he explained.

"What’s difficult about a game where you can resize stuff and...that it makes for example jumping on things much more difficult. In this game, because scaling is on a range, it means that your jumping can also feel uncertain at times...and that just feels bad."

"So that’s why in the end we decided that adding this mantling thing would help make the game feel a lot more discrete, help make it more easily understandable when you solve the puzzle or not."

This mindset proved helpful especially for scaling the complexity and context of Superliminal's puzzles, which eventually take players into the corridors "behind" the experiment labs, and introduce an array of mind-bending possibilities that stretch player notions of perceived space.

Be sure to follow the GDC Twitch channel for more developer interviews and select GDC talks.