Designing for horror and hope in A Plague Tale: Innocence

In the video game world, rats don't get enough respect. While Ratatouille and Pizza Rat may wow the public with and reveal the truth of the human condition, video game rats are just background noise and cannon fodder.

But in Asobo Studio's A Plague Tale: Innocence, rats may carry a sickness called "the Bite," but it's humanity that's the disease, and the rats, the rats my friends, are the cure.

The game is a stealth adventure that shows how studios have been able to follow the success of narrative adventures like Uncharted while working on a smaller budget. Earlier this month, Asobo Studio game director Kevin Choteau and narrative director Sebastien Renard dropped by the GDC Twitch channel for a conversation about A Plague Tale's design and development.

We've sliced out some key bits of Choteau and Renard's discussion about the making of the game, including some insight into the game's rat-swarm system, and making meaningful narrative moments that can live outside of cutscenes.

This conversation has been edited for context and clarity 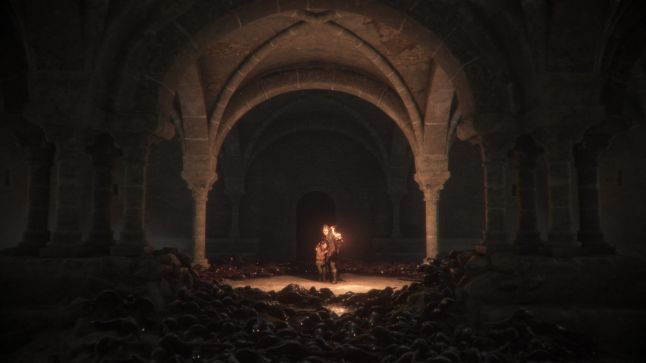 Choteau: It was a huge technical challenge. The difficult part is at some point in the game you have two rats on the screen and some others you need to have a huge number of rats. They need to be believable when they are alone or in halls.

So we decided to go the [behavioral] way, and not through a simulation. So they are really AI, their own behavior, with a bit of pathfinding. We share that between many entities so it doesn’t cost too much.

We’ve done a lot of video analysis of farmers hunting rats at night. There are strange videos you are looking for when developing a game.

Renard: We needed to see how they move as a swarm, you know. What they look like, especially in the dark. It’s all about creating this sensation of all these thousands of creatures. Basically, we have 5,000 rats on screen in real time.

So how to create this impression of a swarm, and like Kevin said, each of these rats is independent from the others, so you could actually, if you were able to follow it, you would see each rat it has its own path.

Choteau: You can isolate each rat from the others and see where it goes, this is why we went with behavioral and AI methods, and not a particle effect or something.

Building bonds between the player and their AI companions

Renard: As the game was progressing we kind of drew up this relationship little by little. We knew that we needed to have these beautiful moments, especially because the game is pretty dark.

We’re realizing this today as [reviewers] are saying we are almost sadistic with our characters. So because it was all about the contrast between their relationship and the world in which they live, we knew it would [emerge] through dialogue and scripted events.

But the main challenge was to make them fluid you know, and integrate them in the game flow as organically as possible. We start with the writing because you’re going to say ‘what are they going to talk about in which step of their relationship?' and then you have to of course you have to make it real.

Which includes…a lot of people. Animators, programmers, etc. to make the transitions, the camera, the actual physical link between the two characters who have all these really fluid…

Choteau: At some point we had very few of these moments in the game. It wasn’t something we were diving too much into. But then we realized that nothing was really building up in terms of their relationship. Everything was going through cinematics. It’s not as good as doing true-to-gameplay, you know?

It's better to convey emotion when you’re playing it than when you cannot control it fully, because to take control of the character, it was impossible to add more of these moments. Sometimes it was a bit scary because ‘oh, maybe it’s starting to be a bit too cheesy’ or ‘oh we are going too far’ and ‘the contrast is too much’

But it’s the only way to make some progress, you know? For example, the flowers you can pick up in the game, we were looking for a collectible to real word exploration and we wanted to create something that [felt right].

At some point, one designer on the team said “what about flowers, you know? Hugo loves flowers and it's something that he can share with Amicia [even though] it’s not her thing.” It would be a touching moment where they are together, very close, touching in a very different way. 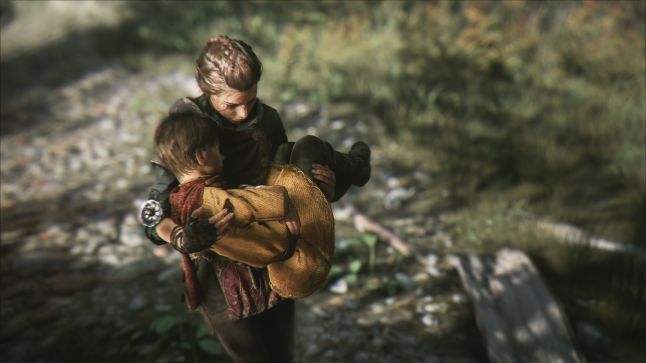 Hugo [puts] the flower in Amicia’s hair and she will [repeat that] for the whole rest of the game. At first, we laughed, to be honest. We thought it’s a bit too much, too cheesy. But when we thought about it for a week, we said “but it’s a brilliant idea.” something that Hugo can do and you—it’s something children can do.

When you go in the forest with a child, they often collect flowers and give it back to you. [They give them] to their mother, the father, it's something like that. It’s life, it’s not cheesy. It’s life.

Renard: And...it brings emotion to something that’s basically part of the gameplay. So yeah, it was just perfect. And then the challenge like with all the dialogue in the game was to make it sound real, which was another long term workshop.

But we managed to find the balance. It took time, but we’re quite happy with the way it eventually ended up.

How hard should game puzzles be in a narrative adventure story?

Choteau: Working on that was all about playtesting. We’ve playtested all the puzzles many many times because we took time to realize we were [making] an adventure game and people don’t expect that much challenge in this kind of game.

It’s funny because now players are finding it a bit too easy. At some point, the game was really, really, really too hard. Every puzzle was a nightmare. And then you just completely destroyed the pacing of the story. If you struggle too much on the [simple puzzles], the story is destroyed.

You have to go back and invest yourself into the story because you spent too much time struggling on something.

Renard: Basically as we were working on the game and failing etc., at the same time the vision of the game was getting refined. [It was] getting more and more precise, and at some point we’re like, "yeah this appears to be a really story-driven adventure," so we need to tune the game in order to preserve the story and make it a fluid experience.

So the game is not as difficult as it could have been but it’s for the best. We tried it, it wasn’t good for the whole experience.

Choteau: We were not sure we could write a story that was moving so we invested into our gameplay. If we cannot tell a story efficiently, at least we would have a challenge. It’s stupid but it's like that!

And we realize that we are doing something with our story and the gameplay was not fitting it anymore. Because yeah we were destroying the pacing and the whole thing of this road trip, I would say.

Using your characters as your tentpoles 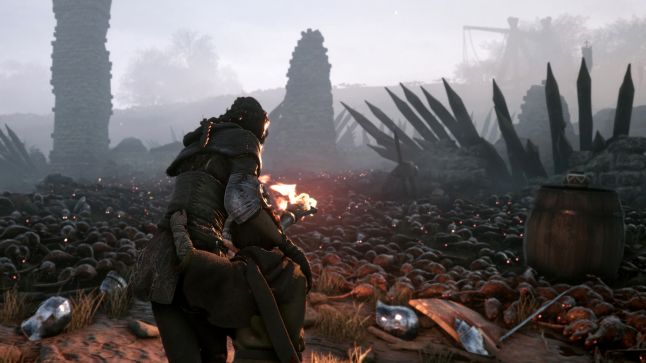 Renard: Work on your characters. I think it's the main thing. And we know that when you build a story, it starts with your characters because there are obstacles, fears, etc. that are going to [bring them to life] and give you enough material to create and nourish the bones.

It really starts with the characters, and then it's a matter of respecting them enough to never break their character. We knew from the beginning that Amicia wasn’t a warrior, she’s not a trained warrior. So it was all about the way she was going to evolve.

For example, her connection to violence. So we put a lot of effort for example into the details of how she’s going to experience her first kill for example. Which was very [traumatizing] and several reviewers noted it that yeah, it brought a lot of realism to the game and it helps the empathy.

So I think it really truly starts with this. You have to respect and love your characters in order for others to love them. And you have to do that throughout the entire story, which can be a challenge because of course, we know games development can be complex.

It can be really complicated. So you have to stick with it, so it's your responsibility as a narrative designer of course, but then it's also the way the whole team is going to keep conveying these. So you have to onboard everybody.

Choteau: It's very easy to betray your character for a bad reason. At the beginning of chapter five, you know how they’re walking on the shore? When you wrote the first lines for that Hugo was talking about the meta-story, he would say, “Why am I here, Why does he do that? We need to go to the chateau with this guy.”

That's not a five-year-old boy. It’s too mature for a boy like that. A five-year-old would talk about what he’s seeing. Like you notice on the shore, in the morning, there’s frogs, there's birds. And now he’s running away and playing with the frogs and they’re not talking about the story at all because it’s not something that he would do. 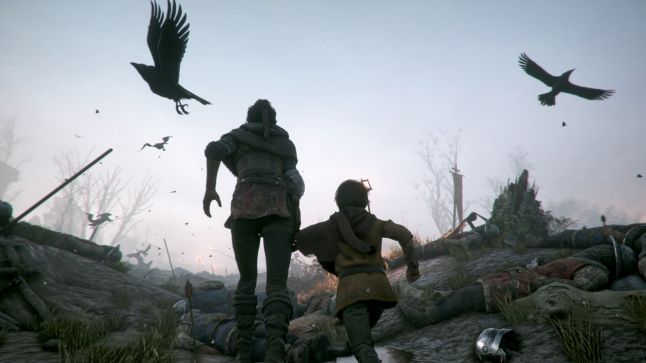 Renard: It's so true. And it's interesting because it's basically the moment to moment experience of the player versus my desire to tell something about the meta-story, and I wanted to make sure they would understand what was going on.

But in this case, it was not a good idea because it was basically breaking this young character. He’s five years old so it would be too far. Which doesn’t mean that we didn’t do it later in the game but you must do it at the right moment.

But you must not be afraid to fail. I think that’s one of the big parts of being a narrative designer. You will get feedback from your teams and the leads and sometimes it can— it touches you deeply, but its just part of the work.

Like we said, failing is OK. Because that’s basically the way all the games are being made. We could say iterating. Ok, you do it, you test. If it doesn’t work you go back to your copy and do it again until it works.