Designing for deck-building in video games

Gamasutra speaks with designers behind SteamWorld Quest, Hand of Fate, Slay the Spire, and Cultist Simulator to find out tips and methods for card-based design in video games.
Kris Graft
Publisher
March 29, 2019

Card-based games and deck-building elements have been in video games for years now, often mixing with known genres to create new, yet familiar experiences. From completely randomized systems to a deep focus on trial and error, developers have been toying with this sub-genre in different ways.

We spoke with a number of developers about their experiences with deck-building design, and what tips they can share with other developers who want to implement these systems in current or future projects.

Familiarity as a tool

“The experience you get from a game like Magic: the Gathering or Hearthstone or Netrunner is similar to that of a classic RPG, that is, taking on the role of a hero wielding magic spells and weaponry (or cyberspace hacking tools) to defeat a powerful enemy,” the pair said in a jointly-written email. “What card games do is take that same fundamental experience and bundle it up in a different way, changing how you view and interact with something you may already be familiar with on a different level.”

The thinking process behind cards in SteamWorld Quest is to make them easily recognizable, even if the player hasn’t learned the full details yet. Seeing a card called “Heroic Strike” that has a picture of a sword being swung on it is likely to give an idea of what it does. But as they argue, the pacing is key for games like these. It’s important to know when it’s time to introduce new cards to prevent players to feel overwhelmed early on. 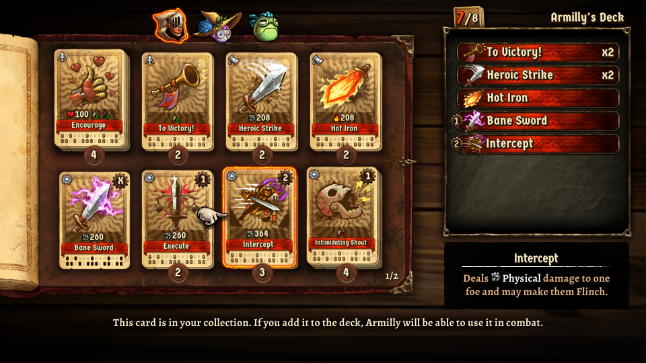 “Complexity needs to ramp up fast enough to keep the player constantly interested and wanting to find out more, but not so quickly that it becomes overwhelming. This is especially crucial when we introduce new player characters as we want them to feel appealing and unique right away without inundating the player with new concepts. It’s a tricky balance.”

Johansson and Olsén ran into another issue during development, since players weren’t encouraged to experiment with synergies and stock cards for later, and would just use whatever came from the deck instantly. By taking influences from Fate/Grand Order, they came up with chains, which grant a bonus effect each turn if players use a specific combination of cards. This later evolved into Heroic Chains: Playing three cards from the same hero in the same turn.

“Be prepared to experiment a lot,” they add. “It’s important to remember that deck-building is gameplay. Players will spend a lot of time simply sitting in the UI thinking about the cards in their collection, trying different ideas in their heads, putting together decks they think will be powerful or interesting before they ever come close to fighting an actual encounter. Don’t restrict your ability to balance cards by giving yourself too few variables to adjust, or locking yourself into designs that can’t be tweaked.”

Maciej Biedrzycki, co-founder and chief game architect over at Thing Trunk, spent a lot of time with the team finding the right balance to create simple designs for Book of Demons without ending up being too simplistic. That’s how they came up with a core idea, fitting cards into three categories: Skills, Items, and Spells.

“It's not just simpler to operate and explain to the players, but it also gives them more strategic options to play with,” Biedrzycki explains. “Deciding between an item and a spell when you have limited card slots is an interesting choice.”

But again, balancing the cards was a long and challenging process. In Book of Demons, there are 40 card archetypes (without counting upgrades, magical or legendary variants) for each of the three classes the in game. If you take into account the multiple synergies that players can create between different cards, making sure there are no overpowered builds is virtually impossible. “The player can equip 10 at any given time, and if this sounds like a manageable number, doing the math gives about 3 quadrillion possible builds a player could be using.” 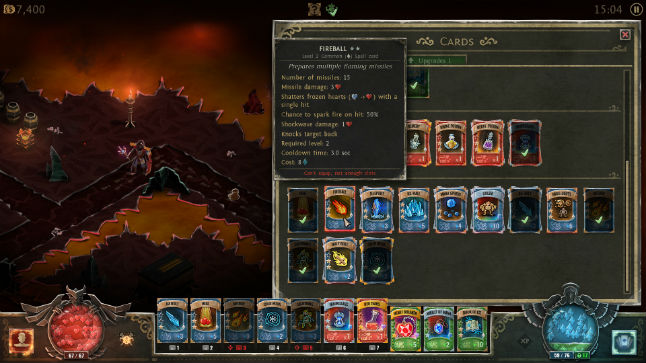 Two-and-a-half years of Early Access was instrumental in the design of decks for Book of Demons, giving the developers time to make hundreds, if not thousands of changes, even redesigning some cards from scratch. Along with finding overpowered or underpowered cards and combinations, Thing Trunk pushed for more depth for hardcore players, leading to the game's upgrade system.

“Designing a card system into your game can be a lot of fun and it can help you introduce more abstract rules into the game," Biedrzycki says. "But it's definitely not a miracle solution that can make every game better. If you think there is a place for a card system in your game, I would recommend doing a fast prototype just to see how it works. The game should already be fun with just a few basic cards. If it's not, then you should get back to the drawing board, adding more cards with more exotic effects will not make the system work.”

For Mega Crit Games’ co-founder and developer Anthony Giovannetti, the idea of using cards in Slay The Spire came from himself as a player. Games like Magic: The Gathering and Dominion made him into a deck-building fan, whereas roguelike aspects of the game served as a strong mechanical framework for why the player is constantly picking new cards to add to their deck. Draft formats like Hearthstone's Arena mode were also an inspiration.

“Battling with cards was fundamental to the idea of the game. As a result, I don't really think there were any particularly hard challenges in this area,” Giovannetti says. “If anything, if you think of combat in Slay the Spire as an analog for a JRPG fight -- cards were a huge and easy win in terms of adding complexity and depth to a round of turn-based combat.”

For them, Early Access showcased a tendency for players always requesting buffing for cards, and it was important to be aware of this when implementing any sort of changes to them. Opting for taking these suggestions with a grain of salt and relying on data was key to maintain balance. “Players are better at letting you know when a card is unsatisfying than knowing if the card is actually good or not," Giovannetti says.

Register cards on a database from day one

Daily challenges also went under heavy changes during development thanks to players’ feedback. In the beginning, they were meant to be challenges to see how far people would make it. But they opted for using weird modifiers in the end. Players would still compete, but the focus was on how they could manage to win daily challenges rather than just trying to finish it.

“Because [cards] can open up such a wide possibility space, it is integral that data collection and playtesting is started on them at a really early stage in the process, otherwise balance is going to be a mess,” Giovannetti adds.

Communications manager and designer Lee May of Defiant says that balancing player agency was key during Hand of Fate’s development process. This started with a past project for mobile, Heroes Call, which used randomization in its dungeon design, but the player never got to see it since it was hidden in the background. Reflecting on it, May says that Defiant would have probably saved a lot of time with a hand-crafted linear experience. 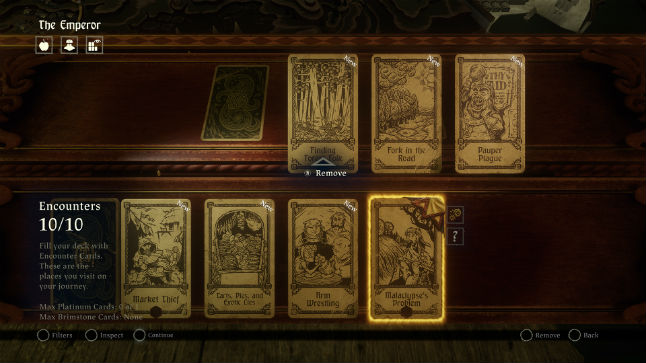 “The wonderful thing we gained when we started exploring deck building was that we could still randomize the player's experience, but we could bring the player into it and give them a sense of agency and ownership of that randomization,” May explains. “The deck is replacing the dungeon master, rather than representing the player's troops or combat moves, which means that many of the lessons we learned are rather specific to our own game, and less applicable to something like your Gwents, Hearthstones, or Slay the Spires.”

Creative director Morgan Jaffit, similar to what happened with Heroes Call, made the decision of taking the difficult route once more: All cards are shuffled and taken from an actual internal base, rather than being completely randomized. This decision, curiously, comes from his past as stage magician.

“The cards are all physical objects, as are their decks -- and so whenever the game needs to search a deck, we're actually shuffling through a stack of game objects until we get the card required...It would have been infinitely easier to fake all of that, but we don't, because of a magician's pride. This, of course, is madness -- if there's one thing magicians are known for, it's cheating with cards, but here we are.”

Their experience working in both Hand of Fates taught them, once more, on the importance of keeping track of everything in an up to date database. “Also know that power creep is bound to happen, particularly if you add content in waves, so expect to do multiple balance passes,” May says. “Be aware that there is such a thing as too much choice -- asking the player to choose five cards from their deck leads to much more interesting decision-making than asking them to choose 20.”

Game designer and writer Alexis Kennedy also have a few tips to share about Weather Factory’s Cultist Simulator for studios who are looking to focus on verbal-abstract oriented experiences around cards.

From a visual standpoint, finding an art style that is both distinctive and cheap to produce in bulk should be a priority. And whenever you start adding text onto cards, always make sure to do a preview of how it’s gonna look. “Treat the problem of detailed card information as a first-rank UI problem,” says Kennedy. “'Bung that stuff in a tooltip' isn't enough.” 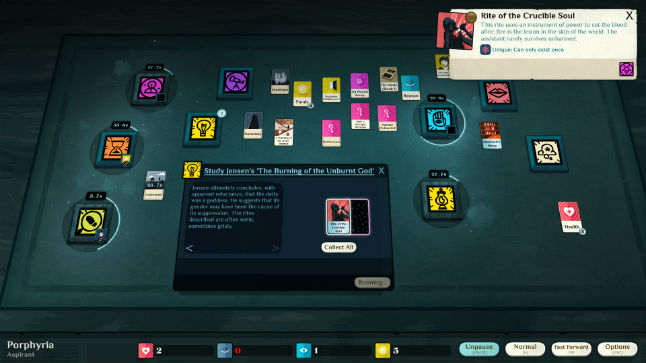 Player expectations demand a keen eye to detect all possible issues that stacking could produce, such as what happens when a card returns to a stack that is no longer there, what if a second card returns on top of the previous one, or if the card now has different properties than before. Additionally, if most cards are permanent, players will have strong feelings when they get destroyed.

Kennedy develops on his frustration with the snap-to-grid functionality, and how important it turned out to be for the overall experience. “I can't believe we launched without snap-to-grid. I wanted to have our UI dev put it in last, but he got hung up on SFX instead. I should have unhung him and I should have put it in the feature list much earlier. Someone modded it on like day three.”

“More generally, the feedback [we gathered] was 'I want these cards to go to the right place without worrying about it.' Of course, it's a typical UI problem: every player has a different preference for what 'go to the right place' means,” he explains. “We implemented some simple stuff to deal with this, but next game, I think the answer will be to turn the question around -- to make placing the cards something that has explicit value and interest in the game.”