"From all the sources, and after a lot of iteration separating mountain biomes, grasslands, forests, we were able to boil it down to two main biomes: essentially lush and dry."
Chris Kerr
News Editor
July 20, 2021

Creating open-world games comes with its own unique set of challenges. In Assassin's Creed Valhalla, for instance, players are let loose on a beautiful rendition of 9th Century England and given free rein to go on all manner of Viking adventures.

As players explore the world -- raiding, questing, or delving into long-forgotten ruins -- it was important for the dev team at Ubisoft that each individual undertaking, along with the core narrative, feel like a memorable journey worthy of song.

Speaking at GDC 2021, Valhalla art director Vladimir Eskandar and environment artist Adrien Paguet-Brunella explained the studio worked to achieve that goal by creating a natural world filled with static biomes and seasons. The hope was that as players traversed each unique part of the map -- galloping from lush fields to crumbling peaks -- the passing environments and seasons would create the illusion of being on a sweeping adventure.

To start the process of defining those biomes, Ubisoft imported a scaled-down version of England into its AnvilNext game engine to create a 16km by 16km world template. The studio then honed in on the east coast as the main setting for Valhalla's story, but that decision immediately created a new challenge.

It quickly became apparent that any player who climbed the tallest mountains in that small-scale version of England would be able to see both coastlines, making the map feel incredibly small. To solve that problem, Ubisoft expanded the western side of the world and used mountains to block certain lines of sight, preventing players from peeking behind the curtain and helping to create and maintain a sense of scale. 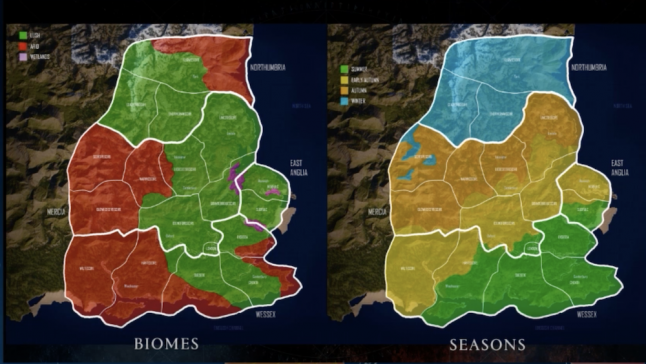 After knocking that curveball into orbit, Ubisoft set about giving the world some structure. The team pulled on historical research and references from recent scouting trips to Norway and England for inspiration, with that process allowing them to create two separate maps (above) that detailed where specific seasons would begin and end (right map) while also establishing clearly defined biomes (left map).

"From all of the sources, and after a lot of iteration separating mountain biomes, grasslands, forests, we were able to boil it down to two main biomes: essentially lush and dry. We also decided to have static seasons throughout the map. The south is summer and north is winter. We did that for a variety of purposes, one of them being to create that sense of a journey," explains Eskandar. 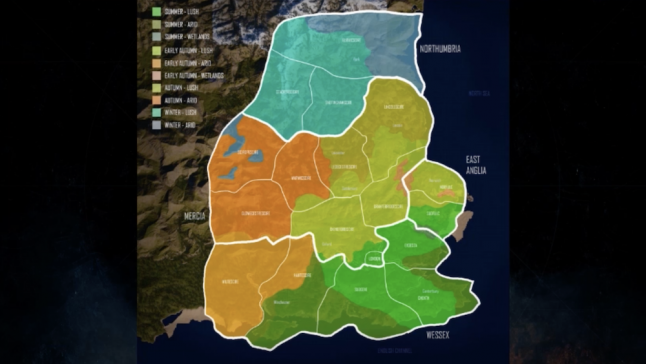 "Combining those two maps gave us our real biomes (above): summer lush, summer dry, autumn lush, autumn dry and so on. That allowed the research to push further in terms of clearly separating the mood between some biomes."

It's interesting to hear Ubisoft wax lyrical about the benefits of static biomes within the context of a massive open world. Want more game dev lessons from GDC 2021? Click here to access additional tips, pointers, and tidbits from the conference.