Designing an engaging and intuitive crafting system for Astroneer

“Way back when, we were talking about whether we should have a tutorial in the game," says Jacob Liechty. "Eventually we figured out that we didn’t have to, which felt pretty good."
Phill Cameron
Blogger
February 22, 2017

Crafting systems can make or break survival games. If it's too shallow, players will lose interest quickly. If it's too finicky, they will quit in frustration. The early access title Astroneer, developed by System Era Softworks, cleverly manages to avoid both of these pitfalls. And survival fans are noticing -- according to Steamspy, it's attracted over a half million players in the two months since it was released.

The game from Seattle studio System Era Softworks drops players onto an alien planet with no real guidance as to what they should do. All you know is that you have a deform tool -- essentially a space vacuum -- that can collect resources, and a backpack that can print out new items (provided you obtain the right ingredients).

From then on, the progression in Astroneer is marked by the objects that you decide to prioritize creating and the goals you set for yourself. Do you choose to stay on the one planet and explore further and further afield in a vehicle? Or do you try to visit other planets in the galaxy as soon as you're equipped to do so? It’s entirely up to you. The freedom in the crafting system is arguably what makes the game so engaging, as it ties neatly into exploration and offers the potential for self-expression and independence.

Jacob Liechty, one of the lead designers on the game, elaborates on the open-ended nature of the gameplay: The whole 3D crafting thing is sort of new," he says. “Most the time in this genre, you have a menu, and if you have a menu you have words that tell you what to do. We don’t have a whole lot of that.” 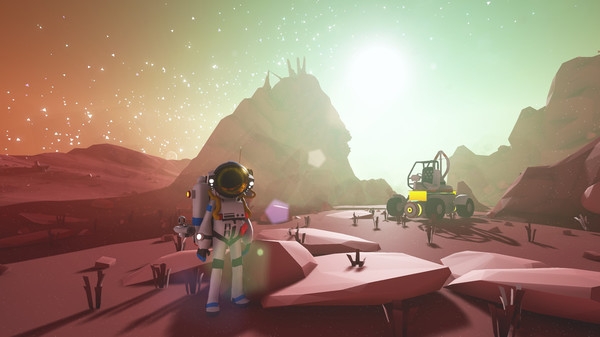 In place of stifling tutorials, complicated recipes, and pages upon pages of wordy menus, Astroneer employs simple visual clues to inform players of how to craft items with the resources they collect. These hints come in the form of blue holograms in the shape of the resources needed, as well as an inventory that displays all the objects you’ve collected so far.

For example, if you needed to craft a research station, you’d check your backpack for two pieces of compound to then slot them into their respective places on the module. This approach to building makes the game instantly more accessible and retains the player’s attention.

“Way back when, we were talking about whether we should have a tutorial in the game," says Liechty. "Eventually we figured out that we didn’t have to, which felt pretty good."

Give the player variety

Because there’s no conventional tutorial in the game, players can also prioritize different goals based on how they’d personally like to proceed. Want to build a vehicle? Well, you can. How about expanding your base? That’s also possible. This non-linear approach is important for keeping the crafting engaging, as players have a bunch of goals that they can work towards in any order.

“Currently in the game, it’s almost entirely player stories wrapped around what you’re trying to build,” Liechty comments. “There’s like 20-30 recipes for things that you can print with the backpack or with the bigger printers, like the vehicle printers. You can kind of work through those things and piece them together in different ways, and in some way tell your own story. Some of those stories…we’d never even anticipated.” 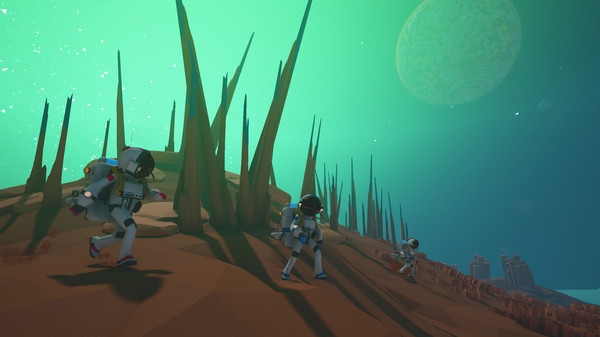 Vehicle creation is an area where this is the case. The number of possible combinations has prompted players to produce a wide range of extravagant creations, including convoys that can carry multiple modules on-board increasing the vehicle’s functionality. This is achievable because the crafted components can fit together in an assortment of fascinating ways.

Survival as a motivation for crafting

Moreso than is typical in survival games, exploration in Astroneer is tied directly into the crafting mechanics. In order to stray further from the starting point, you’ll need to constantly build tethers, tanks, and batteries, to stay supplied with oxygen and energy. Without this, you’ll either suffocate or run out of the power that’s vital for harvesting supplies.

“The desire to survive forces you to craft and helps you to strike out further so you can do more digging,” says Liechty. “That’s kind of like the core idea of the game. If you place rewards off in the distance, people want those rewards.” 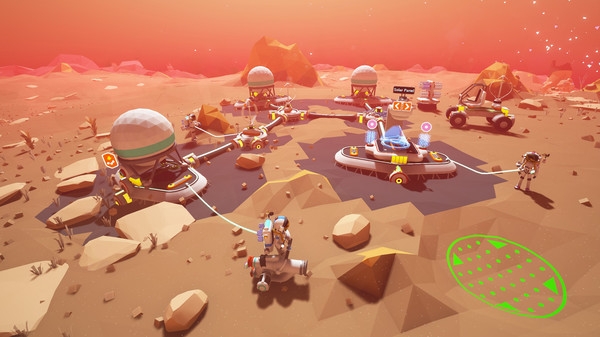 The interconnectivity of the game’s mechanics means the player is urged to constantly engage with the crafting system, to broaden the area that they can actually cover and create an adequate system to support life.

Crafting is also responsible for increasing your ability to personalize your game world. In Astroneer, the entire environment can be moulded by using the deform tool, but this requires a sufficient supply of power to function.

By crafting devices that both store and produce energy, it’s possible to devote longer amounts of time to this pursuit. What this essentially means is players can eventually create more extravagant monuments from the terrain, as they progress. This is another reward for crafting, and together with the existing mechanics makes for a multi-faceted experience.

“We talked about terrain deformation from day one,” states Liechty. “I think the entire game was built around that idea, the idea that you can build anything. You can build immediately useful things, or just make sculptures. You can foster the creativity angle that way. Sculpting the terrain is what people want to do in the game. It’s kind of like the output valve.” 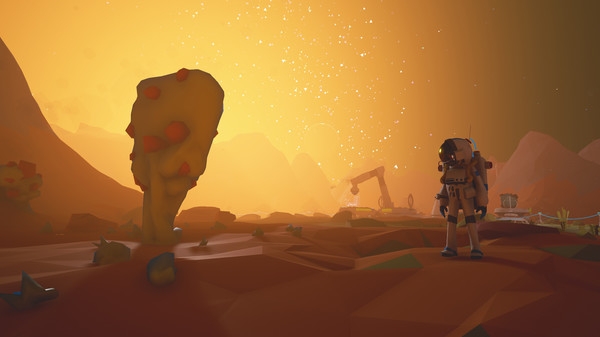 “I think the hard part was tying together the crafting system, the space fantasy, and the resource management,” he adds. The end result is a game built around satisfying mechanics that allow players to fluidly shift between survival and self-expression.