For a game about piloting giant mechs, it sure feels good to run around on foot in Titanfall. Well, maybe not on foot, exactly, since when you’re outside your titan you’ll mostly be leaping through the air and running along walls.

This is a game in which you can traverse levels at fantastic speed and explore their full vertical heights, using a moveset which not only rewards skill but is also surprisingly intuitive to grasp.

And it feels great, even with a gamepad. Titanfall is a model of firstperson fluidity and precision on gamepad, while also capturing a sense of your pilot’s – and titan’s – physical body. This moveset and sense of motion emerged from the firstperson shooter greats.

But in sculpting the game’s actual feel, developer Respawn was also looking back to another classic, Halo: Combat Evolved. “It’s still the gold standard,” says senior software engineer Rayme Vinson. As he began to block out the controls for the game that would become Titanfall, he’d load up Halo, the second level, and play its first encounter over and over again, killing off all the AI apart from a single grunt. “Then I could dance around him and see what [Bungie] did,” he says, noting how it deals with aim-assist, and how its stable view as you walk gets across a sense of Master Chief’s indomitability. 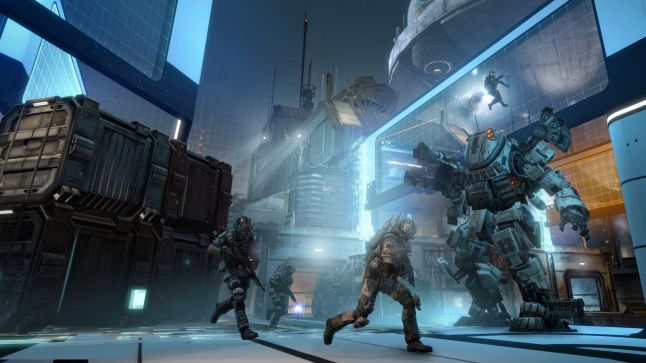 The team didn’t adopt all Halo’s lessons by any means. For instance, Titanfall has view-bob to communicate an awareness of physical motion, but they wanted it to maintain some of Halo’s steadiness. “Intuiting from what they did, it seemed they had a big focus on making it so players could shoot the bad guys as easily as possible and not get motion sick, and not getting motion sick became a big part of Titanfall,” says multiplayer design lead Todd Alderman.

Motion sickness in firstperson games is complex and subjective, but Respawn found that when they added view-bob but kept the crosshair fixed to the center of the screen it would feel like the player character was constantly looking left-right-left-right, causing some players to feel nauseous.

“I think a big thing that causes motion sickness is a disconnect between what you’re seeing on screen and what you’re trying to do,” says programmer lead software engineer John Haggerty. “Any time we move the view without your input that can cause motion sickness.”

Alongside these fundamentals, Respawn also started to develop Titanfall’s emblematic wall-run, which takes a central part in its overall movement system because it grants the speed boost that gives both games their kinetic emphasis. The wall-run also feels skillful to pull off, despite actually being simple to initiate. 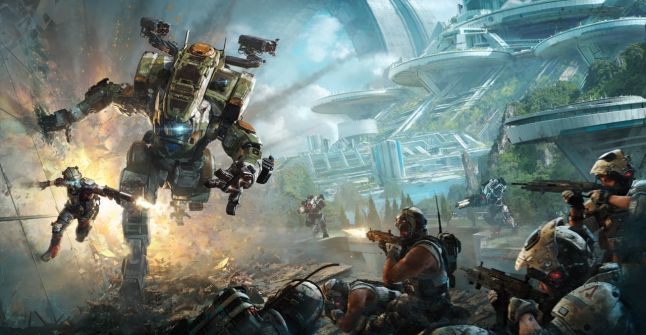 Haggerty began to develop the wall-running system by allowing players to freely walk on walls by pulling towards them instead of having gravity pull them down. He then tested it in Half-Life 2, specifically the section just after you get the pistol, where train tracks run through a walled channel.

“I was just wall-running around that for days, messing around,” he laughs. “You do it a bit, something goes wrong so you change the code, and then you do it again, and you do it a few hundred times and you end up with something that’s reasonable.” From there it was a matter of adding features like gravity gradually pulling the player down over time and refining with designers as they implemented it in levels.

To the player it’s a matter of jumping into wall and they simply start running along it. For the game, it meant having to define between slopes and walls (“slopes are complicated”) and also having it constantly check around the player for surfaces that can be run along, disregarding such elements as the sides of steps.

One change between Titanfall and Titanfall 2 was to stop players who were starting their runs near the tops of walls from falling off, because the arc took them over the top. It sounds like a simple fix, but it was a challenge since it added yet another thing for the game to need to check about the world to an already computationally expensive list.

Part of its easy feel is down to the way Titanfall communicates what’s going on, tilting the view away from the wall to indicate that you’re running on it. One thing that was added and immediately made it feel much better was Alderman’s suggestion to tilt the view as a player starts to jump towards a wall but before they begin to run, allowing them to anticipate it. 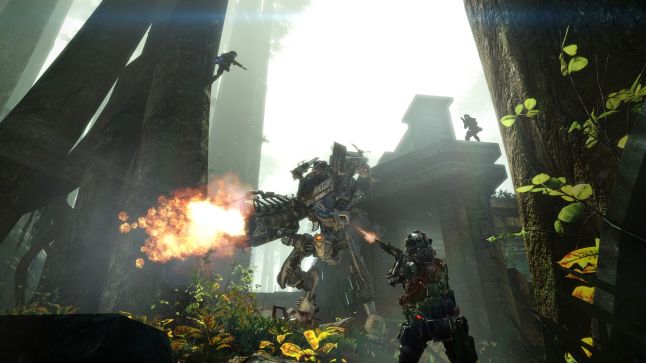 Encouraging players to wall-run in the first place was another matter. “People wouldn’t trust the wall-run and press the A button as quickly as they could, and they’d end up jumping right off it,” says Haggerty. “Training people to trust the wall is hard because it looks like you’re going to fall.” The solution was in level design, whether in the first Titanfall’s training sections or in having early enforced wall-running in Titanfall 2’s campaign.

The next problem was to give players a reason to wall-run. “That’s funny, actually,” Haggerty says. “We’d had wall-running for a while and then it was like, ‘Why would you wall-run when you can just run around?’” This is where wall-running’s speed boost came in, an incentive that came to inform Titanfall’s distinctive speed-through-motion design, in which by performing acrobatics players can traverse the levels at up to 30 mph, well over double a pilot’s sprint speed.

Wall-running itself gives a boost, and jumping off a wall boosts still further. The slide move, achieved when the player hits crouch while sprinting, also grants a small speed boost. “We talked about sliding for a long time and I was always like, ‘Ah, whatever. That’s stupid,’ says Haggerty.

“I ended up doing it one day and threw in a basic slide, and people loved it. A slide is mostly just regular ground-walking movement except you can’t stop or change direction as easily, and it gives you a little boost when you start it. It’s all the same code, plus some minor tweaks.” 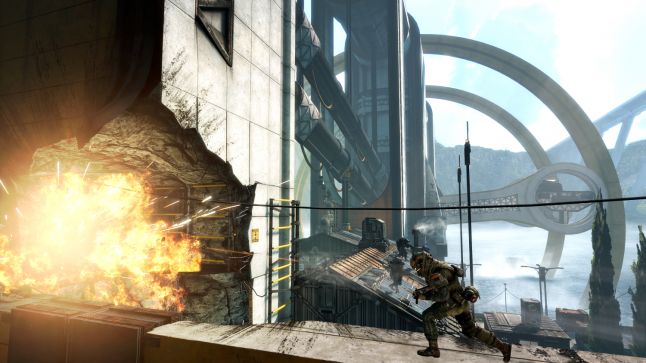 The slide is an important part of high-level play because it allows players to chain speed-boosting moves together on open ground and it enables slide-hopping. This is bunnyhopping technique that involves hitting slide while in the air after jumping, and then repeating by jumping again right after landing. Titanfall also features air-strafing, an inheritance from the Source engine, through which by steering left and right while airborne players can reach the highest speeds.

Pro-play aside, sliding also feels good to pull off. “It’s the movie in their head,” says lead animator Mark Grigsby.

“It’s not only the feeling of it, but the way your gun turns and when you see other players doing the knee-slide, and you want to do it,” says Alderman.

And sliding highlights the role of animation in Titanfall’s control systems. “Everything we’re doing, we think about what it’s going to look like when you do it. When you see someone pulling off these moves, you need to definitely look at them and say, ‘Holy shit, that looks fucking cool,’” says Grigsby. 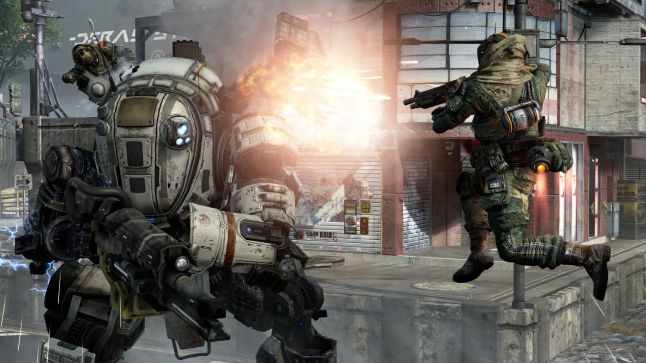 “We try to take into account all of your senses, except maybe taste, but you never know,” says Alderman. “But even the audio for when you slide or double jump, it all plays into it. Where you’re seeing your gun, what it sounds like, the inertia you’re feeling. It all plays into how the end result comes out. So you really have to watch it from every angle.”

“These pilots are in love with wall-running. So when they’re running, they’ll have their gun in one hand and with the other they’ll be caressing the wall,” says Grigsby.

“The first thing thought when I saw it was a surfer riding a big wave; they run their hands in the water,” says community manager Jay Frechette.

The slide was harder to realize. The team first imagined it looking like a baseball player sliding into third base, but having one foot extended and one tucked under the body looked odd from firstperson.

So they started to think of John Woo-style action movies, with the hero sliding on his knees, firing twin Desert Eagles, and this is how players look in thirdperson in the first Titanfall when they perform one. In firstperson, the gun becomes canted, pointing down at a 45 degree angle, to indicate the pose. 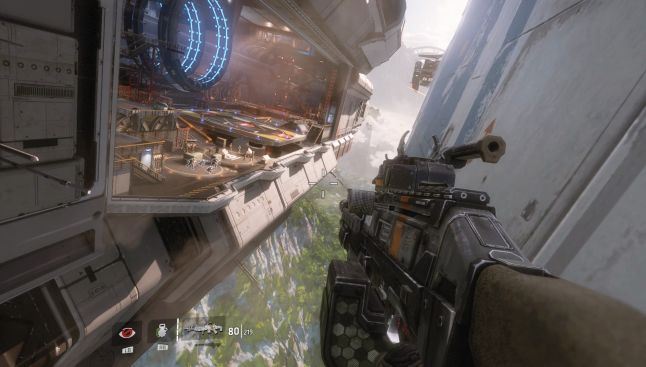 It’s a subtle and largely subconscious reminder of your virtual body. Another reminder is in the way your view springs back to normal after landing from a long fall. The depth of the spring is relative to the height fallen, and a feature that’s down to a quick experiment Vinson made after the system was added that bops your view around when you’re shooting weapons.

“It was the simplest thing I think we’ve ever done because the system was already there, and suddenly it made landing feel way more real, even though the actual mechanic, the movement code, was identical,” he says.

Titanfall’s controls feel great and offer easy access to powerful abilities, and they also possess skill-based depth, allowing experienced players to perform moves that transform the way the game is played at high levels. And yet so many of them are the result of exploring the game’s systems as they came online.

“Just in the moment we had those tools, someone tried a thing, and oh, shit! That works,” says Vinson. “Some are big giant things, and some are the accumulation of lots of tiny things.”