The Ouya game console officially launches June 4th, but has already been sending out Kickstarter backer versions. The game store itself is live. I've had a dev kit console for some time and have been working on an original game for it called Pig Eat Ball. I'm interested in this console, am making a game for it, and want it to do well. It's a low cost console, but doesn't need to come off as cheap. What can make it look cheap and neglected? Quick ports.

Obviously since the Ouya is Android-based many developers have ported their existing games from mobile over to the Ouya. This is fine and many of these games are very polished like Knightmare Tower, Beast Boxing Turbo, and Gun Slugs.

After playing lots of games currently on the Ouya store, I've been seeing a trend in which a few irksome issues keep cropping up. Here is a simple checklist for developers to consider before releasing games to console. This in general could apply to all mobile-to-console, but I'm specifically thinking of the Ouya (could be for GameStick, others too). 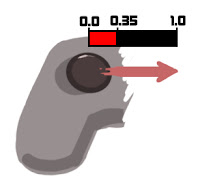 First and foremost--please, PLEASE use a dead zone on your left analog stick input. If you've taken anything from this article, go to your code now, and implement a dead zone. Now. This is really bad, as it's making your play experience worse.

Everything else on the list is good too. Basically it means you really cared about bringing your awesome game to new people. No one likes a sloppy port. No one wants to see "Press Start" in their PC games when they don't support controller input, and no one wants "Tap Screen to Continue" in their console games.

They want to think the neat, new game they are considering purchasing was made special just for their system, just for them. You worked really hard on your game. Ports are annoying--I know from experience. Put in that extra effort, clean up your game some more, and make it a AAA port. Good luck! Gamers will thank you.