Before Muramasa: Demon Blade, there was Odin Sphere. This article explores some design decisions that a small studio, Vanillaware, made around the manpower and technical constraints to create a 20-40 hour game.
Jeremy Kang
Blogger
September 21, 2009

Released by Atlus in 2007, Vanillaware's Odin Sphere was a critically received Action-RPG that was not only a tribute to the glory days of 2D games, it was a 2D-sprite-based masterpiece, still considered gorgeous even by today's standards, as noted in the multiple game reviews.

But more than that, what was more amazing about Odin Sphere in my opinion, was that the team behind the game, Vanillaware, only consisted of 12 members. Expectedly, 7 of which were Artists, 3 were Programmers and with 2 Game Designers (or Planners, in Japanese Game Development lingo).
For a small development team to ship a game that can hold its own against today's 100-man-blockbuster-games environment is no small feat.

I believe that this was made possible by the team making a few very smart and economical Game Design choices that gave the most gameplay-bang for the asset-buck in Odin Sphere, and produced a game that worked around the manpower and technical constraints of a small development team.

Some of the good design choices that I concur with as I played through the game were...

Parallel storylines are always a great excuse to extend the replayability of a game and get more bang-for-your-buck with what you already have. But Odin Sphere does it with much more panache and thought than most others.

Each character's story is actually deeply-intertwined with the at least one other character's storyline, giving players a new perspective on previous stories, while contributing to the overarching story in Odin Sphere, by revealing new details of certain key events previously left ambiguous. The fact that each story is complete in its own right and yet gives enough room for subsequent stories to fill in the gaps is evidence of the thought put into the writing and pacing of the story to ensure its coherence and continuity. 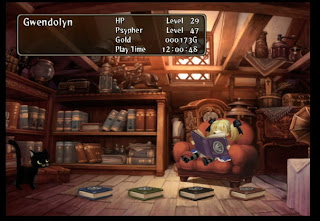 It helps that there is an overall game timeline, which sequences the events in each character's story against those of the other characters and makes the entire story more easily referenced and accessible to players.

Naturally, parallel storylines make the game more "design-heavy", and is a great way to cover up for...

Unlike some other games which shamelessly reuse assets and cover it up with some weak storyline excuse (I'm looking at you, Devil May Cry 4), Odin Sphere's reusing of assets is done with a lot more finesse.

Between 8 -10 areas and an almost equal number of bosses, the repetitive factor that plagues the constant reusing of assets is somewhat nullified by how smartly the game interweaves the character stories with the level orders and the levels themselves.

There is always a convincing reason as to why the different characters are transcending the same few areas, and since the order in which the stories have to be played are pre-determined, certain thought had surely been put into the pacing of which to introduce new areas or bosses with each new storyline.

As an additional cool factor, it's always cool to use a what was previously a boss in one character's story as a playable character later.

To keep the game manageable by a team of 3 programmers, Odin Sphere keeps it core gameplay simple. Run left to right in a "circular" stage, which is essentially a 2D plane connected at both ends, kill all enemies, proceed to next stage. Stages are interconnected predeterminely through a "map." If you break it down, essentially, Odin Sphere can be said to be simply a side-scrolling brawler infused with RPG elements.

Kill Him, and Everything Else that Moves

Things are kept a bit more interesting with the limit imposed by the POW meter and the different 2-4 unique abilities of the different characters. The Designers probably understood that killing all things on screen are inherently fun, albeit or perhaps intentionally old-school, and mixing things up with different character abilities adds to the dynamics of the game and how players would actually tackle the same enemies in different ways.

Perhaps the most understated aspect in Odin Sphere, the complex Recipe System adds substantial depth to the dynamics of the overall game.
In a game that forces you to start from Level 1 with each new character, it is an extremely smart choice, in my opinion, to allow the Recipe Book to remain consistent between the different characters, giving at least a sense of progression as you move from character to character.

It sure helps that the recipes in the game are extremely useful, like helping characters level up faster, giving them access to new power-ups, etc. I don't remember a recent RPG that I played that I felt so empowered simply by "knowledge" and not so much by character stats. 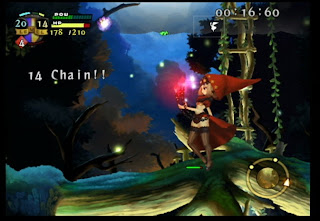 Essentially it is a rather simple feature, but introduces a sort of "management" element and player choice into the game. Players can choose to use Psyphers (floating orbs) from defeated enemies to power up and upgrade their weapons, learning new magic spells in the process, or use it to grow food items, which allow you to regain health.

This choice was an extremely crucial one as I moved from screen to screen due to a number of reasons, the limited inventory, the difficulty of the enemies, and the food recipes were all crucial in my decisions between getting a more powerful weapon or ensuring my survival or saving it up to power up my stats while taking up precious inventory space.

For a simple system that was not at all hard to program, the options that branched out from this resource led to a rather engaging player choice that I consciously thought through every 2-3 screens.

Overall, Odin Sphere is by no means a perfect game, when you consider its technical shortcomings like slowdown and frame rate issues (try fighting Odessa and you will know what I'm talking about), and some general repetitiveness.

But for what it's worth, it's an example of a game that retains much of its charm with the emphasis on "design-heavy" features, like story and resource management elements, while trying to keep the technical and artistic manpower limitations in mind, resulting in a rather deep and engaging game that is greater than the sum of its technically-simple parts.