Many stories start off with a punch. Modern Storyteller's The Forgotten City is no exception, though perhaps not in the way you'd expect. This fascinating adventure, filled with time travel, philosophical questions, and a murder mystery, owes its creation to an unfortunate but fateful punch to the face of Modern Storyteller managing director Nick Pearce.

Pearce, the pen behind Forgotten City's voluminous script met the fist of an unreasonable stranger while heading to his creative writing class. A lawyer by trade before he turned to game design, the slightly traumatic event prompted him to write his short story about the fateful punch. Following enthusiastic reactions, Pearce found his creative energy unlocked and turned that newfound drive toward what would eventually become The Forgotten City.

Now looking back Pearce, laughed about the event. "The joke's on him, I got an awesome story out of this."

A gamer who dabbled with level creation and modding back in the Duke Nukem era, Pearce began noticing these as powerful storytelling tools, particularly the famous Fallout: New Vegas mod, Bounties. Upon venturing into the world of Elder Scrolls V: Skyrim mods, Pearce began an 11-year ordeal that would lead him to create his own studio to see The Forgotten City flourish as an award-winning narrative experience.

Thanks to its location in Melbourne, Modern Storyteller also benefited from a Film Victoria Grant provided by the Australian government for fulfilling specific requirements: having a project with certain commercial appeal, advancing diversity and inclusion either through the team or the game itself, and accessibility.


From fantasy mods to houses of ancient Roman gods

1700 hours. While working his day job, Pearce committed about 11 hours a week to his Skyrim mod, The Forgotten City, the first mod to win a Writer's Guild award. Pearce gritted his teeth and learned how to code along the way, solo. At first, he toyed with creating an ancient city, then he figured to add something unusual: time travel.

To his knowledge, no one had crafted time travel or a resetting timeline before in the scripting tools he was using.

"I'd say of those 1700 hours, I spent about half of those banging my head against the wall, just trying to solve those issues on my own," Pearce said. "And I had the idea to implement this time loop, since in the story the city gets destroyed, so that's how the idea was born." 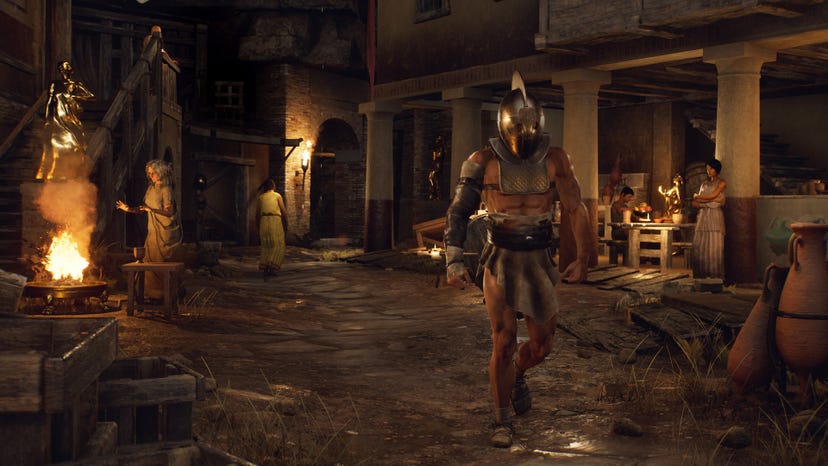 In The Forgotten City, our protagonist wakes up by the river Tibet in modern times. But when encountering some ancient ruins, he finds himself transported back to when inhabitants of ancient Rome -- gladiators, senators, priestesses, merchants, and immigrants -- walked the city. They quickly learn that the city's demise is brought about by breaking the Golden Rule -- if even one person commits a sin, everyone else turns into golden statues and effectively dies.

It's up to the main character (who can adopt of one a few "personas" including a mercenary with a loaded gun, or a knowledgeable historian) to figure out who breaks the Golden Rule at the end of the day and prevent it, and keep using the time loop to learn about the inhabitants and help them along the way.

"The time loop essentially created a lot of player agency, because they have as many chances as they need to figure out what went wrong. There can also be lots of different endings because the player can influence the day in such a way that the outcome changes," Pearce said.

Due to a variety of legal and logistical reasons, the story and the setting had to drastically shift from its mod origins. Going from fantasy and settling on Ancient Rome instead allowed Pearce to take advantage of real-life sources, with references to politics, philosophy, real locations, habits, foods, and even Roman-style toilets and baths. A history aficionado himself, Pearce aimed for accuracy by consulting with published author Philip Matyszak, who authored multiple titles on the lives of ancient Romans and Greeks.

One of the first soldiers the player meets explains the practice of decimation, a brutal military custom where, for instance in a squad of ten soldiers, one of them at random would face execution for the crimes of another. Thematically aligned with the Golden Rule, the player can from then on ask every single person they encounter what they think of this law imposed upon them

"The story seemed to fit really naturally in the framework of ancient Roman history," Pearce explained. "I can talk about stoic philosophy, engage in Socratic dialogue, talk about gods and civilizations, different religions. Having those to refer to helps enrich the story, make it feel more grounded and meaningful. For me, that's the biggest advantage when switching to making a standalone game."

When it comes to structuring the narrative of The Forgotten City, Pearce worked with several strategies in mind to best incorporate the over 60,000 lines of branching dialogue found in the game's script.

"At a technical or backend perspective, we've essentially set up two things: one, we're making sure the player is motivated to learn everything they can about each character, and in hand with that is that we are presenting interesting and colorful character portraits for the player," Pearce explained. "These need to work together."

Though the actual mechanics of dialogue are pretty familiar to most players, it's fairly reactive and expressive. Whenever someone shares their hardships, such as indentured servitude or a loss of a loved one, players have the option to say "I'm sorry to hear that". The phrase alone doesn't have a particular impact, but enhances player immersion. 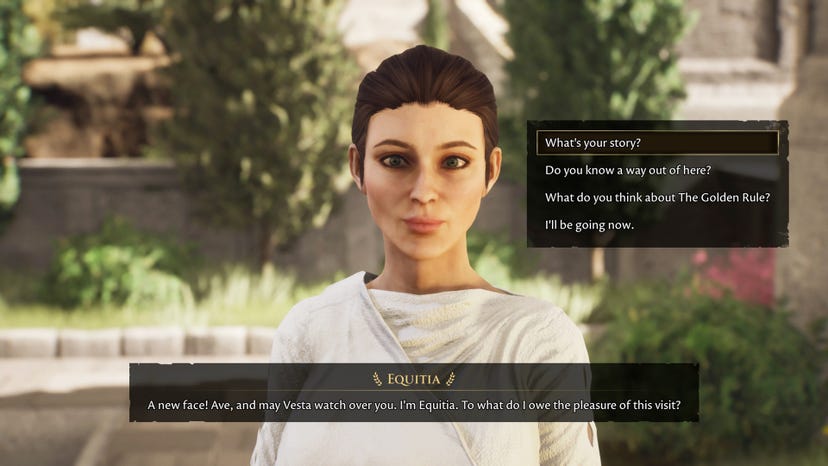 It's also often possible to shortcut through NPC dialogue and tell them to only give you a gist of their story or some legend, or to listen to their whole speech.

"We track hundreds of variables of what the player has done and collected. It's a gigantic puzzle that took a long time. One of the reasons why it's so complex is because the player is looping so often. Characters will forget about the player, but the player remembers them," Pearce said. "We have to give the player shortcuts through dialogue so they don't feel irritated."

Other than shortcuts through dialogue, the studio creatively approached the problem to avoid getting too close to the Sisyphean labors. Galerious, a friendly face that the player encounters first, is always at the beginning; platers may delegate quests that they have already completed in previous loops. It's satisfying to send him off on a series of tasks, watch him run around town, save a patient by grabbing the correct medicine, solve a conflict, and so on. Galerious also lets the player know that he doesn't mind doing this at all, and that it is all right to tell him that "we are busy and don't wish to speak".

Looping also gives the player an enjoyable sense of power; clever players can exploit it to get rich fast (not that gold is particularly useful) by stealing gold from wealthy inhabitants (which will trigger the destruction of the city), racing to other chests, then escaping. Gold is kept, even after a reset so holding on to items becomes key to solving other issues as well.

"That's the sort of feeling I want to give them in most, if not all, quests. This feeling of being clever or powerful," Pearce said.

Time trickery aside, the centerpiece of the narrative is interpreting and discussing the Golden Rule and morality as a modern person with ancient people.

"The goal is to create a lot of uncertainty about what breaks the Golden Rule. I could have written it where it's very black and white, but that's not reality, that's not an accurate reflection of the real world. Acknowledging that ambiguity and not holding the player's hand while they're exploring the city is encouraging them to grapple with what is right and wrong."

Pearce shared some tips regarding his writing and design philosophy. In a game heavily focused on dialogue, keeping the ratio between NPC and player speech relative is important. He stresses that more or less for every three lines of dialogue, there should be an interactive response to keep the player engaged, preferably with more than one option. As mentioned above, even if there's an option to say "I'm sorry to hear that" instead of just nodding along adds to the immersion.

All this goes hand in hand with the nuanced and diverse characters that populate this corner of the expansive Roman Empire. For instance, one quest sees players helping a physician to cure her patient, while others see them intervening to prevent a man from being harassed due to his sexuality or gathering the necessary information to pressure a duplicitous politician into a sudden, mid-election cycle career change. 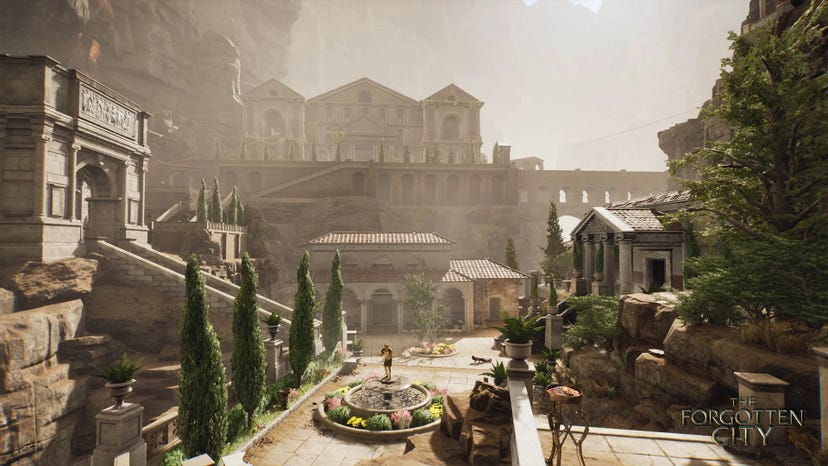 "Juxtaposing flaws and virtues, giving characters bits of light and shade is a way to make them much more interesting and endearing," he said.

On a deeper, narrative level, Pearce said that while the main narrative is ongoing, it sometimes pays off to build a secondary narrative in the background, which will eventually surface later in a revealing twist.

"World building is also huge here. I tried really hard to make the city into a livable, believable space. I started with questions like 'how do people live here?' which leads to a series of questions. What do people eat, drink? Water? Where do they get the water? All right, we've got aqueducts to bring water from outside the city. Also they'll drink wine and beer from the tavern."

The player can pick up and read about the bread that's freely distributed by the bakery, and the city itself is complete with a small farmland, slums, and estates that differentiate between the stratified classes inhabiting Ancient Rome. Really, the true testament to the game's dialogue flexibility is the ability to talk about memes with an ancient Roman priestess.