Deep Dive: An Economy of Discovery - Behind the movement of Airborne Kingdom

In Airborne Kingdom, players grow a unique city among the clouds and fly it across a wide-open landscape. From its early inception, the game was always about building aspirational sky castles; but allowing the player direct control over the movement of their town was a wrinkle only discovered through iteration. That one mechanic helped us spawn a unique twist to a popular genre, and entirely shifted design roles in our company.

After years at various AAA houses, I left Visceral Games in 2015 to “go indie” (solo-developing a narrative adventure, A Case of Distrust). Then in 2017, Visceral closed -- so a few old colleagues and I founded the studio The Wandering Band. We had all worked on hit franchises (Dragon Age, Star Wars, Battlefield, etc) and had almost half a century of combined industry experience -- but our debut game, Airborne Kingdom, would be the first time any of us felt complete creative control over something big, with enough skill and resources to pull it off.

From the beginning, we loved the idea of creating a city-builder in the sky. The systemic nature of the genre was intriguing, and the creative potential of a kingdom-among-clouds was equally tantalizing. Yet our first prototype of this concept felt underwhelming -- a village suspended above a ground plane had little to set it apart from genre staples. We tried a number of mechanics to find our own slant, but it wasn’t until we added right-click-to-move (first described by our programmer Fred Gareau as “movement like an RPG”) that we could fully see the potential of what we’d created. With no anchoring to the ground, a player could simply click on a spot in the world, and their entire city would fly above that location.

This mechanic integrated elegantly with the rest of our game. With resource collection, instead of sending workers further and further away, the city itself moved closer to them. If players wanted to find new technologies to construct, they’d have to search for interest points on the ground -- an in-world research tree. And the larger the city became, the more force it needed to move, adding another element of infrastructure, Propulsion, for players to stay on top of. The natural connection between verbs was surprising from the get-go, even for us. Though the movement system required a lot more work on the world itself. 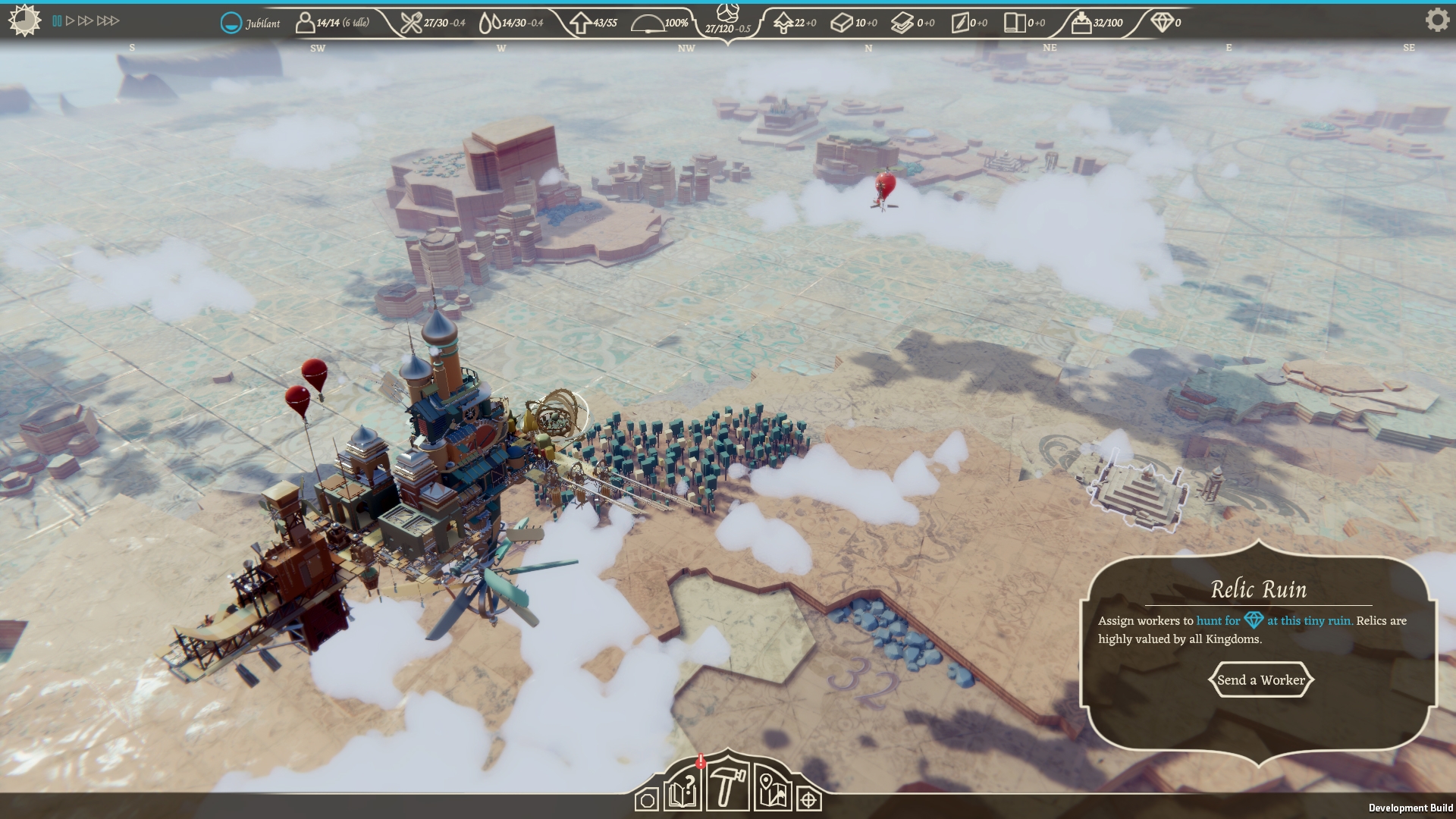 Our original instinct was to create large pockets of resources separated by vast swaths of uninhabited lands. But the real flow-state emerged in a rhythmic repetition of small tasks. Players would target a far off location to fly towards, and as their city moved, they would rotate the camera in search of nearby resources and assign workers to them. When the kingdom moved away, players would search for closer pockets and re-assign their gatherers for greater efficiency. This created a constant problem of low-level asset optimization, which added a mini-loop to our game, and felt like a comforting tempo to our players.

To magnify that feeling, no single area could provide all resources for the player indefinitely. Finding a large stash of one particular resource could be a peak of interest, but to lock our players into a flow, they’d have to move on fairly quickly. We subdivided the world into tiles and charted exact values of resources in each area, mindful of keeping all locations different but ultimately balanced. We carefully tuned a maximum distance between kingdom and resource patch -- if resources were beyond that distance, workers would automatically un-assign themselves. We also kept resources in small clumps, using them more like trails for players to follow.

As we continued iterating, “exploration” became an ever more important pillar. If we let the players explore, we had to make a world worth exploring. Eventually this even changed our roles at the company. Zach Mumbach, originally our producer, shifted his focus to level design. His role was to capture that feeling of discovery -- encouraging the player to rummage through the nooks and crannies of our world and rewarding them with something special.

To the very end, we kept adding small trinkets for players to uncover -- settlements to recruit more citizens, ancient artifacts to build exceptional buildings, and even simple dye and metal ruins to customize their kingdoms more to their liking. We added biomes and a day/night system, asking players to search for twinkling lights in the dark, or through dense clouds between canyons. We also wrote more story in the game than we first expected, giving more personality to each point of interest. These small discoveries each worked to amplify that sense of exploration and the flow of searching for them. 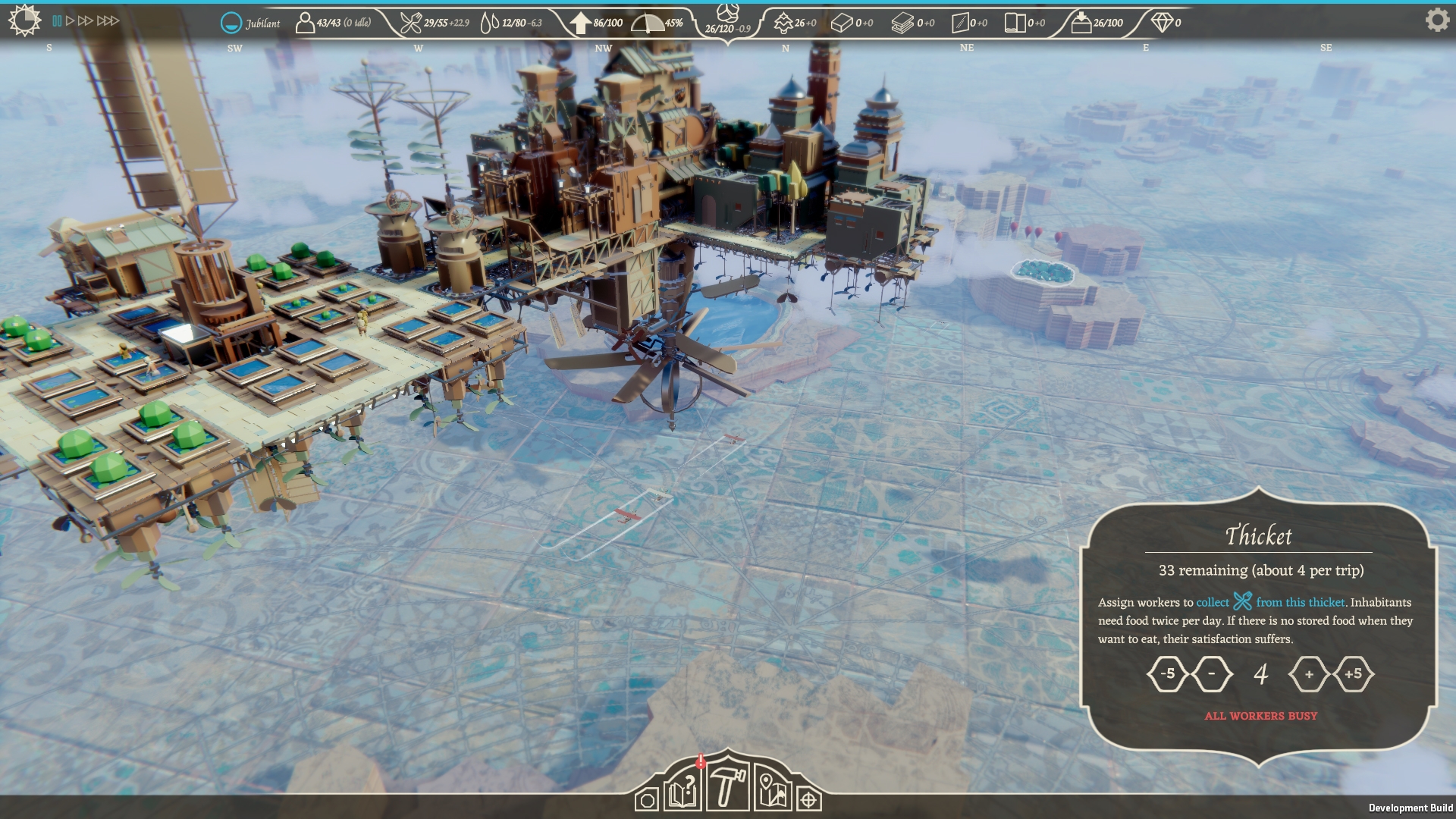 Essentially, the movement mechanic evolved our game from a pure city builder to something reaching towards RPG. At times, Zach and I were each designing a separate game -- I was still making the city builder with all the balance and economy that required, but he was making an open-world adventure. We used the metaphor of the entire kingdom as a character, with each new construction an upgrade to boost stats. Our story even changed to reflect this, with a main thread inspired much more by Zelda than Frostpunk.

Reflecting on the entire design as a whole, I would lean into the RPG angle even further. We originally had reservations of including a story, or adding personality to the world, or thinking about its history. In hindsight, those were some of our best decisions, allowing us to merge genres and excite players with something new. It won us praise from multiple sources, including a BAFTA nomination and an IGF honorable mention, and a fanbase that got sucked into our new world. As the first game from a brand new studio, I’m incredibly proud of the job we did.

I can’t wait to expand these ideas moving forward!