Designing non-linear mysteries worth solving in Song of Farca

Solving mysteries isn't easy when you're under house arrest. Here's how the developers of Song of Farca created a choice-driven mystery narrative and clever crime-solving tech for an adventure game about a stuck-at-home PI.
Joel Couture
Contributor
September 01, 2021

Song of Farca offers challenging mysteries for players to solve with a little detective work. That’s not terribly easy when your detective is stuck under house arrest, though. As such, players will need to use many online tools and hacking in order to reach out from their personal prison to solve the cases put before them.

Game Developer spoke with the founder of Wooden Monkeys, David Aramyan, to discuss how they created the tools players could use to solve a murder without stepping away from their computer, how they made the complex task of hacking more approachable to players, and why they made player choice such an important part of their game’s narrative.

What inspired the idea of solving a mystery from the confines of house arrest?

The concept for Song of Farca was an organic development of ideas that we'd been testing during our previous project. Even though the spirit of these two games is very different, we initially wanted Isabella Song (Song of Farca's protagonist) to be locked in a room and solve tasks remotely like Jeffrey Koch (Save Koch's protagonist). That's how the story of her house arrest came about.

The plot turned out to be a little prophetic: about half a year into development, not only was Izy locked at home, but so were all of us in the real world.

What thoughts went into designing Izy's devices and tools? In creating the means to solve the mystery from home?

When the idea of a "private detective under house arrest” finally formed, we tried to deconstruct the adventure game and detective genres to answer (first to ourselves) the question: what devices does Izy need to perform typical actions without getting up from her chair? How will she explore locations? How will she communicate with other characters? How will she handle the information she obtains? Despite the fact that we locked the protagonist at home, we didn't want to limit the possibilities available to players, but to actually give them more than other similar games. 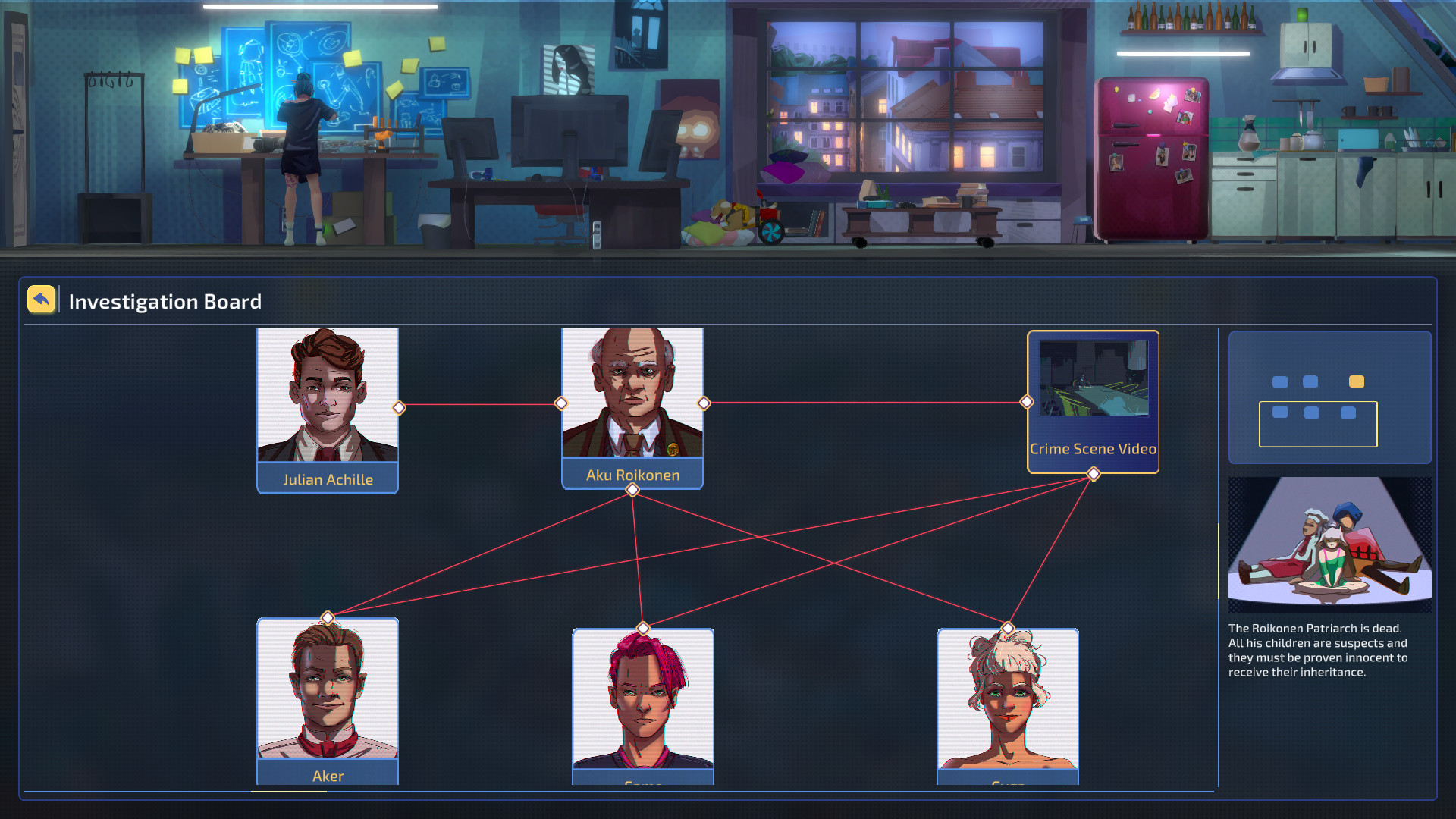 What ideas went into creating a mystery that you could solve from a computer screen? In developing a crime that one could solve without leaving their home?

It's difficult to say which ideas gave rise to one case or another. We deliberately chose the narrative format of American procedurals (one case = one episode) so as not to be constrained by situations or characters. There's a classic murder mystery, a search for a missing dog, a race against time to stop a maniac, and much more. The narrative pace gradually accelerates, the stakes grow higher with each new case, and in the end, everything reaches a logical conclusion.

Hacking is a terribly complex task. How did you design the hacking elements so they would be approachable for a non-tech-savvy audience?

In Song of Farca, the player takes on the role of a genius hacker and detective. Most of the player's interaction with the game world occurs through some kind of "hacker tricks". But while developing the mechanics of interacting with Izy's gadgets, we always kept in mind that everything should look as cool as a Mission: Impossible or Bourne film while still controlling as intuitively as possible.

Therefore, each interface element was prototyped, tested, and polished after collecting feedback.

Surveillance and our online presence feel like major themes of the game. What thoughts did you want to explore on these topics with your work?

Within the team, we often referred to the game's setting as “transitioning to cyberpunk”. We wanted to fantasize about a near future in which humanity hasn't mastered space travel or the secrets of eternal life, but has rushed headlong into a world dominated by technology and gadgets. A world where personal data can be obtained in two clicks and criminal groups can be destroyed using a device. Where digital bullying can easily push someone into crossing the line. Where all the powers of Big Brother are just another handy tool for experienced hackers. 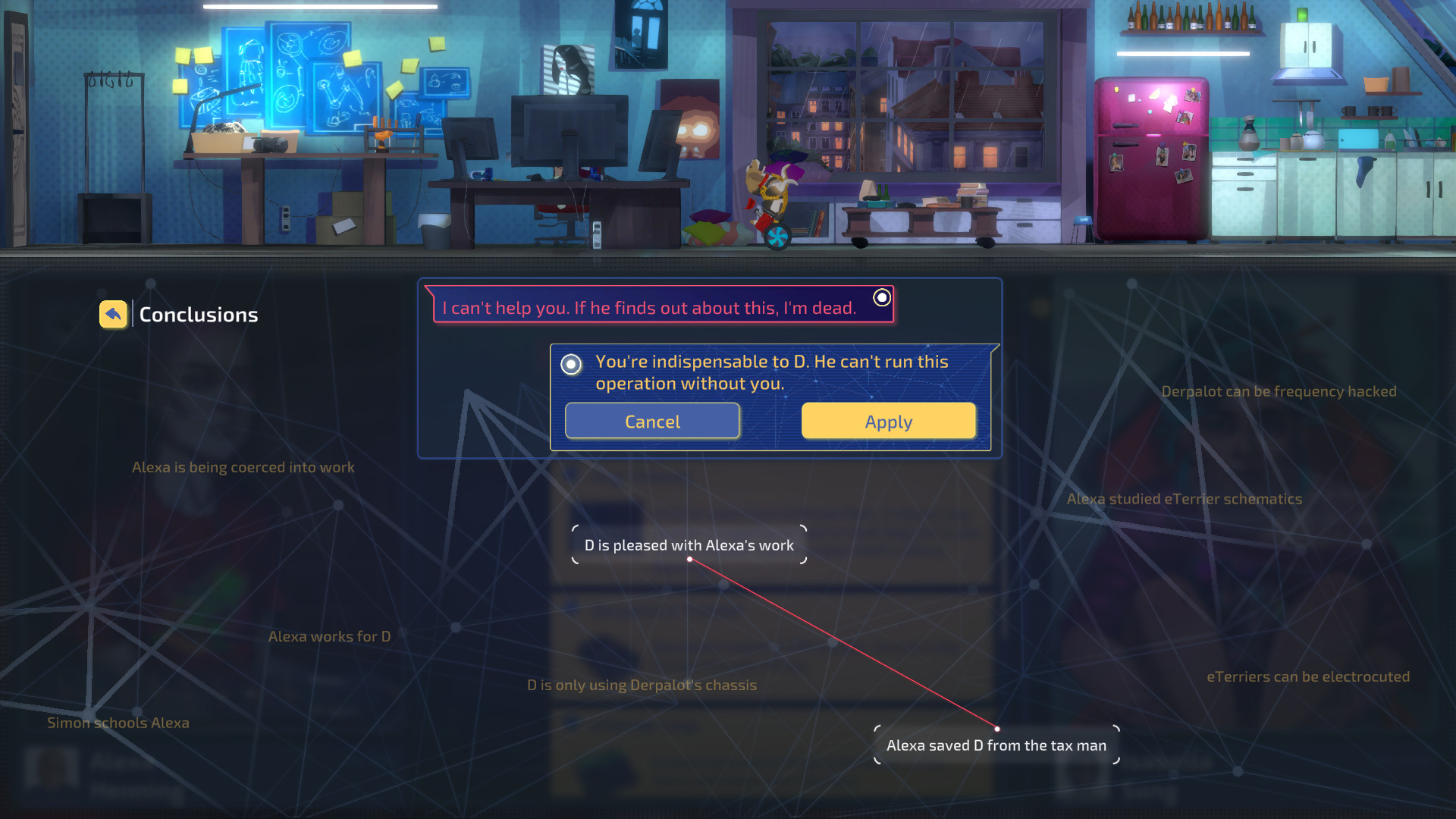 What challenges do you face in creating a mystery narrative? In figuring out how to lay out clues so that it draws the player along without giving too much away?

The main challenge was that none of us had ever worked on a detective story. In the beginning, we didn't know how to make riddles that kept the player's attention throughout the cases. The structure of the cases should be logical, but the player mustn't uncover the twists until the right moment. Therefore, each case went through several stages of development, testing, and polishing. At each stage, the cases were tested by every member of our team and the publisher's team.

Once the cases had more or less reached their final form, we gave them to the players. All feedback was important and we handled it very carefully internally. Judging by the players' feedback, this approach helped us make a good detective story :)

What interested you in having player choices matter throughout Song of Farca? What difficulties did that create for the game? What interesting opportunities did it create?

We like to create non-linear stories where the player can make decisions that leave a mark on the game's world, characters, and future history. This makes the story feel more personal. In Song of Farca, players can't fail a case, but the choices Izy makes during a case have important implications for the storyline. Do you convict the character all the evidence is pointing to, or dig deeper? What collateral damage will you leave behind you? The characters in the game follow real-world laws, so consequences aren't always immediate and there certainly aren't any pop-ups with hints like "Clementine will remember this." If Izy decides to do things the easy way by (for example) blackmailing someone with information she's found, that character probably won't be happy to talk to her again later.

The main problem with this storytelling approach is the amount of content you have to create in order to maintain these variations. Most players won't even notice them. For a small team with tight deadlines, that's not an easy task. Therefore, we tried to strike a balance between branches that really affect the plot and those that influence roleplaying.

At the same time, variability encourages some players to spend more time playing the game. We like to watch how the Song of Farca community discusses certain story moments (or analyzes achievements they haven't unlocked yet) and realizes where they could have acted differently and taken the story in a different direction, or how they could have saved a character if they'd been a little more attentive. 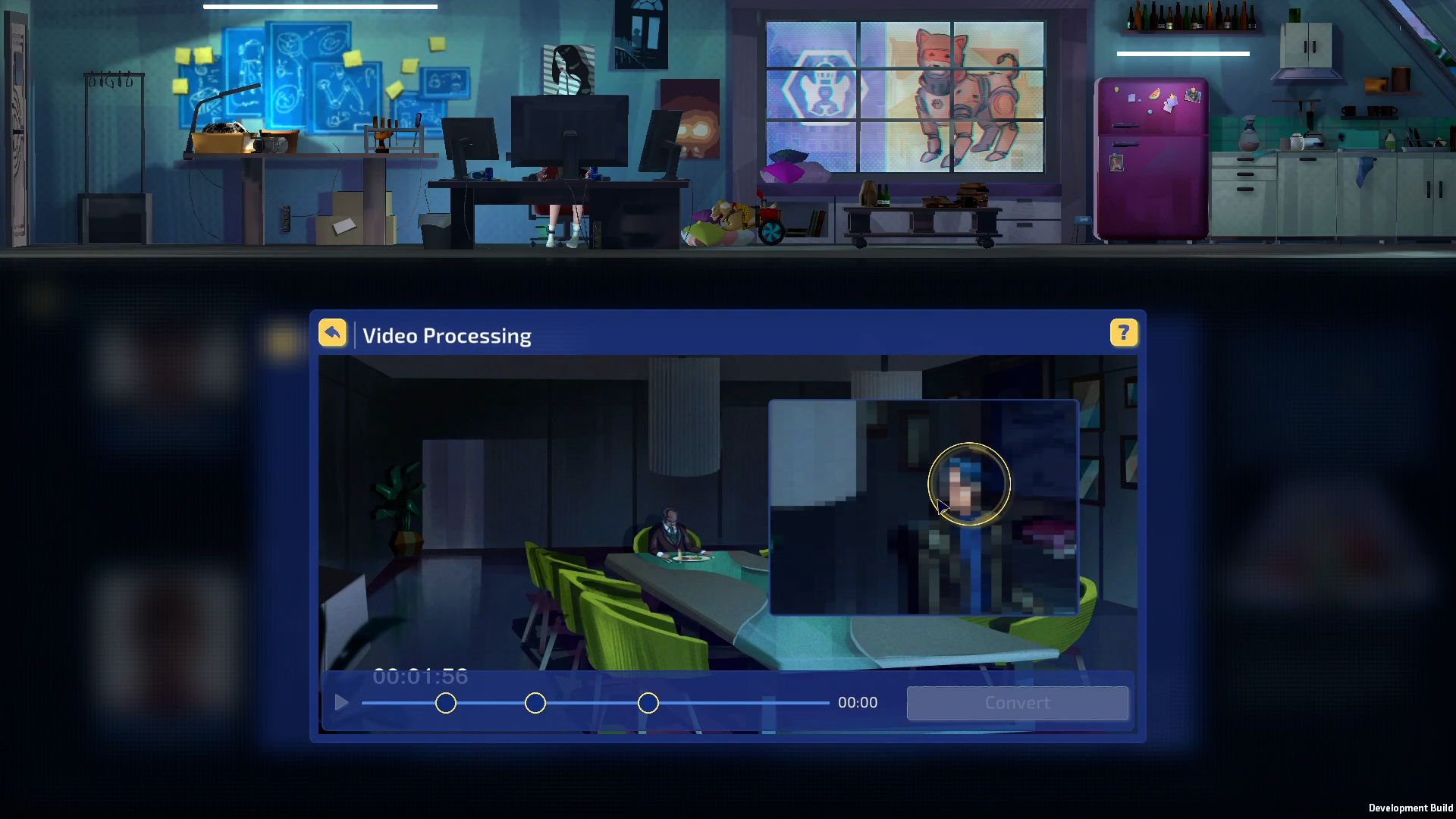 These “limitations” allowed us to enhance players' immersion in the atmosphere of the game's world and to give them a unique experience. This makes the story we're telling even more vivid.

But at the same time, these "limitations" presented some unexpected challenges. For example, for a long time we couldn't decide on how exactly Izy and Jessie's first date would happen. Those who have played the game already know that it plays a very important role in the story. After a lot of searching, we came up with the idea of a “remote dinner”, which we were very pleased with.