"The destruction came first, and the setting was more or less retrofitted to suit the technology. It was important to me that destruction would be used for actual gameplay and not just as an effect."
Chris Kerr
News Editor
July 21, 2021

Teardown takes the player to a fully-destructible voxel world, tasking them with carrying out heists as quickly and efficiently as possible. What's the best route to what you need when you can crash trucks through walls, blow holes in ceilings, and smash your way to your prize?

Dennis Gustafsson of Tuxedo Labs spoke with Gamasutra about how this heist game was born out of an experiment in creating a destructible voxel world, that challenges that come when players are allowed to break everything, and the wild things that have come from the modding community around the title.

Who are you, and what was your role in developing Teardown?

I'm Dennis Gustafsson, and I came up with the original concept for Teardown. I also developed all the core technology that goes into the game.

I've had a life-long interest in game development and been programming for almost thirty years. I have worked professionally with game development for the last twenty years. At first, I worked mostly on the tools and middleware side of it, later moving over to contract work and then co-founded mobile game studio Mediocre in 2010, releasing games such as Smash Hit, PinOut, and the Sprinkle series. Game physics has always been my primary interest, so it's no coincidence most of the games I have been involved in feature physics and destruction. I'm fairly new to voxel technology as I started to experiment with it about three years ago. 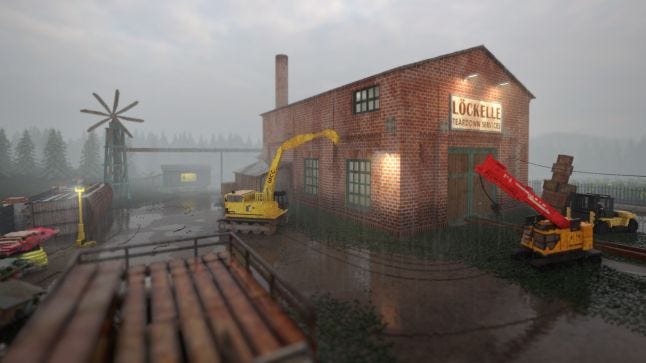 How did you come up with the concept for Teardown?

It started as a technology experiment with a fully destructible voxel world. I worked with Emil Bengtsson for six months, trying to come up with a concept, but designing a game that actually works in a fully destructible environment was a lot harder than we anticipated. We prototyped several different ideas, but none of them really worked since the player was given too much freedom with the fully destructible environment. We eventually gave up and I continued alone for another six months before coming up with the design for Teardown, so it was a rather long process. Emil later joined the project again and has been doing a lot of the level and mission design.

There is also more notes on its design on the Tuxedo Labs blog.

The engine and tool pipeline are created from scratch in C++ for this game specifically, which is rather unusual today, but since the game relies on novel technology I don't think it would have been possible using an off-the-shelf engine. For voxel modeling, we use the free tool MagicaVoxel.

What appealed to you about making a heist game where everything is destructible?

The destruction came first, and the setting was more or less retrofitted to suit the technology. It was important to me that destruction would be used for actual gameplay and not just as an effect. Creating efficient shortcuts was a way to make creative use of destruction without relying on resource limitations (more on that further down). The heist setting was born already in the early prototypes I did with Emil, and I think it serves as a good foundation for varied missions and creative use of destruction. 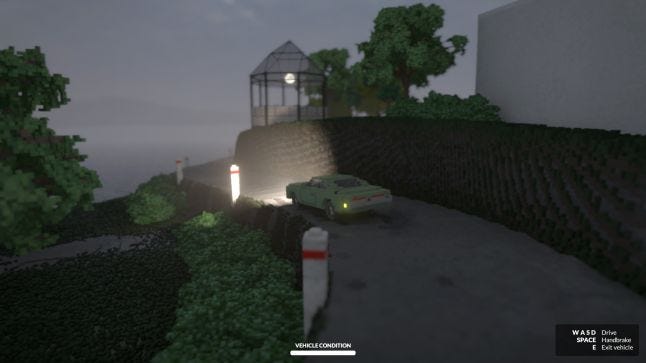 What thoughts go into making interesting locations/levels for players to work through? Into giving them missions that will require they be creative with the environments?

Since everything is destructible, the only real obstacles we have to work with are elevation, water, and distance, so it's quite different from traditional level design. There is also a technical limitation on level size, so all levels have to be rather small, but since players need to learn every corner of a level in order to master the different missions, I don't think they would have been much bigger even if it was technically possible. In its current state, the game relies a lot on creating efficient shortcuts to clear a number of targets against a timer, but we're expanding that quite a bit in the second part of the game that we're working on now to get more variety into the gameplay. There are no NPCs in the game, so most environments had to be either industrial or commercial to make it more believable that there is no one around.

How did you decide on the tools/vehicles players could use? How did they add to the creative experience you wanted to make?

This is an area I wish we thought through a bit more before release. Some of the tools were just left in as legacy from previous prototypes (like the shotgun and rocket launcher, which do not really fit the game setting very well), while others were developed specifically for this game (like the spraycan and fire extinguisher). I personally think the planks turned out really well since they are so versatile and can serve as makeshift bridges, dragging objects with vehicles, building rafts, etc. It's been really fun to see the modding community go wild with new tools, adding things we never thought about ourselves..

What challenges did you face in creating a world where everything was destructible?

The main problem with destructible environments is that it gives the player too much freedom. A lot of common game design builds on restricting access to certain parts of the level, but this all breaks down when everything is destructible. The only way around it is to introduce restrictive resource limitations, but that, on the other hand, makes the game less fun, so you end up having to choose between fun and challenge.

The core gameplay of Teardown works around this dichotomy by making the entire map accessible at all times and have the challenge be about finding efficient shortcuts instead. By splitting the gameplay into two phases - a relaxed sandbox phase for planning and preparation and an action-packed execution phase, you can get really creative with destruction at your own pace while still posing a challenge that is not entirely bound to resource limitations. 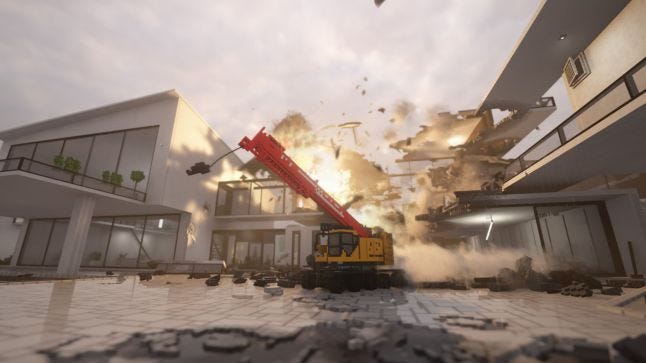 What compelled you to put modding support and level editors into the game? What do you feel that added to the experience?

Mod support is something we planned from early on, since it was one of the most requested features even before the game was released. What we didn't expect was that the modding community would grow so fast. The initial release didn't really have any official mod support, but people started figuring out ways on their own, so we put a priority on proper mod support immediately after release. We're quite happy with the current state of mod support as it now exposes everything we use internally. We actually started using it a lot ourselves when trying out new ideas and concepts. Since Teardown, at its core, is a linear single player campaign, the mod support gives the game a substantial longevity boost, both for people playing mods and for those making them.

Can you tell us some of the clever solutions/creations players have made with the game that have surprised you so far? That you've enjoyed seeing?

We didn't expect so many custom tools from the modding community, but it's really fun to see all the creativity on that front! I also think it was really cool to see 3D scans of real life locations in Teardown. This is something we never thought about or cared to try ourselves. There is also a multiplayer initiative that I follow closely. What excites me the most though is when people make new gameplay that uses the destruction in clever ways. There are a few examples already, but I expect more to come as the modding community matures.