"A Sega CD version of the game seems to have been planned from the very beginning. Unfortunately, although the design document has many Sega CD callouts, they generally don’t seem to have survived to the source art in our Aladdin archive here."

- Game developer Rich Whitehouse, writing on The Video Game History Foundation's blog about what he discovered in the source code of Aladdin for the Sega Genesis.

The Video Game History Foundation has published the first product of the Writing Fund it opened this summer: a deep dive into source code for the Sega Genesis game Aladdin, written by game developer Rich Whitehouse.

The game itself is often recognized as a high point for what games could look like on the Genesis, and Whitehouse's efforts to pull it apart (using the Noesis tool) and look at the insides (excerpts below) sheds light on what game development was like in the '90s.

It also showcases a bunch of assets that were cut from the final game (like a bunch of weird enemies and an entire bonus stage), since Whitehouse discovered the code he was working with (archived by the Foundation) included a significant amount of source art.

He also found what seems to be an early design document for the game which outlines, among other things, a rock, paper, scissors mini-game (a la Alex Kidd) that never appeared and a Sega CD version that never happened.

"Aladdin in Prince Ali form was planned to appear in numerous additional Sega CD levels," Whitehouse writes. "The design doc calls out that Aladdin would only appear as Prince Ali in one level of the cartridge version, and is intentionally omitted to save ROM space."

There's a lot more fun trivia in the full post, which you can (and should) read over on the VGHF website. 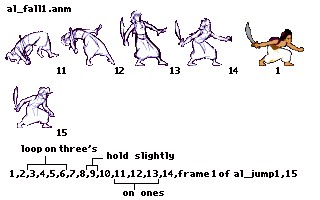