The members of Little Inferno and Human Resources Machine dev Tomorrow Corporation helped define the indie movement of the mid-2000s. We pick their brains and see what they're up to today.
Simon Carless
Blogger
December 12, 2018

Right at the start of the indie revolution of the mid-2000s there was Tower of Goo and the Experimental Gameplay Project.

Since then, the closely-intertwined indie studios 2D Boy and Tomorrow Corporation have made a number of high-quality, entertaining games: World of Goo, Little Inferno, Human Resource Machine, 7 Billion Humans and the upcoming Welcome to the Information Superhighway (provisional title).

In this interview, Kyle Gabler, co-founder of 2D Boy and one of three cofounders of Tomorrow Corporation, talked with us about his studio's work past and present, giving us an inside look at one of the studios that helped define what "indie" means in video game development. (With cameos from co-founder Kyle Gray & intern 'Apocalyptic Dan'.)

Kyle Gabler: It was a different time back then! If you turn on your modem and log back into 2005, almost no one was using Gmail, almost no one was using social media, Britney Spears was the greatest artist of our generation, and smartphones were two years away for most people. And we were students - all three of us here at Tomorrow Corporation met at the Entertainment Technology Center at Carnegie Mellon, and we've been making "indie games" in some form or another ever since.

"Indie games" in quotes, because that wasn't really a word we knew back then. We would have described our games as "casual games" or "experimental games". Never one of the cool kids, it took us a while to realize an indie scene was brewing, about to explode, and something we could be a part of.

The indie movement, then and now

Kyle Gabler: I'd be happy if the "indie movement" is remembered at all in the future! It's starting to feel like the pendulum has swung back towards publishers and stores and even streamers having all the power, with little developers getting left out. Our intern Apocalyptic Dan (Dandy Wheeler's brother) wants to explain more...

Apocalyptic Dan (Tomorrow Corporation intern): We're doomed! Back in 2008, something like 7 games launched all year. And now it's like 7,000 games launch every day. Your special game you worked really hard on has minimal value. Small game devs are now just little workers shoveling "content" into hungry stores that promote themselves (and not you) with heavy discounts, subscription services (you get 4 cents every time someone plays your game for 10 hours), and ravenous youtube/twitch streams with people scream-talking over that game you stressed out for years building from scratch.

"I'd be happy if the 'indie movement' is remembered at all in the future! It's starting to feel like the pendulum has swung back towards publishers and stores and even streamers having all the power, with little developers getting left out."

We here are Tomorrow Corporation have been fortunate to continue doing well so far, and we like to think we have good relationships with stores and streamers, but it's like those flashback scenes in Handmaid's Tale - it's easy to see the trend, you can see strangers getting dragged away, and you're like "haha they shoulda seen it coming!", but it's only a matter of time until they come for you too. Anyway, the pendulum will swing back again at some point, but we don't know when or how. We might need a revolution - a whole new dang indie movement.

In the meantime, devs, if someone comes to you and says "Hey it's like Netflix for games! Wanna put your great game on it?" Say "No. My game has value. And I have self respect."

The difference between 2D Boy and Tomorrow Corporation

2D Boy has certainly chilled out in recent years while we're both occupied with other projects, but it might wake up again one day.  As for Tomorrow Corporation, we built our most recent game 7 Billion Humans with our friend and guest star Pete Angstadt. And we hope to work with even more new people and cameos for our next game.

Kyle Gabler: A character in Little Inferno notices the same thing! They say something like "you buy stuff, you burn it, and you get back more money than you spent on it. It doesn't make any sense, it's not even sustainable!" It was a fun game to build, with a loop that had to be intentionally silly, but also legitimately fun to play with. 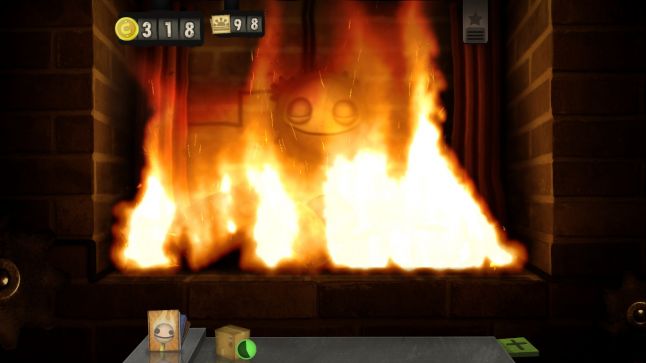 And it was absolutely a tough game to promote! The basic idea was something like, "hey someone should make a Yule log simulator, but you discover something terrible is going on behind the scenes, and it turns into a surprising and heartfelt game no one expected." So we built it (and hope we earned that last bit!), but it was hard to talk about with players and press, since we had to intentionally hide what the game was really about.

Next time we create a secret experiment, we might want to tip our hand a little more - like the marketing campaign for "The Crying Game" that urged in its marketing "This movie has big secrets! Nothing is what it seems!"

Anything can be a game, including programming

Kyle Gabler: That's definitely true, pretty much anything can be made into a game, even boring stuff! Tower/World of Goo came out of trying to find a fun way to use Hooke's Law, the spring equation you might remember from physics class.

"Pretty much anything can be made into a game, even boring stuff!"

Human Resource Machine and 7 Billion Humans are little computers made out of people in an office setting. Programming is just puzzle solving, and a natural fit for a puzzle game - the hard part for us was putting together the perfect sequence of puzzles to teach players from scratch everything they'd need to know. We hope players get that same thrill and those same illuminating aha-moments that programmers enjoy every day.

Kyle Gabler: [Y]our office in HRM is a pretty direct metaphor for a simple computer. You have a stream of inputs (your inbox), a stream of outputs (your outbox), a small amount of memory (tiles on the floor), and an accumulator (the one thing your worker can hold in their hands).

And you program it all with a simple assembly-like language of 11 total commands. Computers aren't magic, but the way you can combine small, simple, building blocks to create unlimited complexity almost feels like magic.

A brainy fellow named Alexandre Dumont actually built a real hardware CPU modeled on HRM, and you can read all about it on github and on Twitter.

Kyle Gabler: We're painfully aware that our players are smarter than us. Our small group of beta players destroyed our best known solutions at the time, in both HRM and 7BH. And almost every one of those solutions has been destroyed by other players since wide release. In both games, we set SIZE and SPEED challenges like "solve this puzzle using only five commands!" or "solve this puzzles so it completes in 12 seconds or faster.

We put a lot of work into setting these challenge values at "tough but fair" difficulty levels. For example, you will never be expected to unroll a loop* (a low effort but tedious approach to make programs faster) - there is always a cleverer more "elegant" (programmers love that word!) solution.

(*Since our players are sticklers for facts, I should acknowledge that the second level of HRM does require a very short two-command unroll to meet the speed challenge, but this is the only level!)

Kyle Gabler: Yeah, each of your workers in 7 Billion Humans is like a little thread or separate process in a parallel computer. So we looked at a lot of references, from self organizing little robots, to those sentient broom things in that Mickey Mouse Sorcerer's Apprentice Fantasia segment.

"One person was kind enough to describe our art style as 'draw like you're in 4th grade and put big eyes on it.'"

Solving puzzles using teamwork is so different, and not especially more challenging, since each individual worker's job is so much simpler. For example the very last, very challenging, level in HRM comes back early in 7BH, but using teamwork, it's possible to solve using only 6 total commands. (One player actually solved it using only 4.)

Kyle Gabler: Both HRM and 7BH let you copy your solution from the game and paste into notepad or wherever. We thought this would be helpful for players sending bug reports. But we didn't expect that some players (usually the extremely advanced career programmer players) would write all their solutions in notepad++, or visual studio, and then paste them back into the game. One of our super advanced players even made a syntax highlighting thing for Visual Studio. We still recommend most players use the in-game editor, though!

Kyle Gray (Tomorrow Corporation co-founder): Everything runs on our custom Tomorrow Engine. Allan (our programming brain) is a mad genius who reverse engineers NES games in his spare time.  We assume he’s been automating the whole thing since 2012.

One person was kind enough to describe our art style as "draw like you're in 4th grade and put big eyes on it". I think that's pretty accurate.

Kyle Gabler: Last I heard, the Sign Painter was hanging out on the beach with Sugar Plumps somewhere, probably with fabulous sunglasses and a great tan.

Every time we make a new game, a few stowaway characters from previous games come along too. I'm hoping we can visit some old friends again somewhere on the Information Superhighway! And if you want to know more about that, here's a trailer for our next game.