Captain Toad and the core of Nintendo game design

What makes Captain Toad special -- what sets it apart? And how does it fit into Nintendo's body of design work?
Christian Nutt
Blogger
December 12, 2014

Captain Toad is one of those games we should be thankful exists.

That may sound like hyperbole, but hear me out. I know, I know. It's tempting to be cynical. Nintendo needs more Wii U games, right? So here's a mini-game from Super Mario 3D World that's been expanded into a full retail release, and in just a year.

But should we dismiss it as a cheap, fast way to generate content, or should we be grateful that a mode from a bigger title has -- instead of being forgotten -- been given room to breathe, that the game developers have been offered an unexpected chance to fully plumb its depths?

The latter, quite obviously, I'd say. And to my surprise, the critics seem to agree.

In fact, the game is a further exploration of a particular Nintendo design ethos I want to talk about, and that's part of what makes it special.

Those Captain Toad levels in 3D World were a surprising highlight of the game. I played them all, very eagerly. When a new one unlocked, I was immediately on it. Somewhere along the way, all I could think was "man, I hope they make a full game out of these." I didn't expect it to happen. It did.

The result has broken the borders of the original concept in every way, too. If you have a Wii U, I'd urge you to pick it up.

Captain Toad is a fantastic pass-and-play title for couples (or friends.) Somehow, unexpectedly, the best thing about the GamePad seems to be how it travels around the room, from player to player -- whether in Nintendo Land, NES Remix, or now Captain Toad. My husband and I just handed the controller back and forth -- sometimes I'd give it to him if I failed a level too many times, or just because "this one looks like your kind of level, so why don't you do it?"

And then there's this. I can't attest to it, but I'd trust the source:

@ferricide in my case, it was like playing a cartoon that mesmerized my kids. they loved every minute of Captain Toad.

The game's setup is simple. Take a look at this level: 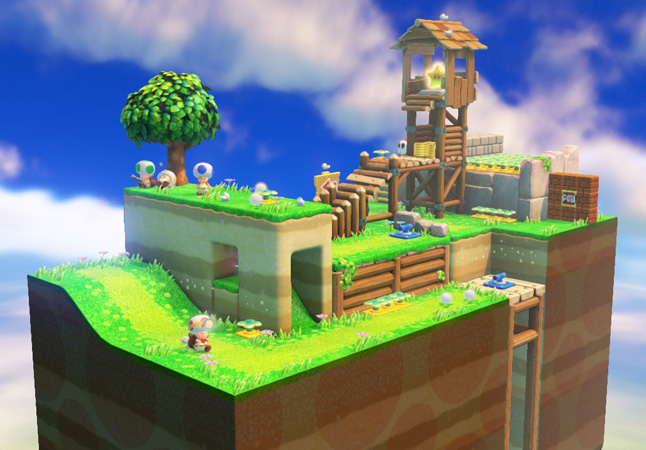 You can easily see what the goal is by just looking at it. You want that star. The trick is getting to it.

Each level also has three optional hidden gems. So it's up to you to figure out how to get from Point A to Point B (and hit X, Y, and Z, if you're so inclined, along the way.) The characters have limited mobility -- they can't jump -- but you can walk and run, and pick things up and throw them. Like the Mario games it split from, there are various gimmicks (such as moving platforms, keys, and switches) along the way. And enemies, of course.

Sometimes, the levels give you the feel of a Zelda puzzle. Other times, there are echoes of Mario design. My husband also insists that the game reminds him of Wii cult classic Zack & Wiki, which is a game I really should have played by now.

More often than not, it's simply pure Captain Toad -- it's not quite like anything else. It sort of evokes the "action puzzler" genre which was so big a part of classic console and PC games (anything in the bag which loosely gathers both The Adventures of Lolo and Lemmings). It's a genre I liked a great deal at the time and one I often miss when I think about it.

In my mind, puzzles and action go together well, and I like the tighter focus older games had on pairing them. "Realism" didn't exist in those days -- pacing and physical space were based only on what the game required. These games lived and died on game design alone. Even more so than 3D World, Captain Toad is defiantly unrealistic. 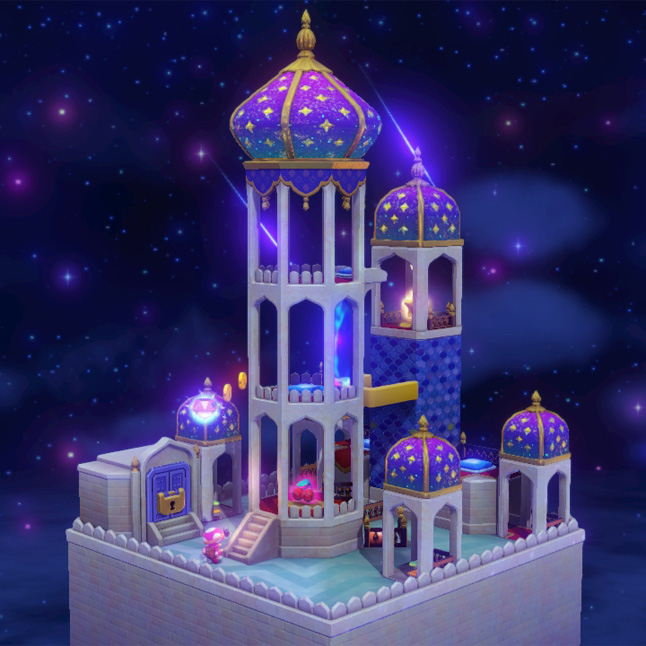 The game's levels have often been compared to dioramas; they're very toy-like, in fact. Captain Toad is a universe of perfect mini-worlds -- terrarium challenges, puzzle playsets. Their cheerful plasticky gimmickry puts me in mind of Milton Bradley's T.H.I.N.G.S., a series of toys which I much enjoyed as a child.

At times, I just want to put my hands into the game's levels (and using the GamePad's touch screen, you kindasorta can, sometimes.) Even for adults, there's a certain toy-like joy in the game; video games are toys we, who have grown to crave goals and resolution and abandoned unstructured play, can still enjoy.

What matters in this game is the puzzles, and the structure of the puzzles.

"A doozy that throws them for a loop"

Sometimes you can see the characteristic Nintendo focus on kishoutenketsu clearly. I really like kishoutenketsu game design, I've come to realize, once Koichi Hayashida (who directed both 3D World and Captain Toad) clued me into it; it's a lot of what makes Mario courses so satisfying to play, and the same applies to Captain Toad.

Kishoutenketsu is a traditional Asian narrative structure that is used for everything from poetry to film, and famously 4-koma manga -- the Japanese comic strip. This essay does a good job of illustrating the difference between kishoutenketsu and the Western three-act structure.

Of course, Shigeru Miyamoto has spoken about how drawing 4-koma manga was a schoolboy hobby of his -- most recently in this very good interview. In his professional life, he adapted its structure to game design instead.

You can read Hayashida talking about kishoutenketsu here, which is what put me onto paying attention for the ethos in the company's games.

Here's the money quote from that interview (though you really should read the whole thing -- it's one of my favorites, ever.) "We provide that [gameplay] concept, let them develop their skills, and then the third step is something of a doozy that throws them for a loop, and makes them think of using it in a way they haven't really before. And this is something that ends up giving the player a kind of narrative structure that they can relate to within a single level about how they're using a game mechanic."

Once you start thinking about it, you can see it all over the Mario games; Captain Toad also offers examples of how it can work in games, given that it comes from the same design minds. Each level is a small journey. That "doozy" that you have to think about how to tackle? That's the hook of a good Mario course or a Captain Toad level.

In Nintendo's games, it can take the form of "you think you know the solution, but how about this?" or "you thought this mechanic worked in this way, but how are you going to surmount this challenge using it?" Think back to a Mario course you know well, and you can probably think of an example.

You can see it in this playthrough of Super Mario World's Donut Ghost House, which has two identical chambers, in an attempt to trick the player. The situation itself (a Ghost House) was entirely new art the time; once the player comes to grips with that idea, there's the twist.

To overly simplify things, kishoutenketsu is about recontextualizing the things you already know about a situation. Here's a really nice post on its use in narrative, with some song lyrics that clearly illustrate the principle. 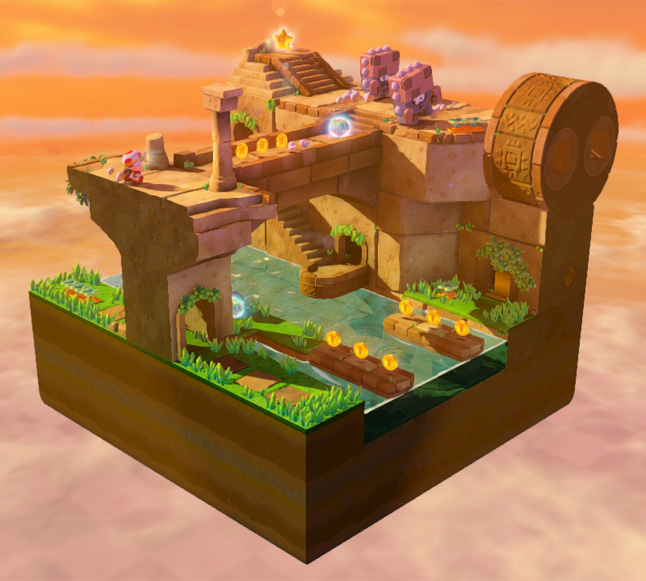 The big difference between 4-koma manga and American comic strips is that they aren't hung up on a punchline -- there's no zinger at the end. They can seem kind of gentle or even aimless to a Westerner, in fact. When applied to game design, though, which demands a concrete system for human interaction, the result seems to be levels that offer something akin to a friendly nudge or even a sarcastic smirk.

Captain Toad, then, is a playful friend, and a modest one, too. What's here I can best describe, as I put it on Twitter, as "hey, we want to make a fun, clever, unassuming game that will surprise you and you'll like it." It's that simple. The only way you can play this game and not crack a smile is if you've forgotten how to simply play and enjoy games.