Fictional languages, or conlangs have been a feature of many great works of worldbuilding. Canargy, a language I created for ChronoBlade serves as a how-to for creating an argot.
Stieg Hedlund
Blogger
August 08, 2016

I realized that my earlier post on Canargy told a bit about the why of its creation and presented the results, but for any who wanted to produce such a language, it was pretty short on details. So, if you've ever wanted to devise your own argot, read on!

First, for those who are still wondering why I thought a conlang was needed at all in ChronoBlade, I'd point to their history of adding depth and richness to worlds, particularly in SF and Fantasy, across media, from Syldavian to Dothraki to Al Bhed. Second, each of the heroes in ChronoBlade's multiverse came from a different reality: we started in Ragnarok, where Old Norse was spoken, and Thera's world of Minova used a mix of Minoan and Mycenaean Greek, while Uru'abgal, Lophi's place of origin, used Ancient Sumerian, so a distinctive idiom for Empyrea seemed in order in terms of maintaining parallelism if nothing else.

Returning to argots, they exist around the world and have for some time. Apart from the English Thieves’ Cant (which I’ll simply refer to as Cant going forward) I mentioned in Part 1, there are others: Rotwelsch, Germanesco, and Šatrovački, to name a few. They share some properties of pidgins, creoles, jargons, and slangs, but there are a few things that distinguish an argot from these.

The first is the argot's crypto-ludic function, or how the language disguises meanings; this is also done as a kind of linguistic game—many words are jokes or puns. Another, more important function has been described as connivance, but drives at group belongingness and exclusion of others. A third distinguishing feature of argots is their changeability: essentially, as one of these languages' words become absorbed into the mainstream language, they must continually be replaced or the argot loses its connivance function, and so ultimately its usefulness.

Because of the unique character of argots, philologists, linguists, writers, and many others have been very interested in understanding and documenting them for some time: Cervantes includes words and phrases of Germanesco in his short story, Rinconete y Cortadillo,* around the turn of the 17th century, and Hugo researched the French argot of his time extensively for Les Misérables.**

Linguistically, an argot is a variant of a language, somewhat like a dialect, where syntax remains intact but vocabulary is transformed. Words in an argot tend to take on the phonology and later, orthography (which in turn can further alter phonology) of the parent language. They are voracious borrowers from other languages (clearly a good way to disguise meaning), and use words of the parent tongue as well, but in unusual senses. An example of the former in Cant would be:

Initial k- feels slightly foreign to English, so it is replaced by c- (likely unless it precedes a front vowel, when it would tend to be softened). Obviously š is also strange, but the phonetic value ʃ is common, and typically rendered in our language as sh. The last syllable is simply elided.

An example of the latter would be:

The transformation of these already-English words is only in meaning. This is obviously an extended joke: a chicken is a cackler, and what is produced from the nether regions is a fart.†

Examples of words in standard, modern English that are generally agreed to have derived from Cant include (with their Cant meanings noted here remaining more or less intact):

Words like angler, bamboozle, booze, bunco (as in “bunco-squad”) , cute, gibberish, goon, jockey, lift (in the sense of “steal”), musty, neat (in the context of booze), qualm, slang, sot, swank, swashbuckler, swig, swill, tipple, underhanded, urchin (as a child rather than a hedgehog), and whippet, whose etymologies are either missing or conjectural are ones I’d venture also derive from Cant based on my own research, and I’m sure there are many more of which I’m unaware.

As noted previously, syntax is also provided by the parent language, as can be seen in a few examples:


Flick me some panam and caffan.‡

The last comes from Martin Scorsese’s Gangs of New York, which interestingly, contains a great deal of Cant. Frenchified refers to the “French disease”, syphilis, and is timely as 19th century Cant, however mort (woman) initially struck me as suspicious as it is already present in the Cant of the 16th century, and as I've noted above, argots are defined by their changeability. However, just prior to the movie's setting, in 1811, Francis Grose’s Dictionary of the Vulgar Tongue was published and became a huge success, particularly in the US, explaining why a relatively common argot word would still be in use some 200 years later.§

Moving on to the production of a fictitious argot, you basically decide what the influences are. Burgess’ Nadsat uses a combination of Cockney rhyming slang and Russian, with some minor influences from other, mainly European, languages as well. These made sense to the fiction he was creating. In Part 1, I also detailed my reasoning for choosing the influencers of Canargy; Victorian Era Cant and Fɔngbe.

In order to find the direction of phonological and orthographic change, the best source is English words derived from Fɔngbe. Unfortunately there are relatively few:

However even these start to give us clues: Dahomey comes from dã home, so we can glean two properties from this word alone: there is a compounding of two words into one and an orthographic normalization of the final -e—always in danger of being interpreted as silent—into -ey. Voodoo, deriving from vodun, shows the characteristic of vowel agreement, as well as normalization of a long u sound into oo. So this is actually a pretty good start, and fortunately, we can simply cast a wider net, looking at English terms deriving from the whole linguistic group Fɔngbe belongs to get more complete information. We find that our word yam derives from the Fula nyami, which lets us know what to with the problematic consonant cluster ny as well showing the elision of final -i‎. And chimpanzee, coming from Bantu ci-mpenzi points to c (with the phonetic value tʃ) changing to ch, and a different possible movement of final -i, to -ee.

Furthermore, you can simply invent changes that seem sensible to you. Burgess seems to have done a lot of this for the Russian words he added to Nadsat, e.g.:

Continuing this process, eventually a picture begins to emerge: 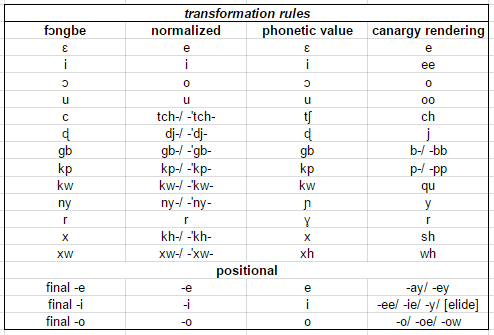 Some common words endings can also be handy—you can take English words and append them with these to alter their meanings and give them an unfamiliar look. Take these two agentive suffixes:

They can be applied very easily to a common English word like hat to get the pair:

Hatnon: one wearing a hat

However, you can’t just take the lexicon of a foreign language, normalize the orthography and pronunciation, use the parent language’s syntax and call it an argot. That’s more of a pidgin (although grammar would also have to be simplified). One of the important choices is which words you want to bring into your new language. For example, I toned down some of the emphasis on bodily functions for Canargy, as it seemed out of character to the cans compared to a lexicon of the Cant of a different era (~1600s) that I had compiled for a different project, for which I broke down the main taxa as:

Tools of the Trade & Descriptors thereof

At this point, it is time to read dictionaries. Take the words you like, or think you will need, apply the transformations you have created, discard words you don’t like, find new ones to replace them, etc. until you have a lexicon.

Next, do some trial runs: take passages, as I did in Part 1, and render them into your language. See how it feels, tinker with it, add words if you feel it lacks richness.

* Collected in his Novelas Ejemplares.
** He also included a proto-Tolkienesque appendix on argot in the book.
† In Canargy, I took this still further by applying the Cockney rhyming slang (another argot) for fart, raspberry (with raspberry tart being the rhyme), then applied the often-used short form razz, so egg = cackling-razz. There’s a bit of anachronism involved but I plead the crypto-ludic function of argot.
†† One can see that some of our modern uses are themselves extensions of the Cant meanings snack is a portion of a meal, a tip is money or information that is given.
‡ Cut me some bread and cheese.
‡‡ Observe the fellow, he is watching us.
§ Also note that the remark is addressed to Boss Tweed, an argot outsider, and so might be deliberately done in terms he would understand. In any case: props.  Asbury’s Gangs of New York, appears to also have captured Borges' imagination as he based a short work, Monk Eastman: Purveyor of Iniquities, on it.
§§ Meaning person
|| These last two (meaning respectively head and good) are essentially mishearings or even puns of the Russian words in English.