Rapid game development on a limited budget, 2 hours and $40 to be exact. Using Unity 4.6 and it's improved 2D workflow.
Mark Phillips
Blogger
December 16, 2014

In order to put the release into context it might be important for me to tell you a little bit about myself, I mean who doesn’t enjoy waxing lyrical about themselves? By day I run a fairly large IT team supporting retail, medical, distribution and manufacturing verticals. We look after the standard ICT stuff but have a core competency in development and design. By night I’ve been an indie game developer for about 2 years, I started out with Corona and launched the critically acclaimed (read, more than 100 downloads ;))  Duck Pond, a simple tap and destroy game aimed at kids under the age of 8. At that point I started playing with Unity, and as timing would have it Unity went free for Mobile at around the same time Corona pushed up their license fees.

A no brainer really, Unity as a stack is incredibly solid and while it lacked some of the finesse of the other 2D only engines it more than made up for it with it’s cross platform ability and world class 3D engine.

Fast forward to today, Unity has just released 4.6 with it’s all new GUI system and it has come leaps and bounds in terms of it’s 2D features and workflow. In fact I would argue that it is probably the go to platform for 2D game development today if you take into account the asset store, cross platform capabilities and of course the new GUI.

Right, so just how easy is it to build a simple twitch style 2D game in Unity 3D? Clearly quite easy if you can build one in under 2 hours?

The idea of the game came from looking at constraints in a 2D space, and what’s more constraining than being trapped in a rotating cube? The cube is a simple creation, it’s a sprite that I put together in photoshop (my art skills are limited to primitive shapes) surrounded by a couple of rectangular “box” colliders that act as bounds to stop whatever is inside the cube falling outside of the cube. 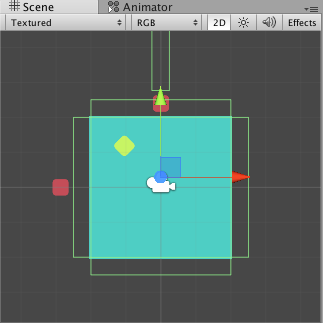 Next up I needed an antogonist, and what better than a little red/pink cube. It’s innocuous in nature and simply follows the laws of physics, there is no AI to speak of but ultimately gravity is going to get you. This too was put together quickly in photoshop, this time I used the rounded rectangle tool to draw the sprite to give it a little more “softness”.

The hero, also a cube was made to be a little larger than the antagonist. He slides around also controlled by gravity, but this time we give you some control. He can jump, a simple tap on your screen pops this fellow in the air. At this point we need to add another constraint to prevent the ever keen gamer of just sticking to the roof and avoiding the antogonist. So, let’s give our hero some fuel, every time he’s airborne he expends fuel and when he’s touching a surface his fuel replenishes. A side effect of gravity means he can’t use the roof as a refueling point because gravity is pushing him back down.

Scoring, how are we going to measure progress? A number of options here but I went with rotations, I added two additional cubes to the mix. One fixed on the left side of the cube and one in the cube hierarchy but located outside of the cube. That way I can measure rotations on trigger (more colliders) as opposed to counting angles, there are a number of solutions here but I went for the quick and dirty one. If it doesn’t impact frame rate, let it be!

Ok, so we’ve got the base mechanics of the game down. It plays nicely and it proved to be quite a challenge in the office. I found people trying to outdo each other, so the next thing to do is add a bragging system and what better than twitter. For this I used a 3rd party twitter component, there are many out there and they don’t tend to cost too much money. Just import and follow the documentation (another reason why I love unity!).

The colour palette didn’t look great, I needed some help here so I went looking for something that would work for the game. I typically use colourlovers.com for my palettes and specifically for this project I used the following one: http://www.colourlovers.com/palette/1930/cheer_up_emo_kid

I use a third party tool called “Screenshot Creator” off the assetstore, it makes the job of doing multiple resolutions a lot easier. You take one shot and it resizes it to your selected resolutions without losing any detail. A real time saver if you are releasing for multiple mobile platforms.

Next I jumped onto oDesk, you can use eLance, 99Designs or one of the many freelance sites out there but my preference is oDesk. I loaded up three requests, a logo an app icon and someone to overlay some text to my screenshots. After looking through the portfolios of some candidates I made my choice and hired some freelancers to make magic with the pixels, something I am incapable of doing.

My initial release was for iOS, so I jumped on to Sensor Tower to look for some appropriate keywords. With the dog show that is the app store it’s important to be found, this is primarily through keywords and organic search. If you are lucky enough to get reviewed (don’t pay for reviews, it’s morally wrong and your customers are not stupid!) you will get some kick off traffic but for organic you need to be selective about your keywords. There is a lot of documentation on ASO and I would recommend looking around before settling on your keyword selection.

Up front when I was thinking about constraints, I remembered one of my favourite quotes:

“I was within and without. Simultaneously enchanted and repelled by the inexhaustible variety of life.”

And that is where I got the name of the game from. Yes, I would have stuffed a whole bunch of keywords into the title and improved my ASO but again I don’t like that. Forgive me, I’m difficult from time to time and I hate nothing more than a 48 word game or app title (IAP’s come a close second on my hit list of hate).

So, we have a name, a game, our screenshots, and an app icon. Now all that’s left is the preview video. Because it’s easier to determine if you think a game is fun by watching actual game play I went with the simple route. I dumped the game on the iPad and recorded natively via the new OS X onto my macbook.

The final step is the upload to the app store, obviously we shaved off a ton of time by outsourcing some of the graphic components but the whole process has taken less than 2 hours and cost less than $40. So, if you are looking at getting into game development but are worried that it’s going to cost you an arm and a leg: fret not! Happy #unity3d #gamedev.

ProgrammingMobileProduction
Get daily news, dev blogs, and stories from Game Developer straight to your inbox
Subscribe