Playing games like Bonfire Peaks can help players work through tough chapters in their lives, but the act of creating the game's mechanics and puzzles can be equally as cathartic for its developers.
Joel Couture
Contributor
October 25, 2021

Bonfire Peaks is a game about moving on, a feat that isn't always easy to do. In it players use puzzle-solving skills to burn objects that remind them of memories of the past which, much like the real emotional task of moving forward, is often easier said than done.

Game Developer had a chat with Bonfire Peaks creator Corey Martin to discuss how to turn interesting interactions into puzzle designs, the game's visual style, and the ways in which developing an emotional game can help a developer deal with things they are going through.

Game Developer: What inspired you to turn burning your belongings into a game?

Martin: I started working on it during a game jam, and the theme of the jam was "Sacrifices Must Be Made". Most people applied that to mechanics, making games about sacrificing resources of some kind or another. I didn't have any ideas like that, so I decided to apply it more literally.

What thoughts went into making said burning into a puzzle game and creating puzzles that involved taking boxes of your stuff and throwing them in a fire?

I wanted to make a game about climbing somehow, and the theme then inspired carrying something for the sake of sacrificing it. Carrying stuff makes climbing harder, so that made a basic framework to explore. In all honesty, initially it was just about checking boxes - does this satisfy the theme in some way? Are there puzzles worth finding in this kind of system? I only started thinking about ‘what is this game really about' later on. 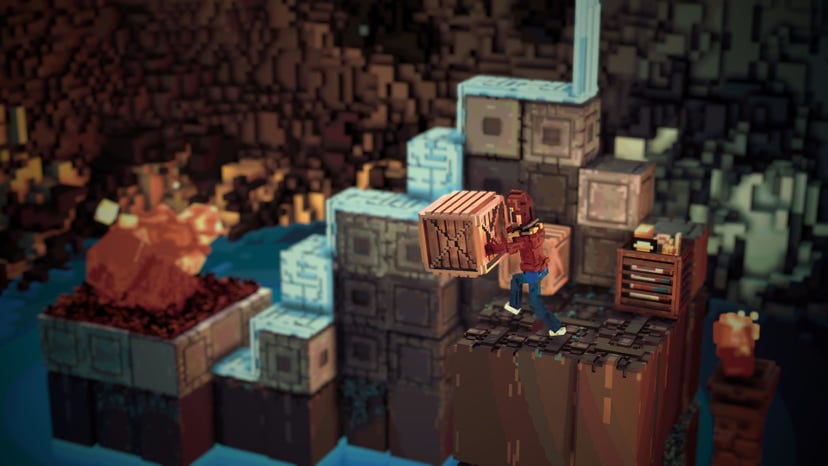 What challenges came from designing puzzles around moving a box around?

It seemed pretty shallow at first, to be honest! I was pretty close to abandoning the game a few times, then I started exploring other level components, and just started mining a surprising amount of complexity. I went from "hmm there's not much here" to being completely in over my head.

Can you talk about some of your thoughts in the creation of some specific puzzles? How you made it challenging for players to get the box where they wanted it to go?

So, my design process, at least at first, is to just play with the system until I find an interesting interaction, then reverse engineer a puzzle that forces that interaction. That makes it pretty easy to verbalize the idea of the puzzle, which is a sort of quality standard I think. If it's hard to talk about the point of a given puzzle, it's probably not very focused or interesting.

What ideas went into creating new mechanics for the game as players progressed? Can you walk us through the thought process for some of these mechanics?

Ideally, I like to aim for a ratio of as few elements as possible : as much depth as possible. If you introduce an element and there's only a couple puzzles that come out of it, it kinda just feels like noise. It dilutes the elegance of the whole thing. 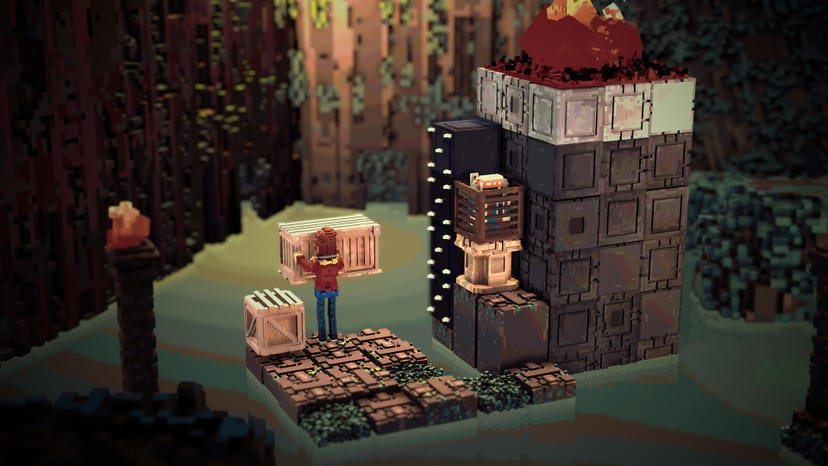 To take a specific example from the game, I added pressure plates that trigger an arrow to shoot at you. From there, I wonder "what's a layout that would require you to use a crate as a shield to block the arrow?". Then, when the arrow hits the crate, what happens? Does the arrow fall on the ground, or is it sticking out of the crate? What are the consequences of either choice? So, guided by tradeoffs between "what is physically intuitive" and "what leads to interesting puzzles", I make decisions and just kind of follow the game wherever it wants to go.

Having trouble throwing your belongings into a fire seems to play into a theme of personal conflict for the protagonist. How did the mechanics and play tie into the game's themes?

I don't think it's too pretentious to see the mechanics as analogous to the themes, though the themes mostly were explored aesthetically, through the art, music, the setting, and the imagery. When designing the gameplay, our goal (myself and Alan Hazelden, who co-designed the puzzles) was just to make charming, surprising, playful puzzles. If anything, I think the gameplay offers a break from the tone, some levity in this otherwise pretty heavy-feeling game.

What drew you to the voxel art style for the game? How did it suit the game's feel?

There've been a bunch of talented voxel artists like Niklas Mäckle, Mari K (who worked on Bonfire Peaks), Paul Riehle and Dima, among others, whose work was super inspiring to me. I feel like there's a lot of potential to explore different styles and moods using high detail voxel art, and there's something really appealing about it to me.

Even though it's pretty new and rare in games, the fact of it basically being 3D pixel art gives it a nostalgic feel that suited the game. It also helps that I am not a 3D modeler, and MagicaVoxel, the software I used, is really easy to learn and get started with. 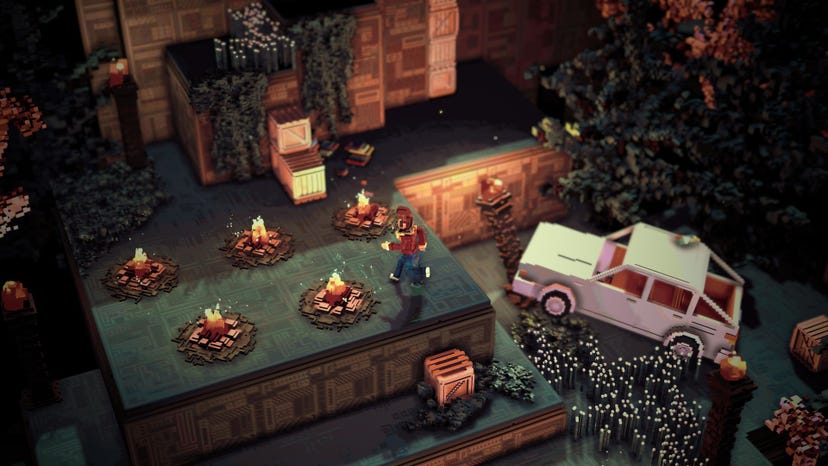 Bonfire Peaks explores some complex emotions about moving on. Did developing it affect you, emotionally, or work you through any of your own feelings? How so?

It definitely helped me process my own struggles with attachment, grief, nostalgia, those kinds of things. Above all, by helping me to clearly name and identify those issues, which is half the battle, I think.

About halfway through development, I was pretty unwell and got diagnosed with panic disorder, which was really helpful to understand. I realized a lot of what I was going through was surprisingly common, and that encouraged me to make the game that much more personal. It's an ironic thing, but I think the more personal you make a thing, the more relatable it becomes.

All that aside, if you don't connect with the sentimentality (or are outright turned off by it), above all I think we've made a great puzzle game. There's no right or wrong way to interpret it or play it, and if you play it, I hope you enjoy your time with it.

ConsolePC
Get daily news, dev blogs, and stories from Game Developer straight to your inbox
Subscribe