Blending Zelda with pinball mechanics in Creature in the Well

Creature in the Well hearkens back to the simple joy of controlling a ball as it caroms around a room, layering a top-down Zelda-like hack-and-slash schema onto one of the medium's most fundamental forms of play.
Phill Cameron
Blogger
May 28, 2019

In the beginning, there was a bouncing ball; from the quivering oscilloscopic image of Tennis for Two to the ricochets of Pong, the earliest examples of video games took inspiration from the jubilant kinetics of real-life ball games like tennis and ping-pong.

Flight School Studio’s Creature in the Well hearkens back to the simple joy of controlling a ball as it caroms around a room, layering a top-down Zelda-like hack-and-slash schema onto one of the medium’s most fundamental forms of play.

According to creative directors Bohdon Sayre and Adam Volker, despite the game’s skill-shot focused design and the abundance of drop targets and ricochet paths in its levels, the team behind Creature actually has more reverence for the likes of Breakout than the pinball tables that its visual design seems to evoke. (“I hope you’re not going to ask me about my favorite ancient pinball cabs,” Sayre jokes).

Like the earliest pinball tables, Creature started out as a single-ball game, where the player character acted as a point of reversal, similar to a flipper. Sayre describes the original blueprint for the game as a competitive multiplayer game born out of their adoration for Rocket League, with two players rallying the ball back and forth, trying to angle the shot into a goal space.

Over time, however, they realized that sort of approach led to a very chaotic experience, akin to trying to play a pinball table without strategically depressing the flipper to “trap” the ball. At first, they tried half-steps - when your character would charge up their swing, the ball would drift towards them, as with a magnet.

Eventually, they decided to introduce the concept of possession - holding a single ball to charge it with energy, then aiming it at a precise target. When that tested well, the team decided to add this to the game in the form of “charge weapons,” which became a major component of a player’s arsenal.

“Just playing the game required so much skill - you had to be in the right place, aim, and shoot, all at the same time,” says Sayre. “Timing is such a crucial component of any game, but it was difficult to factor that in too. We made so many prototypes that I feel like we ended up going through all the classic ball-bouncing games, from Breakout on down.”

The origin of Creature in the Well as a single-player game is a classic “X-meets-Y” video game pitch: top-down Zelda, except there’s a ball, too. Other than a single stick for control, a helpful dash, and a sword-swing, Sayre and Volker had no idea where they wanted to go with the concept. So, they turned their attention from the classic ball-bouncing games to their more modern equivalents, including the Windjammers-like Disc Jam and the dodge-this simulator Lethal League.

From there, the duo faced the opposite problem: they had too many good ideas, and no idea how to stitch them together. Worse still, it was difficult to figure out much of a progression from preventing a ball from hitting the bottom wall a la Breakout to nailing billiards-like pocket shots ten minutes later.

That’s when the team decided to stay true to the Zelda conventions and silo these different forms of gameplay into different dungeons, all of which have their own individual progression. Each dungeon brings its own mechanics and playstyle, meaning that one player who struggles with ball control might find one to be particularly challenging, while another might breeze past it. 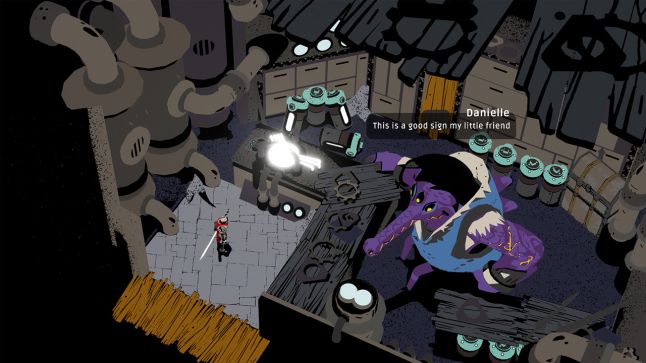 As the game shifted to a more single-player direction, Sayre and Volker had to adjust the layout of the levels from barren arenas designed for competitive play to something that would capture the attention of a lone champion. To that end, they soon discovered that players responded well to levels that were strewn with obstacles, ramps, and targets - not unlike a traditional pinball table, albeit with the player as a portable flipper.

Sayre says they took inspiration from a somewhat unlikely source: the ultra-successful mobile game Ballz, essentially a take on Breakout where you can precisely aim a volley of projectiles rather than reflecting the same one again and again.

“Like in that game, we discovered pretty quickly that players really like the shots where you charge it up a lot and manage to angle it so you can ricochet around, hit a lot of stuff, do a lot of damage,” he says. “They find that more fun than just a regular precision shot. It’s just more satisfying.”

As they continued to bring in players to sample their prototypes, they came to a surprising conclusion: as it stood, the game was just a little bit too hard. Their playtesters’ enjoyment reached its zenith when balls were flooding the screen, hitting every angle and ratcheting up their power score. That ran contrary to Sayre and Volker’s entire conception of Creature’s core loop up to that point.

They envisioned a game of precision, where players would have to be careful about their ball management, not an overflowing pachinko machine. Eventually, they acquiesced to the feedback, but decided to push the more conservative stages to the back of the game, and they found that approach worked surprisingly well.

“The game is actually much harder when you have to play it the way we originally intended, conserving the balls, making sure to make every shot count. It’s a different vibe,” says Sayre.