For Monster Prom: Second Term, Beautiful Glitch had the challenge of creating more content for a narrative game without breaking the lore of the first, all while keeping a thirsty fandom thriving.
Phill Cameron
Blogger
March 18, 2019

High school is a mess of social anxiety and testing anxiety, and Monster Prom from Beautiful Glitch only adds to the trouble by having you deal with it all in a high school filled with monsters. You’ve only got a few weeks to find a creature date before prom, and have to deal with all of the absurd situations that come up in a monster high school in this multiplayer dating game.

Monster Prom: Second Term is the DLC follow-up to the popular dating sim, adding additional content and more creatures for you to romance. Gamasutra spoke with Julián Quijano, creative director of Monster Prom: Second Term, to talk about the challenges that come from creating more content for a narrative game without breaking the lore of the first, as well as the thoughts that go into expanding on what your fan base loved from your initial work in ways that they’ll continue to enjoy.

Why return to their game to make more content?

Most honest reason: we promised it on our Kickstarter as a stretch goal. But after the game released with great success, we knew we had the resources and an audience to do something we loved: to go deeper into the lore of the game, to keep exploring who these characters were, and how we could disrupt the rules we ourselves created for the base game. 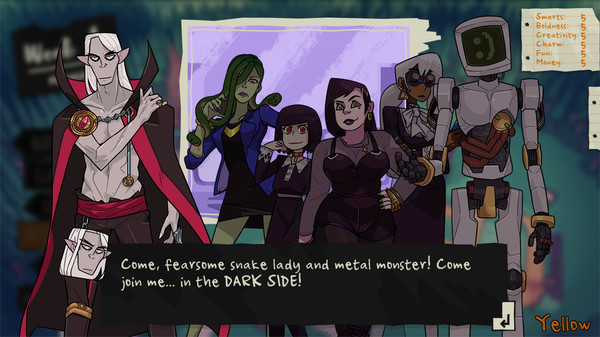 What makes for good DLC?

Of course, this depends a lot on the kind of game you're working on. Ours is a game about narrative - about characters. It is a game designed for a fandom, rather than for the awards or the media. So, I think a good DLC has to scratch the fans' itch for more adventures featuring their favorite characters.

A good DLC has to keep with the winning formula while exploring how it can be done differently. So, a good DLC for this kind of game should...

1. Bring the fans more of what they loved from the base game

2. Show them new depths of the lore

The biggest challenge is keeping things fresh. How can we assure the game will be a sweet treat, instead of something that is getting old fast?

Yes, the community and their feedback affected our DLC. Some choices were made long ago, but some were made when seeing how people reacted to the game. Some new stuff came from things we saw from the fans. We've done this since the beginning.

I remember long before release we had a fan that followed development for some time. He was obsessed with the Yellow Playable Character who had no name at that point. Once, he tweeted about how he decided to call him "Oz" in order to refer to him somehow. We were like "OK, sure", and so that became his official name.

Close to release, we showcased the game at PAX East 2017. We ran a drawing contest, and one of the winners drew this:

We found it hilarious and decided we needed to make a plotline about romancing the Narrator, and so we did: 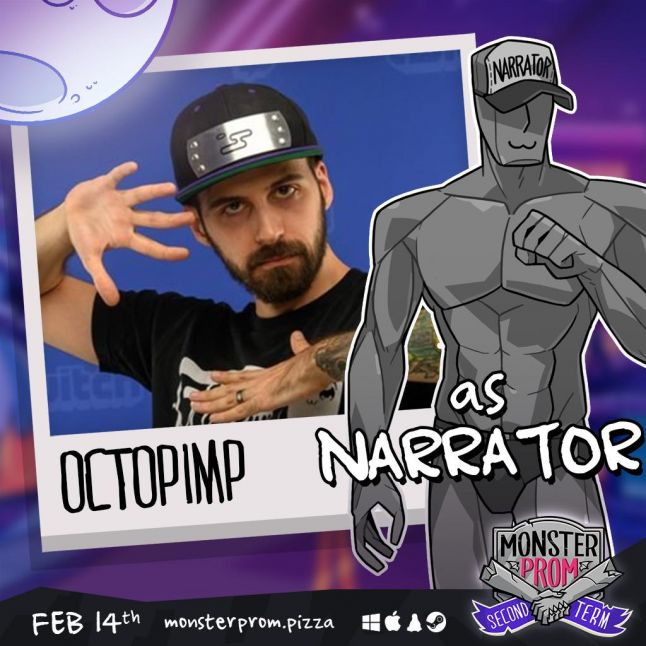 Growing their narrative through DLC

One thinks which new tropes can bring more fun to the table and how they can, at the same time, expand the existing game's narrative universe.

Dmitri is the broody TV show villain while also providing more room for the Coven to grow. Calculester and Zoe are both minor NPCs from a secret plotline that got promoted to love interests while also offering great new tropes: robots and being a fervent fan. Dahlia is not only a good-intentioned intense girl that's all about rivalries, but also the rival to Damien. Bellanda is... welp... Miranda's sister. Violet and Tate were born from one realization: Monster Prom is all about getting a date... but no one is actually dating! So, we explored a (very toxic) couple, while creating a new type of "villain" (those people that pressure everyone into being in a relationship, assuming being single is bad).

I have to say: creating new characters is a challenge... but a very delightful one!

There was one clear rule when adding new events to the DLC: all of them (minus plotlines) had to include one of the two new love interests, as the main focus of the DLC is their inclusion into the game. That didn't stop us of including the original characters there, too.

In general, we try to make each event their own, so even events within the same part of the game have been done trying to seek uniqueness (while keeping a similar formula).

The base idea is to first create an absurd prompt that pairs stuff easily recognizable by the player, like a trope with some unexpected twist. From there, it's all about designing narrative sucker punches. First a sucker punch comes from the main conflict of the event. The recognizable situation is disrupted by an unforeseen conflict. Then we need two more: the options. We brainstorm potential solutions that subvert expectations, this time as unexpected twists for the unexpected conflict. Finally, we try to tango our way into four more twists, one for each outcome: how can we develop an outcome for each option that surprises again?

I play my part as creative director by preparing this foundation (I write the prompts, the options, and some of the outcomes' ideas), and then I give the result (usually a page with ideas on how to direct the event, structured on these seven parts) to the writers, who translate these ideas into hilarious dialogues.

Another important criteria is to build event ideas that play the different characters in the way fans love, but at the same time trying to provide slightly new takes on them. The goal is to keep feeding fans with the characters they love while slowly giving them some depth without sacrificing their parodic and clearly-defined personalities.

Of course, with around 500 events (therefore around 1,000 options 1,500 outcomes and probably 3,000 to 6,000 jokes), not all of them can be winners. But we do our best to keep it as fresh as possible. We're happy so far, with 200,000 people who own the game (which being a multiplayer game, we want to assume maybe around half a million people have played at least once the game) and a super strong active fanbase. It shows us that even if we still have a lot to learn, we're probably doing some things right.

What’s next for the monster matchmakers?

Two challenges appear in front of us, now. First, starting to work on a new project that builds a new IP that can, in its own way, build its own fanbase while pleasing part of the Monster Prom one. Second, tackling the next logical step for Monster Prom: a sequel. And you know what? Pretty soon we will be launching a Kickstarter campaign for that. We're nervous... but we're ready to start!