An Intro to Cellular Automation

This feature takes a look at cellular automation, an algorithmic simulation useful in games, and discusses its use in titles like Minecraft and Dwarf Fortress, as well as other examples, and explains how it can be useful in the context of a game in development.
John Harris
Contributor
May 04, 2011

[This feature takes a look at cellular automation, an algorithmic simulation useful in games, and discusses its use in titles like Minecraft and Dwarf Fortress, as well as other examples, and explains how it can be useful in the context of a game in development.]

What is cellular automation?

My name is John Harris, and I am working on a game called In Profundis (Kickstarter project), that simulates a large cavern world using what is called cellular automation. It allows water to flow, gases to spread, boulders to fall, and other systems propagate and change over time. To perform these feats, it runs a complex system that, each frame, decides on the contents of each cell of a grid-based game world.

Cellular automation is a generally overlooked tool in the game designer's toolbox, but a number of very interesting games have made use of it in one way or another. A partial list: Boulder Dash, SimCity, ADOM, Falling Sand, Dwarf Fortress and Minecraft.

Note those last two, currently darlings of the indie community; both games are popular, at least in part, due to their complex world simulations.

In Profundis uses it in a matter somewhat similar to Dwarf Fortress, although not as complex and in 2D space, as opposed to 3D. (N.B.: I interviewed Tarn Adams, programmer of Dwarf Fortress, for Gamasutra about some of the game's implementation details, including its fluid dynamics.)

By the widest possible definition, cellular automation is a simulation technique that involves performing some operation on the contents of the cells of a regular grid, repeatedly, the results for each cell replacing the previous contents on each pass.

It is a generally overlooked tool for game development for various reasons (we'll get to its drawbacks shortly), but it's been around for some time. The beginning of cellular automation is generally considered to be mathematician John Horton Conway's Game of Life. Life considers the fates of a number of counters on a board who live and die according to a small number of rules.

The player runs the board, seeded with a starting configuration, through a sequence of turns. On each turn, empty spaces with exactly three neighbors experience a birth, and receive a new counter by the next turn. Counters with fewer than two or more than three neighboring counters experience death, and are removed by the next turn. Neighboring spaces are those adjacent either orthogonally or diagonally, thus each space has eight neighbors. And that is all there is to Life.

Okay, that is far from all there is to Life. Those are the rules, but cellular automation is an excellent vehicle for illustrating the principle of emergent complexity. Simple patterns with small numbers of counters can explode, over many calculations, and create huge tableaus filling thousands of cells.

Life's rules are simple, but their consequences have, to this day, yet to be fully explored. (For more information on Life, a good place to start is the Wikipedia page. Also of note are the installments of Martin Gardner's Mathematical Games column in Scientific American, that first publicized the game to the general public. To play around with it yourself, I heartily suggest looking into the open source CA simulator Golly, available for most current platforms.)

While Life can be played without a computer, all the recent discoveries in Life behavior have depended on computer Life simulators. Some of the earliest entertainment software programs written were Life sims.

Not all cellular automation is as deep as Conway's Life. In fact you'd be hard-pressed to come up with a better behavioral-richness to calculation-time ratio. But we don't need elegance of Life's caliber, or anywhere close to it, in order to make good use of cellular automation.

For a game developer, what is useful about cellular automation?

This may seem to be a lot of drawbacks, but the advantages are profound, and make possible world simulation with a level of nuance it is difficult to otherwise implement.

A Look at In Profundis' Fluid System

While cellular automation must be designed with an eye towards minimizing processor time, it is not necessarily the case that it runs slowly. In Profundis' is fairly complex at it stands, and can handle large amounts of flowing liquid and spreading gas while still maintaining frame rates upwards of 45fps. This, despite the fact that the game engine is currently written in Python, using Psyco for speed!

Additionally, In Profundis' system is designed in such a way that partial frames can be run without sacrificing the integrity of the simulation; each line can be calculated separately, and only a portion of the CA field need be calculated each game frame.

Here is a description of how water is handled in my system. The full system can simulate multiple fluids with different spread rules and densities, but water is an excellent fluid to begin simulating, and can provide interesting game dynamics all by itself.

Each space in the world that contains fluid has a height variable that indicates the amount in the space, from 0 to 8. Let's go over what In Profundis does when its update loop encounters water. (Actually, this isn't exactly what happens -- it's a description of the code from an earlier version of the game. The current version is probably too complex to describe easily.): 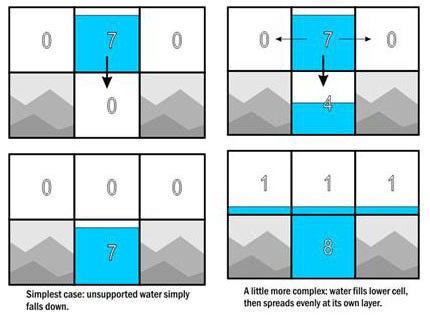 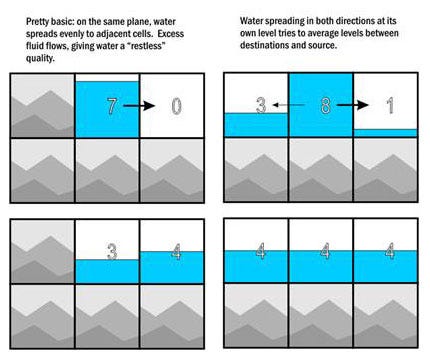 In all these cases, I also set a nocalc flag on cells water flows into, to prevent cases of water apparently teleporting across the screen if it should get flowing in the direction that we're calculating down the line this world-frame. (For more on this, related to the "partial update" problem mentioned above, see below.)

The takeaway point here is that I covered all the relevant possible situations that a cell containing water could exist in, and just coded what should happen for each one.

I didn't worry about what water should do as a body; I just focused in simulating a little bit of it, and iterated that through the whole screen in a loop.

It is not that complex an algorithm; rarely should good CA code get really windy, since it may be executing hundreds of times a loop. One tries to write simple code, and let all the cells acting together to provide emergent behavior.

As a result, water pouring into one side of a U-bend tunnel in my game will currently fail to rise up the other side.

You can watch a video of In Profundis' water simulation by clicking here.

A couple of optimizations my engine uses:

My solution to the "partial update" problem noted above is unusual. I don't keep a separate copy of the grid. Inspired by some of the work done by hobbyists working on improvements to the Java Falling Sand game, I instead write all changes directly to the grid, reducing memory load and processor overhead. Some special facts of In Profundis' grid help me to avoid the problem:

Even with these considerations, there are still occasional moments where the sequential nature of the loops may cause computational artifacts. These are smoothed out somewhat by alternating left/right direction when I calculate each line, and also alternating every frame. This solution was inspired by the work of the web Falling Sand community, who have created a number of expanded versions of the original Falling Sand game. They are of great interest to anyone seeking to make game use of cellular automation.