After tragedy strikes, a dev's friends strive to complete his game

In the wake of an inexpressibly terrible tragedy, developers are striving to complete an inspiring and unique project.
Simon Carless
Blogger
April 04, 2017

Former Harmonix programmer Roger Morash had been working on his passion project, a co-op platformer called Shard, for years before he died in January of this year.

It’s a game about having the power to reshape the world. Two players go on a journey across dimensions, each acquiring different powers along the way. They have to collaborate to progress, changing their surroundings as well as themselves.

Unfortunately, Morash wasn’t able to finish what he started. But the people he assembled for the project, including artist Anita Tung and musician Kasson Crooker, have decided to continue working on it. They hope to release Shard as a loving tribute to Morash.

The core principles he laid out for the game will be carried through to a finished version. Through its themes and mechanics, it will stand as representation of the values that were most important to Morash, and which he shared with anyone who came into contact with him and his creative work.

It was an unexpected tragedy that took the lives of Morash and his wife Valerie. She worked as a researcher at the Smith-Kettlewell Eye Research Institute, and had a Ph.D. in Psychology as well as an enthusiasm for board games. Together with their two cats, the couple died due to “acute carbon monoxide intoxication” in their Berkeley, California home on January 23rd, 2017. 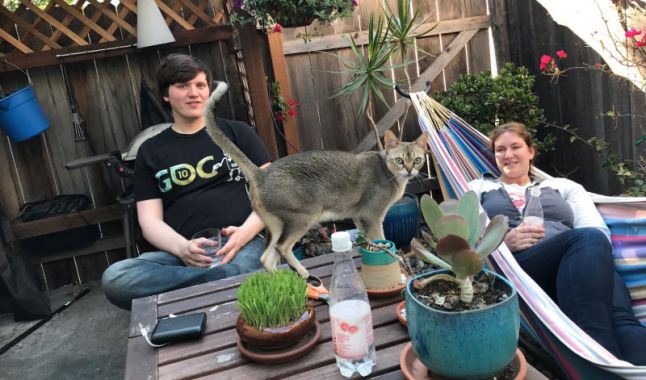 A day after the news came out, game developers who were close to the couple launched a GoFundMe project to raise money for the funeral costs. Many of them also voiced their sadness and paid their tributes on social media. It turns out that many of those developers also offered their support to Tung and Crooker in the event that they could continue working on Shard.

"Morash's plans for the entire game are outlined in an in-progress horizontal slice demo. But there’s still a lot that remains to be done."

“It’s really the support from various game development communities that has encouraged us to keep producing the game itself,” says Tung. “We would never attempt to do this without the advice and support of so many incredibly knowledgeable and experienced people.”

Both Tung and Crooker wanted to release Shard in some form after Morash’s passing, even if it was the vertical slice demo or the engine code. But with the level of support they have received from the developer community they’re able to look at carrying on the work Morash was doing and push it closer to his final vision for the game.

Fortunately, before he died, Morash had been working with Tung on a horizontal slice of Shard that showed how the game played out from beginning to end. That means his plans for the entire game are outlined in this in-progress demo. But there’s still a lot that remains to be done, and it’s too early to say how much will realistically be available in the released version of the game.

It’s not only Shard’s capacity to serve as a tribute to Morash that is driving its continued development. Tung and Crooker both think of it as “a beautiful and original game, and [they] want other people to be able to experience it.”

Morash started working on the game after reading a blog post by Roger Johannson about making the Mona Lisa out of 50 polygons via genetic programming. Morash wanted to expand on that idea, and did so by programming an algorithm that broke down images, and frame by frame animations, into triangles.

“Since this triangle generation process means that all of the in-game assets are made of particles, this opens up a huge world of strange physics interactions that can be added procedurally instead of needing to be animated by hand,” Tung explains.

Everything that constitutes Shard today, including its name, comes from the visual style generated by Morash’s algorithm. That includes how the narrative and the gameplay evolves -- or rather devolves -- as players progress through the levels.

Shard starts out as a co-op platformer with players sharing the two same abilities (with six in total collected throughout the game), meaning if one player is using an ability, it becomes inaccessible to their partner. But it’s made easy for players to trade their abilities at any time, so that if one of the environmental puzzles requires a level of skill that one player doesn’t have, then the other player can give it a go.

“This was always one of the most important things to Roger,” says Tung. “He always enjoyed playing games with other people, and wanted to make something that players could share, whether or not they were familiar with video games.”

What happens as the players move from one dimension to the next is the platformer aspects of the game become more abstract. Tung uses the word “chaotic” to describe the later stages of Shard as the powers become less familiar and typical, and let players do more interesting things, but with less direct control.

“The world itself also trends towards chaos as the game goes on, specifically in one moment where the player forms dissolve into the environment,” says Tung. “That’s not where the game ends, but it is a climactic moment in the narrative.”

Morash had been working on the code for Shard for years between contract work before he brought in Tung in October 2013. “He originally hired me as an art contractor, but after my contract was up, he invited me to become a member in the company and have a larger role in design and narrative development as well as art,” Tung says.

She worked close with Morash in the past few years, and most of all admired his drive to do everything the best possible way, no matter the cost. “Some people get paralyzed by their own perfectionism, but in a way I think Roger was the opposite," Tung says. "He was continually working towards the most elegant and appropriate solutions, but was always doing so in iterations.”

“He recognized that it was easier to improve on something existing than to come up with the right solution from scratch, and so there was never any hesitation to experiment in any aspect of the game, whether it was a new mechanic, the design, the art, or the story.”

Tung adds that Morash was also very open with Shard, which is particularly notable given that it was his solo passion project for years: he would constantly discuss narrative and mechanical ideas with Tung in order to improve them.

Crooker also remembers Morash’s openness and the flexibility he was given to bring the audio alive for Shard. He previously worked with Morash at Harmonix, and was brought in at around the same time as Tung, focusing on the music and sound design.

“As Roger was creating and customizing the game engine and editor for Shard, that gave us a great deal of control over the exact tools we'd need to bring the audio alive,” says Crooker. With that freedom, Crooker was able to exercise his interest in blurring a game’s score with its sound design, as well as mixing vintage synthesizers with traditional instruments like classical guitar and strings.

His compositional approach matched the fractured visual style of the game. At first, he created long-form pieces of music that captured the mood of Shard’s environments, then he would break them up into smaller chunks that could be triggered independently. The result is a series of dynamic soundscapes that evolve and react to player input and the gamestate.

“We also wanted to have the audio system tightly coupled with the genanim system that could res-down or up the number of triangles on the screen,” says Crooker. “We had experimented with using an audio codec to ‘de-res’ the audio to very compressed data levels yielding an artifacted sound which had a similar feel to when the triangles on screen were at their most primitive levels.”

Morash got his start in game development at Demiurge Studios, where he worked on games like Titan Quest and Mass Effect. He then moved on to Harmonix, where he worked on music games in the Rock Band and Dance Central series, before getting the role as Code Lead on Amplitude.

He formed his own company, called Glug Glug, in 2011, which was around the same time he started work on Shard. Those who were lucky enough to have Morash give them a peek at Shard  remember both his friendly nature and his excitement to share his game.

Hopefully, with the work of Tung, Crooker, and other collaborators, Morash’s vision to bring people closer together through his game won’t go unfulfilled. Anyone wanting to know more about the project can sign up for a newsletter at the Shard website, or follow the project on Twitter or Facebook for updates.