"VR compability was implemented well after we had started development," says lead VR engineer Kazuhiro Takahara. "'It feels like working on two games' was a common sentiment among the development staff."
Simon Carless
Blogger
March 03, 2017

VR is a powerful tool for creating horror experiences, which rely more than most genres on their audience feeling truly immersed and present. Kazuhiro Takahara, lead VR engineer on Resident Evil 7 Biohazard explains that with a traditional horror game, “You can simply turn away from the screen and come back to the reality of your everyday life. Light shines from between the curtains and some half-read comics might litter your carpet. With VR, no matter where you look, you’re stuck in the decrepit mansion. You have nowhere to run. Any moment you might hear the creeping sounds of an enemy coming to attack you from behind.”

New technology inevitably comes with new challenges, and this is particularly true with virtual reality. Not only does it represent a new way to play games, necessitating new control schemes and gameplay philosophies; it’s also a new way to see and experience them.

Drastically changing perspective means a whole new suite of considerations, and while a number of approaches have been developed to tackle some of the peculiar wrinkles of VR, there’s an added level of difficulty when you’re simultaneously designing a game for VR and for traditional play.

Resident Evil 7 Biohazard, the well-received recent release in the venerable survival horror game franchise, is something of a return to the methodically paced roots of the series. It's also one of the few AAA titles that has dared to offer its entire game experience as both a traditional game and a VR experience. According to Takahara, this meant making up a lot of the plan as the team went along.

“Contrary to what you might think, VR compability was something we implemented well after we had started the development cycle,” says Takahara. “Development for Resident Evil 7 Biohazard started in 2014, and there was already a decent amount of us that were interested in VR technology. However, official development utilizing VR didn’t actually kick off until October of 2015.” 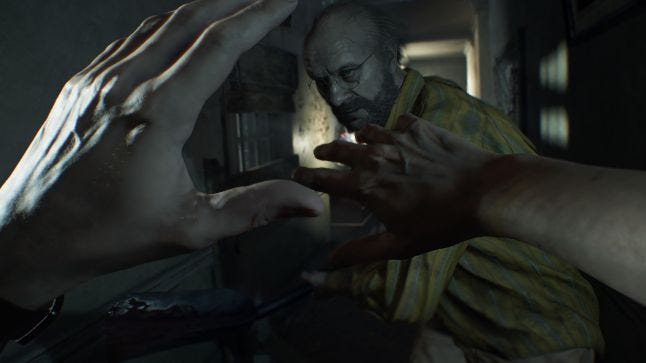 In an era where the majority of VR titles are still tech demos or very limited proof-of-concept experiences, the idea of building an entire AAA game in VR was daunting. So the team at Capcom started with a smaller piece of content, the Kitchen demo they unveiled at E3 2015. In it, a player is strapped to a chair and menaced by a woman with a cleaver.

When we saw all the positive user reception and how well horror and VR blended together, it gave us the confidence and motivation to take that extra leap forward," says Takahara. "After the continued positive reception of Kitchen at Tokyo Game Show, that was when we officially kicked off VR-compatibility.”

Despite all the additional challenges that a VR version represented, Takahara and his team saw great potential in this new medium.

“The strongest appeal was offering the user a truly immersive experience directly playing through the eyes of the protagonist Ethan Winters," he says. "We wanted people to really feel like they were in the Baker estate. Even the subtle sounds of rain in the background or the floors creaking under your feet would add an extra level to the feeling that you’re really there in VR. We really wanted people to forget that they’re wearing headphones and a headset and get truly lost in the illusion of being in another world.”

But while VR offered incredible potential, it was also an undiscovered country for Takahara and his team. They quickly realized that building a game in VR is a very different experience, further complicated by the necessity of maintaining a unified core experience between two versions of the same game.

Inevitably, a dedicated VR team had to be created to handle the unique challenges around the new tech. “Many of them were R&D members who had tinkered with VR technology in their spare time as well," says Takahara. "We had to make a lot of modifications to the system programming and assets to work with both VR and non-VR."

Takahara says that they experimented quite a bit with controls, but inevitably landed on the scheme you see in the final build. "Analog stick controls are a bit of a taboo in the VR world, but we decided to move forward with it because we wanted to push the fact that the player is Ethan Winters.” 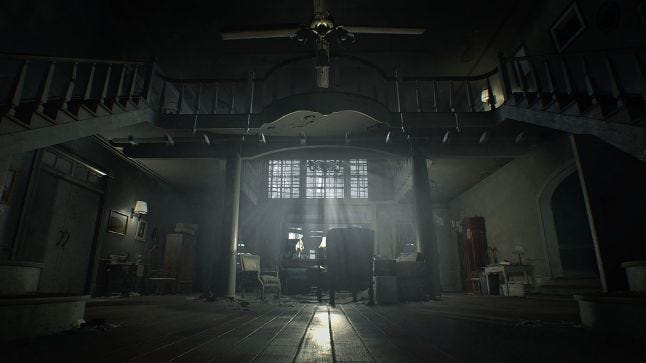 That commitment to grounding players in the main character’s shoes meant that a lot of convenient solutions to some of VR’s most daunting challenges weren’t viable. Takahara didn’t want players being able to teleport from room to room with the kind of warping controls that have solved the nausea issue for other devs, so the team made the difficult decision to stay with analog stick movement.

"By unifying the control scheme between VR and non-VR, we figured it would be easier for players to bounce back and forth between the two modes if they so desired."

“It broke the level of immersion we were trying to achieve,” Takahara says. “Warp controls and other VR movements were created from a perspective focused on entering a game through its gameplay. Allowing the player to live as Ethan Winters inside a horrifying situation, investigating every nook and cranny, fighting for survival against impossible odds -- that’s what we were striving for.”

It was also a matter again of maintaining unity between both versions of the game. “By unifying the control scheme between VR and non-VR, we figured it would be easier for players to bounce back and forth between the two modes if they so desired. The more you stray from commonly established controls, the more you force the player to be conscious of a new control scheme.”

While analog control has caused a lot of issues in other VR experiences, Takahara says initial reception was encouraging. “We got a lot of positive feedback from users, much more so than we anticipated. We use a snap turn,” which allows players to move the camera in fast 30 degree intervals, alongside a quick turn that allows them to immediately turn a full 180 degrees. “Applying this set angle movement to the right analog camera movement helped a lot of users be more comfortable with the VR controls. In the Kitchen tech demo, we didn’t have to worry about camera controls, but it was an absolute-must for us to figure out how to tackle VR movement in the main game. The snap turn was our best option for the VR camera controls, though there is also a smooth option as well so that the player can choose their preference.” 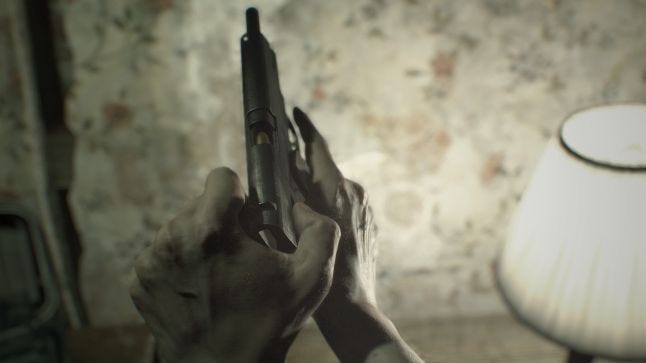 Takahara adds that while VR presented a significant number of obstacles, he’s looking forward to working with the technology again.

“This is definitely something we’d like to utilize in future products. We learned a tremendous amount from working with VR. What was most inspirational for me was the development team taking initiative in tackling a giant challenge. There was zero assurance that we’d succeed, but we were motivated by positive response to Kitchen and recognizing that this was a brand new experience that no one had seen before."

"There was no clear answer and no foundation to build on, we had to base much of our efforts on having a clear vision of the end product and believing in what we were creating. We had to maintain an open mind, even when we received comments like, ‘you should avoid this’ or ‘this might be uncomfortable’."

“We had to constantly look at the larger picture, tell ourselves we were entering uncharted territory, and take one step at a time towards that goal. Making Resident Evil 7 Biohazard work in VR helped us appreciate how to traverse a world of unknowns with no clear right answer, and I have a strong sense of pride towards what the team was able to accomplish.”