A closer look at the deck-building hack-and-slash success, Book of Demons

Book of DemonsÂ is an unlikely marriage of hack-and-slash and deck-building mechanics. Polish studio Thing Trunk was able to not just make it work, but make it an indie Steam success.
Simon Carless
Blogger
January 18, 2019

Book of Demons is an unlikely marriage of hack-and-slash and deck-building mechanics. But despite this unusual combination, Polish studio Thing Trunk was able to not just make it work, but make it an indie Steam success.

This is the first game for the six-person studio, but its individual members have been around the game dev block, working on match-3 and hidden object games. Book of Demons pushed their skills in new directions.

In an email interview, studio co-founder and producer Maciej Biedrzycki filled us in on Book of Demons' inspiration and design.

Make sure to check out the video above if you're unfamiliar with Book of Demons' unique gameplay. For more on the game's development, visit Biedrzycki's Gamasutra blog.

A "roguelite" tribute to Diablo

Book of Demons is our tribute to Diablo, and most of all we wanted to capture some of its amazing atmosphere. It’s all dark and gloomy, the action takes place in a distant, almost abandoned village away from the busy capital and crowded routes. There’s literally no one else other than you to save the world from the evil that wakes up deep underground. It’s an awesome simple story about the battle of good and evil and we wanted it to stay this way. 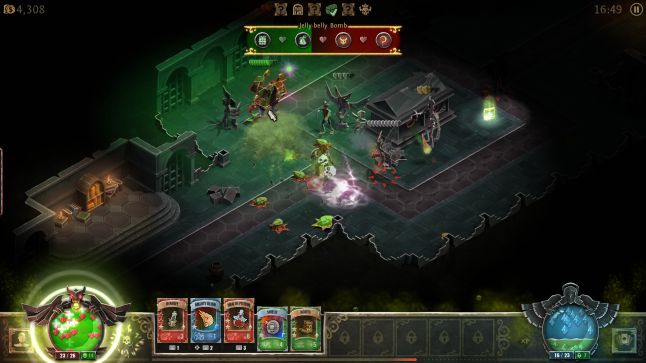 When it comes to game mechanics, however, we wanted to take a different tack, to experiment with new styles of gameplay. Our goal was to simplify the game and make it much easier and faster to play. The original 1996 Diablo also introduced many simplifications as the CRPG games of that time were often complex and slow to play. Our different take on the now overused standard hack-and-slash mechanics is also a kind of tribute to the times when developers weren’t afraid to experiment and make their games unique.

Technically, the [roguelike] mode in Book of Demons should probably be called “roguelite,” as there are obviously some deviations from the classic formula. When we first launched the game, it had only one “normal” mode, but during the Early Access we quickly realized that we can’t satisfy all kinds of gamers without giving them some kind of choice at the beginning. That’s when we decided to break the game into three modes: casual, normal, and roguelike.

Roguelike is the only mode which features perma-death, but unlike in classic games, gold is the most important resource. You get resurrected only if you can afford it. That’s why gold is even more important than your HP.

Of course, there is much more to Book of Demons' roguelike mode -- healing is very restricted, monsters are even more vicious and skill cards are encountered in totally random order, so you might start with cards that you even can’t use. Beating it requires both skill and luck.

In this sense, Book of Demons is very much a hack-and-slash. There is a story in the game, but it’s optional and you can play without listening to any of the gossip. It’s more about creating the right mood. And even though we don’t follow the usual hack-and-slash formula when it comes to gameplay mechanics, the core is still there.

While the movement is bound to paths, you still get to explore the maze and at every turn you decide whether to push forward or to retreat. There’s no loot in the usual sense, but we have skill cards that replace spells, items and gear. 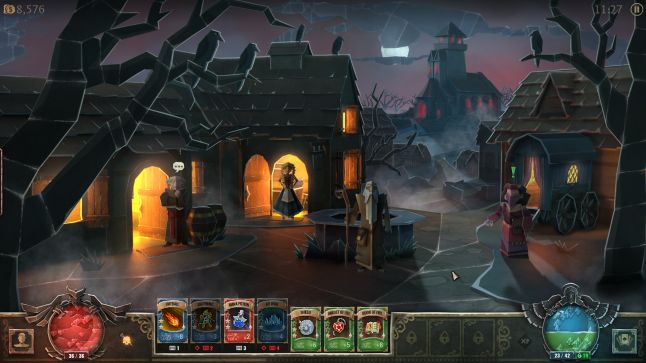 We were looking for a strong visual theme right from the beginning, because we knew the game would be part of a series. The art-style is something that will be binding all of the games. Having each game represented by a book made sense, especially since we wanted to tell universal stories and make everything generalized and even archetypal.

Not sure if you noticed, there are no proper names in the game -- we have The Town, The Cathedral, Barmaid, Sage, The Cook, The Antipope, etc. It’s really a universal story, just like in a fairy-tale, the details of the background are not so important -- it’s all about you and the adventures that you have.

A mode that respects players' time

Book of Demons contains a feature where the player decides what length of an adventure they wish to have before beginning. The game lets players decide, in terms of minutes, about how long a session will last, but also informs them about how much reward it’ll be worth and, as a “Completion” percentage, how much total progress in the main quest will be made. Thing Trunk refers to this feature as “Flexiscope.”

Back when we were younger and went to school, we used to play video games a lot. Those were magical times and it’s something very hard to do nowadays for people like us. You’re not so young anymore, you have your work, you have family you have to care for and you just don’t have as much time as you used to. Many games nowadays require you to spend a lot of time with them in order to properly enjoy them. 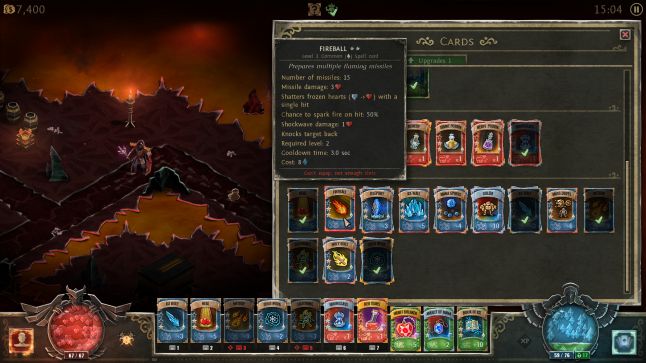 With Book of Demons, and with the whole series, we wanted the game to adapt to your schedule and let you have fun no matter how much time you have. We figured there is more people like us, and this is why we created Flexiscope. I guess we weren’t wrong as we get a lot thanks for this feature.

[Completion percentage] is progress towards completing the main story and slaying the Archdemon. The game is pretty linear in terms of story and events that take place. Once you finish the base campaign you can continue playing in what we call the “Freeplay” mode. There are many goals which can be completed in Freeplay, like unlocking new difficulty modes, mastering quests, reaching the level-cap for your character or finding all of the cards for your class.

On the future of the series

Book of Demons is just the beginning of our journey. Our vision is to make a series of seven games, each designed in a similar fashion, but telling a different story. Each game will be a tribute to a classic PC game, one of our favorite games from our childhood. This will take a lot of time and effort, but seeing how enthusiastic some of our gamers are, we can’t back off now. We just hope we won’t disappoint anyone and that the next games will be as good, or even better than Book of Demons.