6 musts for a perfect platformer, from the Yooka-Laylee team

Yooka-Laylee is a Kickstarter smash, coming as it does from a team of Rare veterans. With that in mind, Gamasutra asked for platformer development wisdom from the team.
Phill Cameron
Blogger
May 13, 2015

Though this week's launch of the Bloodstained: Ritual of the Night Kickstarter by Koji Igarashi has stolen some attention, Yooka-Laylee stands out as one of 2015's most robust crowdfunding successes. The Nintendo 64-inflected platformer from a bevy of Rare veterans has captured the attention of a huge number of backers and raised over $2 million so far.

It's not a surprise, given the pedigree of the team at Playtonic Games: All of the game's leads worked at Rare and many developed the Banjo-Kazooie games, which Yooka-Laylee stands as a spiritual sequel to. With that in mind, Gamasutra asked for platformer development wisdom from the team. This collection of tips across every discipline is required reading for teams considering making character action games. 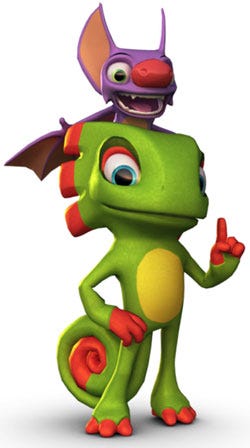 "Appeal. If the first time someone sees the character there isn't a connection of some sort, then I've already lost. Expression is a key part to the appeal, not so much in-game, but for posed artwork, so I spend a good deal of time ensuring that the character is capable of a few necessary expressions. Appeal also comes from the overall shape and stand-out features, such as Yooka's crest design, and how the character is posed/animated. Sometimes appeal is something of an 'X-factor,' but get these things nailed down and you'll be on the right track!" - Steve Mayles, character artist

"Be entertaining. You want to have fun with your character at the most basic stage, so just moving something around with the controller should feel fun and engaging. In the past I've started with a cube. If you can make that move, turn, jump, accelerate and slide to a stop, and it maintains your interest, then you're off to a good start!

"Remember that gameplay trumps animation -- your priority is to make it feel good first, then make it look good. For example, from an artistic point of view you might want your character to crouch before they jump, but for a responsive platformer having a delay before they leave the ground is usually not desirable.

"Also consider that you are supplying input to a game character via a few digital buttons and maybe an analog stick, that's actually a tiny bit of information, so you need to extract everything you can from those inputs and use them to bring the character to life in a responsive and meaningful way.

"So for example, if your character is heading one way in the game world and your controller input is directing them a totally different way, you might make the character lean towards the input direction, and scale the lean amount relative to the delta between the two." - Chris Sutherland, project director

"Surprise. Try and surprise the player in lots of ways across everything the game does. It could be a scenario, a boss, a mechanic or even a cheeky dialog, but try and always give them something that makes every play session memorable." - Gavin Price, creative lead

"Be efficient. Off-the-shelf engines and middleware are worth it! There is always the temptation to start a project by writing the perfect engine from scratch, but unless you can really innovate in a specific area it is more likely that you reinvent a wheel that someone else has already perfected.

"You can then spend your time on polishing the game and improving the workflow instead of maintaining the software you wrote in a rush to get everyone started. In the past, we wrote an engine specifically for one game and one platform, which then required more engineering work for any new game and any new platforms." - Jens Restemeier, technical director 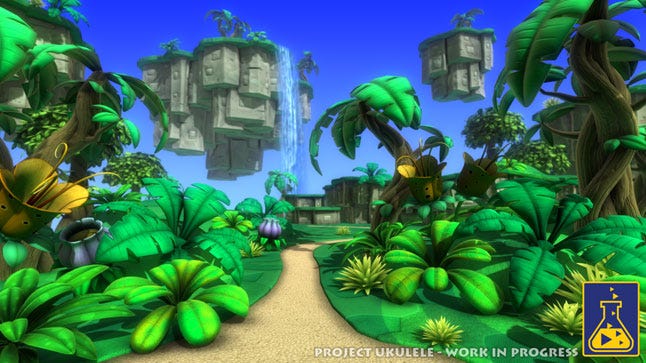 "Provoke wonder and exploration. There's nothing better than entering a new world and being able to explore every nook and cranny trying to find those subtle clues to those secret areas that you just know are there somewhere.

"At the same time, a good platform environment also needs clarity so that people can clearly identify where they can traverse -- nothing frustrates people more than getting lost and going aimlessly round in circles. Try to give clear signposts and landmarks to help them navigate the level easily. - Steven Hurst, environment artist 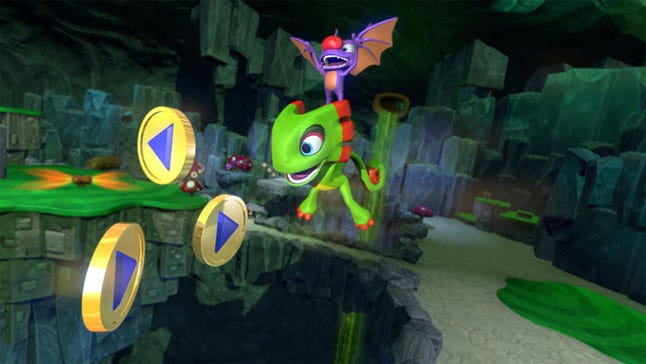 "Be smart. Visually, collectibles in a platformer fulfill more functions than just being something shiny for you to collect lots of. Particularly in a 3D platformer, it's important that as well as creating something visually appealing that tempts the player to collect them, that the collectibles stand out from the background and are also easily identifiable at a distance, even when subjected to visual effects like depth of field making them blurry at a distance.

"The humble collectibles are possibly some of the most versatile and useful elements in a platformer, so you need to make sure the visual design helps them fulfill all these possible roles." - Mark Stevenson, technical artist