5 innovative game weapons that every dev should study

We asked several game design luminaries for their take on of the most interesting, instructive and innovative weaponry in games.
Kris Graft
Publisher
July 01, 2016

But for every hero-hungry baddie you throw at your audience, you have to give them some means of dispatching them. Iconic weapons can often be the most memorable features in a game, and can inject as much unqiue personality into the proceedings as any NPC or boss. Their look, their feel, and their mechanics are a core component of many of the best game designs.

The weapons that developers provide to players send ripples throughout the rest of the game— which is why it’s so important to create weapons that are interesting, unique, and add something bigger to the game as a whole.

We reached out to some star devs for their suggestions of weapons that offer instructive insights to everyone who's interested in the medium. 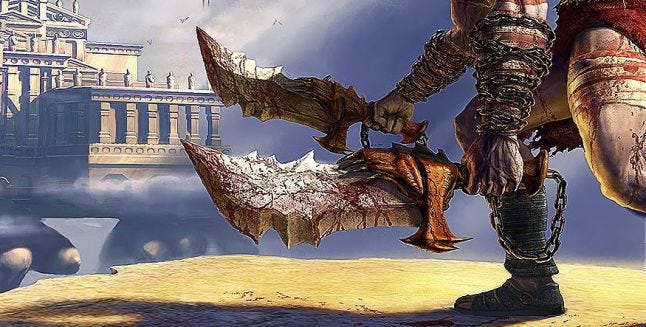 1) Blades of Chaos, God of War

Boss Key Productions founder Cliff Bleszinski points to the Ghost of Sparta’s blades as weapons that pushed the boundaries of a genre--in this case, the third-person melee action game--in a way that offers many new possibilities of weapons and fighting styles.

Bleszinski praises series creator David Jaffe for outfitting Kratos with weapons that truly took advantage of the 3D gamespace. The twin blades are attached to a chain, which means that in addition to slicing and stabbing, they can be swing around, creating a 360 degree circle of devestation around the character. “Third-person melee is a tricky thing to get right,” Bleszinski says. “And Jaffe solved this so eloquently with the blades. By making attacks sweeping and radial and ‘broad stroke,’ he managed to make one of the most satisfying core melee experiences ever—there’s a reason many melee games before this were strictly on a 2D plane.”

TAKEAWAY: When brewing up ideas for weapons, think beyond the constraints that have typically limited your genre. 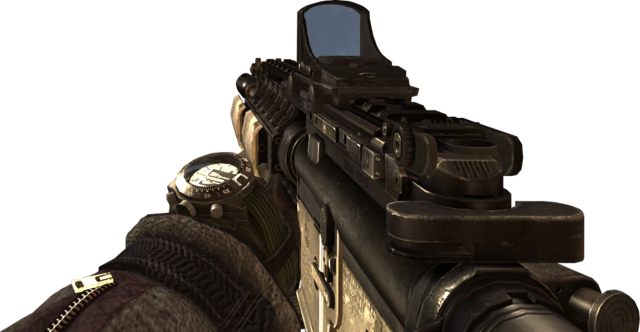 This weapon was a fundamental reason for the success of Call of Duty 4, which has sold more than 15 million copies, and set the stage for an annualized blockbuster franchise. But it wasn't designed by the devs at Infinity Ward--it was designed by the Colt's Manufacturing Company. The way that this real-life weapon was incorporated into the game is what's so revolutionary about it.

“Some things translate well into games, and this was a perfect example," says Pascal Eggert. He's a visual designer at Crytek who helped craft iconic weapons like the SCAR from Crysis.

Infinity Ward didn't just borrow the form of this gun--they borrowed its aiming tools. “The M4A1 is the first perfect implementation of right-click-aiming--it began the whole ‘look through small rectangles to aim’ perspective that every modern shooter employs today," says Eggert. "Due to the unique look of the real-life rectangular Eotech Red dot sight and its real-life advantages in aiming, shooters fundamentally changed.”

TAKEWAY: Take insprirations from real weaponry when it makes sense to do so.

A new weapon can add new dimensions of gameplay, and new strategies that the player needs to think about and incorporate. Bleszinski points to the rocket launchers from iD Software's Quake as a great example: The weapon's explosive impact just doesn’t dispatch enemies. It affects the immediate environment in interesting ways that players can exploit. 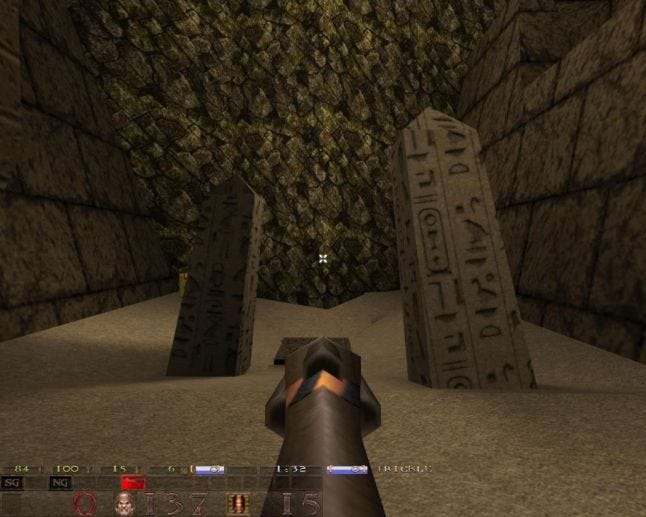 “The simple addition of radial physics momentum to this weapon led to several things,” Bleszinski explains. “First, the idea of hitting someone with splash damage and sending them flying into a hazard...or into your next timed rocket, which yielded the idea of ‘juggling.’”

A glancing hit can effect enemies in unpredictable ways. “Instead of stunning someone or locking them down you merely shift their direction so they can still potentially counter and shoot at you, or use air control to alter their trajectory,” Bleszinski adds. “Too often core mechanics like these are forgotten in a post-Call of Duty world.”

Suddenly, a weapon just doesn’t become an item that generates a singular result: Shoot enemy A and enemy A is defeated. It’s more than that, in the case of the Quake rocket launcher: Shoot enemy A, but how will enemies B, C, and D react? Or how can you involve them in the attack, too?

More innovative gameplay was born out of this addition, including the rocket jump — using the momentum to propel yourself upward. This began as a player-discovered exploit, but became a core mechanic in the Quake franchise. 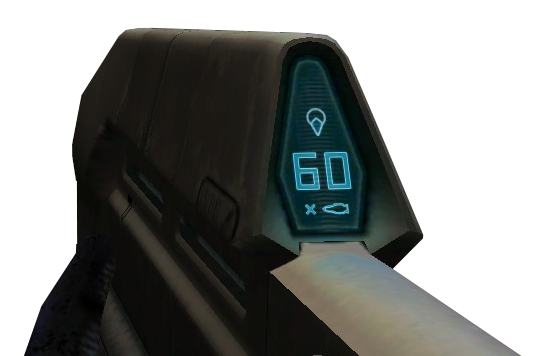 Bungie created one of the most popular gaming franchises of all time. Halo was Xbox’s golden goose and it sparked an interest in first-person shooters among many young gamers. Part of the reason? The MA5B Individual Combat Weapon System introduced in Halo: Combat Evolved.

For starters, it's a masterpiece of futuristic design. With its sleek streamlined shape and LED readout, the weapon is as instantly recognizable as any character or vehicle in the franchise. Accuracy degraded after a couple of seconds, subtly luring players into the endlessly gratifying loop of short bursts of fire culminating in a melee attack.

“The MA5B is not just a great visual design, but it played a key role in bringing first person shooters to consoles and gamepads, turning a PC-exclusive genre into a global mainstream product,” says Eggert.

The large round reticle was as vitally important as the weapon's form. A tiny pinpoint reticle is fine for a computer monitor a couple of feet from your face, but this larger reticle is perfectly suited to a TV screen. The larger size of the reticle also hinted at the presence of subtle aim assist, which helped smooth the transition of shooters from keyboard and mouse to controller.

TAKEAWAY: Make sure your weapon is perfectly suited to its platform. 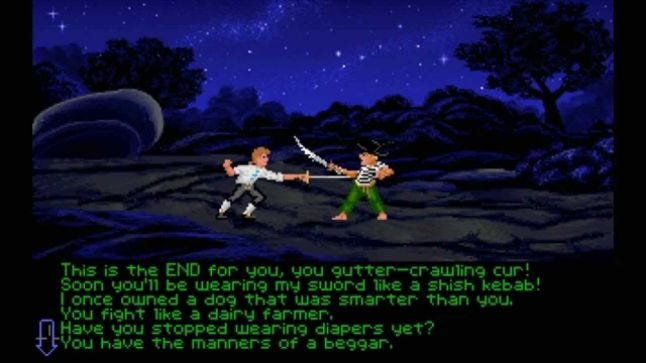 5) Insults in Secret of Monkey Island

"I think there are unexplored real life 'weapons,' so to speak, that we could translate to the world of games to create something interesting or novel," says Anna Kipnis, who's working on Headlander at Double Fine. "One silly example of this, a rapier wit, is demonstrated to great advantage by the Insult Sword Fighting in the Secret of Monkey Island series."

The game's witty take on swordplay lets you deal damages with cutting put-downs and slashing comebacks as well was with your rapier. "You learn new insults as you explore the town, and can then use them to get the upper hand in a fight," says Kipnis. "It was a beloved and memorable feature in that game, fun precisely because it wasn’t so on-the-nose as a fighting mechanic. "

Kipnis says she's been pondering the role of weapons in games a lot lately, and cites a talk Ste Curran gave at the recent Nordic Gaming Conference as influencing her thinking. "It so happens that doing a ray trace out into the world and seeing if something hit is one of the most satisfying, revolutionary discoveries in video games and has long dominated our medium," she says. "But we are in some real danger of painting ourselves into a corner as being the raytrace mechanic medium. It is more or less a solved problem that we can only make vanishingly slight improvements on by studying yet more physical weapons. I think we would better serve our players by drawing inspiration from more surprising, unusual sources than actual weapons."

TAKEWAY: Try to think beyond the constraints of overfamiliar weapon types, you gutter-crawling cur! Endlessly replicating standard mechanics is as repulsive as a monkey in a negligee!