Doom is known for its speed and straightforwardness – move fast, shoot demons. It's a seemingly simple combination that, at the franchise’s best, evokes an ultraviolent cognitive flow.

But Doom’s apparent simplicity belies a core design that is difficult to achieve. For Doom 2016 (which I argued was the best-feeling shooter of last year), reaching design goals and staying true to what makes Doom, Doom, was all about establishing clear development goals and maintaining a sharp focus.

"From a high-level perspective – this is going to sound overly simple for a dev audience – but it was absolutely 100 percent 'fun first,'" says Marty Stratton, game director at Bethesda-owned Doom developer Id Software, where he’s worked since the late 90s.

"I know a lot of developers would say 'yeah, of course, we all do fun first'...I dunno," he said incredulously. "I think that was definitely a big, big thing for us, always. We let the game tell us what it wanted as we played it constantly, and always steered into the fun.

"And that came back to the most fundamental design things: bad-ass demons with tons of personality, great guns, and fast movement – push-forward combat – that created [what we call] 'combat chess.'"

Mentioning the plodding, cerebral turn-based game of chess when explaining the fast-paced demon-slaying combat of Doom sounds like a stretch – and maybe it is – but that concept is one that the development team was able to understand and use as a guide.

"Making that combat chess really, really fun, and making it feel like you’re on this ultimate power fantasy just was really, from a gameplay perspective, the guiding principle,” Stratton said. 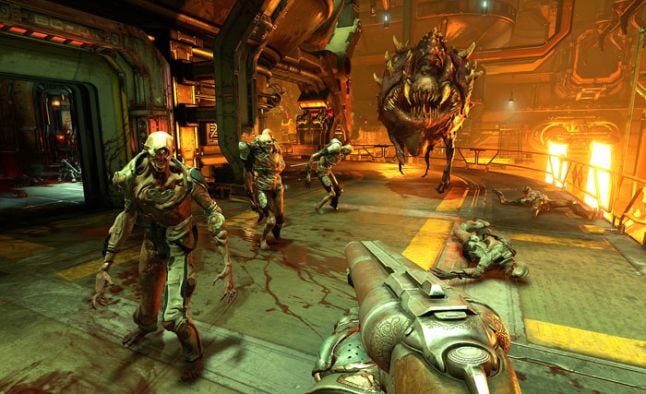 Here’s how Stratton and Id creative director Hugo Martin defined the idea of "combat chess": speed of movement; individuality of the demons; distinctiveness of the weapons; overall power of the player; and the idea of "make me think, make me move." 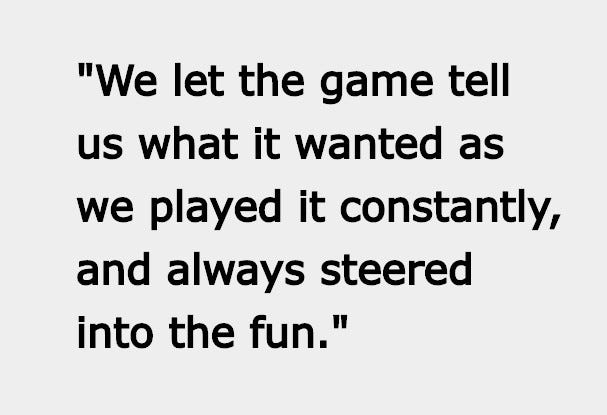 "Players play games because they want to think, whether they’re playing a strategy game or whatever. We play games to think – to solve problems," Stratton said. "In Doom, the problem is combat – I’m surrounded by 10 enemies, and I size them up based on how they look like and what I know they do."

Because of the speed of Doom, all of the information needed to solve these "combat puzzles" had to be quickly digestible and understood by players. Pieces of the puzzle needed to be distinctive and available in order for players to solve them on the fly. "It’s just about introducing those [puzzle pieces and tools] over time,” said Stratton.

Even before the start of the production of this latest Doom, Id knew a thing or two about killing its darlings. Somewhat famously, Id got deep into development of a previous version of the game; a story-heavy interpretation of the franchise announced in 2008 that was later referred to as "Call of Doom" due to its apparent inspiration from Call of Duty and other shooters of that ilk.

But a full-on cancellation of that project and a complete restart put the game on the path of Doom’s 2016 iteration. Taking "combat chess" from concept to a polished product was a process of playtesting and iteration. This involved constant editing and course correction; an exercise in staying focused on design goals and cutting and fixing what didn’t jibe.

For example, Stratton explained how for a period of time during development, the game’s demon AI would run straight at players, aggressively closing the distance. "We’d end up in these situations where you [as a player] would instantly start backing up – you’d go on your heels," he said. "It’s a very natural thing [to do as a player]. It was basically 360-degree combat, with everyone coming at you from all sides." 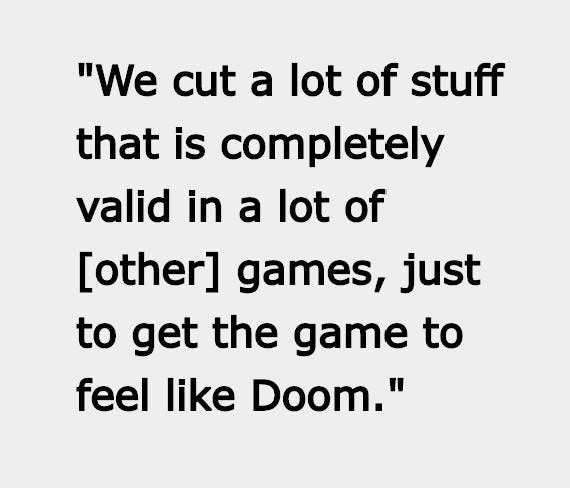 During playtesting, players would find a wall to back up against or a choke-point to take advantage of in order to stay alive, which was a cheesy way to play supposed chess.

"The combat just wasn’t working at all," Stratton said. "It really took some effort to get everybody geared around the idea that demons, except for melee demons, should hold their position, and we can't put too many melee demons in [an arena] at the same time, because then you lose that feeling of combat chess. If all the pieces moved all at the same time towards you, chess becomes very much not fun."

By having demons hold their ground longer than before, the design put the impetus on players to move in on enemy positions. "The player was [now] the one initiating, picking his way through the arena and through the space," said Stratton.

Martin said there wasn't anything inherently "wrong" with how the creatures initially behaved – other games have enemy AI that swarms players. But that tack didn’t follow one of Doom’s core design filters, which is "push-forward combat."

Martin added, "We just edited a lot of stuff, and said we don’t necessarily want the player to have multiple ways to accomplish their goals – there’s only one way to play Doom…We cut a lot of stuff that is completely valid in a lot of [other] games, just to get the game to feel like Doom."

Doom’s combat, Stratton said, is designed to make you feel like you’re up against overwhelming odds – that all of the demons of hell are coming at you at once. But even though there might be many demons in an arena at any one moment, you’re actually only going up against a small amount of them at any given time. 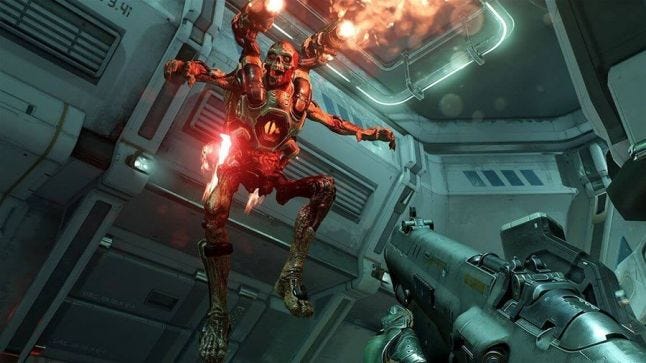 Stratton said, "We did hit a point where we got the AI doing the right thing and the arenas [were] coming together with the right kind of geometry, and it really started to feel like it should – like I’m maintaining my control, but I’m always playing the game in a way we’re intending players to play."

The team behind the new Doom wanted to recapture the essence of the original game, and one of those key elements was speed. Id wanted to move away from the more plodding survival horror pace of Doom 3 and return to a rock and roll-inspired, high energy format.

Stratton said he couldn’t remember exactly how many times the team changed the game’s speed, but he knows it definitely increased from the earliest prototypes to when it went into full-on production. "We knew early on that it needed to be fast, under control, and we had to make a game that worked equally well on PC and consoles," he said.

One of the game’s developers put together a movement map that became Id's test bed for nearly every change made in the game’s development. "It was just a matter of finding a balance and testing," Stratton said.

In the game, players could also set up rune abilities to boost their speed, so more speed was also available if players wanted it. Martin also noted that it’s not just actual player speed that makes Doom feel fast. The feeling of speed is also enhanced by the size of the game’s arenas, and the enemy encounters.

"The right size arena, with just the right amount of space, actually made the player feel even faster,” he said. "Your top-end speed is good but you’re more agile than you are fast. If you’re in the right space, it can just feel perfect. We spent a lot of time during development finding exactly what the right-sized spaces are for Doom to make you feel quick and agile, but still under control."

Doom cuts the cruft from the modern first-person shooter format. There’s relatively little dialog, there are "missing” mechanics like reloading, and the tools provided to players in order to progress require little overt explanation or tutorializing.

Like many things that "just work,” reaching that level of simplicity was not so simple. "It’s funny,” said Martin, "because we still talk about this stuff now [at Id]. It’s kind of gotta be simple – like Apple simple. We really feel like if the audience can’t understand [a complicated idea] really fast, I mean in seconds, then it just doesn’t [belong] in the game." 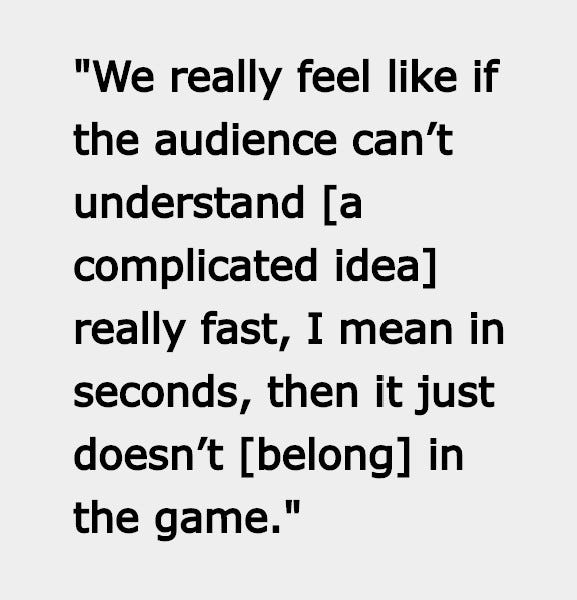 Stratton explained one anecdote in which the team edited for simplicity. He said at one point during development, the team was considering whether or not the player had enough information to know at least where to go. For a while, Doom developers experimented with having a voice in the player’s ear; a helper. They wrote some lines, keeping the dialog "light and cool,” he said, and even implemented it in several levels at one point.

"It works in tons of games," Stratton said. "More games have it than not, where someone says, 'Hey, you gotta go do this!' Fundamentally, that works. It worked [in Doom]…at a mechanical level."

But what works in other games won’t necessarily work in your own game. "For Doom, when you played it, you’re like, 'I don’t wanna hear this fucker," Stratton said. "Get him out of my head, because this is my game. This is me making the choices."

This type of trial and error happened throughout the game’s development. The team made sure to cut the extraneous material that fell outside of the game’s filters, and in the end there was a focused, cohesive end product.

"There are those moments where you implement something and you implement it well, and make it exactly like you want, but when you play it you’re like, 'This just isn’t us. This isn’t our game,'" said Stratton. "Those are all good learnings."