Werewolves Within: How Ubisoft adapted a tabletop classic for VR

"We wanted to try & capture this social experience you get from playing games around the table, especially social deduction games," said Ubisoft Red Storm's David Votypka. The result is worth studying.
Alex Wawro
Blogger
March 15, 2016

Tetris wasn't the only influential game to come out of Russia in the '80s.

The party game most commonly known as either Mafia or Werewolf is also believed to have gotten its start there, and in the decades since it has become a significant influence for many game designers.

That's due in large part to the ways its design effectively balances power between two disparate, opposing sides: the innocents vs. the monsters. In these games, information is a weapon -- if the innocents successfully finger the monster(s) in their midst, they win. If they pick wrong, they lose.

Now, a team of developers at Ubisoft is trying to replicate that sort of intensely social gameplay in virtual reality. The game, launching later this year as Werewolves Within, got its start at Ubisoft Red Storm as Lobo, one VR prototype among many created by a small team led by senior creative director David Votypka after he ceased working on the studio's Rainbow Six game.

"We wanted to try and capture this social experience you get from playing games around the table, especially social deduction games," Votypka told me last month in a meeting at Ubisoft Montreal. "So that's why our prototypes typically involved a traitor of some sort, and having to figure out information about other players. I guess that's where the impetus came from."

What makes Werewolves Within intriguing, at least from a VR game maker's perspective, is how the game is designed to treat common social behaviors as game mechanics -- and how those mechanics are then triggered in-game.

In a demo I played last month, a party of players were assigned (seemingly at random) to play either villagers or werewolves who look like villagers, each with a specific set of abilities tied to their role. One villager, for example, might be able to look at a specific "side" of the table or campfire (every round of the demo we played saw players' VR avatars sitting around in a circle of some sort) and say, with some certainty, that that half of the group are or are not werewolves. 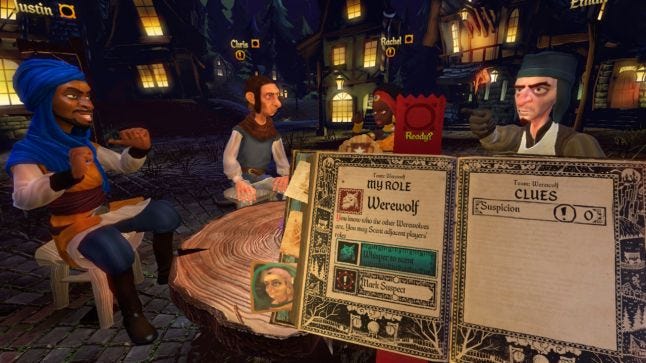 They can then communicate this to the rest of the group (who must vote on who the werewolves are before the round is up), but they don't have a way to prove anything - the entire game is predicated on players' ability to convince (or lie to) everyone else.

In a 'social VR' game, leaning or standing up can be key gameplay mechanics

The game requires that every player be part of a group VoIP chat (we were playing on Oculus Rift headsets with built-in microphones) and you'll spend most of every round talking out loud to the rest of the table. More notably, the Werewolves Within team have designed special modes of communication that are triggered by intuitive player movements: physically standing up (both in real life and in the virtual world) to temporarily mute everyone else's mic so you can "have the floor," for example, or leaning your head left or right to engage in a private VoIP chat with the player next to you (they have to lean in also, of course) -- even as the rest of the table sees your avatars whispering together.

"The whisper mechanic itself came from us thinking about how, in a real social situation around the table, how people interact," said Votypka. "What would they do if they wanted to share private information? They'd whisper to each other. You can do that in VR, and we can prototype it. So we set it up so when the position tracking detects two Rifts leaning in together, we put the players in a private VoIP channel, and it felt like a very natural, logical fit." 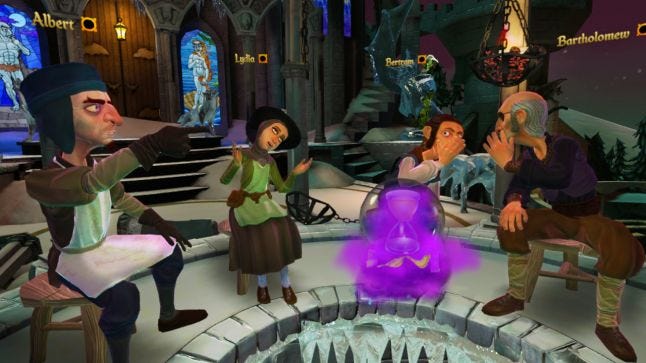 There's a bit more to Werewolves Within than these social mechanics, but they're what I think make this project stand out amid the sea of VR projects swirling around the industry this year. They're clever, intuitive uses of the core VR controls (you really only need a VR headset to play, no gamepads or wands required) and, despite their ubiquity in tabletop game design they're a relative rarity in contemporary video games.

Votypka agrees, for the most part, but he cautions fellow developers against using VR controls just for the sake of using the hardware.

"Your mechanics need to fit into the type of game you're making -- for us, it's a social game -- and they need to intelligently use the VR controls," said Votypka. "As opposed to like, a Kinect game, where like if I'm trying to drive a car by waving my arms around in the air. That's not logical or natural, and it breaks the whole experience. So in VR game design your inputs need to be things you would naturally do, the way you would do them, and they need to have gameplay value."

Moreover, Votypka suggests that a future in which VR hardware is ubiquitous is a future where VR game developers can freely experiment with adapting (and potentially subverting) tabletop game design tricks for a new genre of "social VR" games.

"I think social VR is even more compelling, because you feel like you're in the room with someone," he said. "I would say this is going to be a whole, maybe not genre, but a major type of VR game that's going to be very compelling.