Thimbleweed's Jenn Sandercock on moving beyond nostalgia in adventure games

"Many old games were frustrating because of design mistakes, not the actual core gameplay mechanics. We can make a new adventure game using the old mechanics in a way that doesn’t feel frustrating."
Simon Carless
Blogger
September 28, 2017

The game has the look at feel of a classic Lucasarts adventure, and it also has the pedigree: among its creators are Ron Gilbert and Gary Winnick, who brought us classics like Maniac Mansion and Zak McKracken and the Monkey Island series.

But Terrible Toybox also features indie devs like Jenn Sandercock. "Our team isn’t just Lucasfilm alumni, there’s people like me on the team who are relatively newer to the industry," she says.

I talked to Sandercock about what made Thimbleweed stand out from the crowd in an indie field saturated by nostalgia.

Nostalgia is such a critical—some might say overwhelming—theme in so many contemporary indie games. They’re always harkening back to something in gaming’s history and that seems to be the case here at least in the game’s pixel aesthetic, and its classic adventure game style mechanics. How does Thimbleweed Park go beyond that, however? What’s there for people who are looking forward rather than back?

What makes us different to many games that are “inspired by” or “in homage” to classic games is that our core team is made up of people who actually created those classic games. So they know all the things that they learnt previously and have had time to think about ways to fix any issues they perceived in the way they used to make games. Also, I’m sure having fans come up to them over the years saying things like: “I loved X, but that one puzzle was so frustrating” helps a lot.

"Many old games were frustrating because of design mistakes, not the actual core gameplay mechanics. We can make a new adventure game using the old mechanics in a way that doesn’t feel frustrating."

What I and the others bring to the team is a fresh perspective. I grew up playing adventure games and loved them a lot (it’s why I got into the industry). Based on that experience there were a number of pet peeves that I wanted to “fix”.

For example, in Thimbleweed Park at the edge of the screen the cursor changes to show an arrow if there’s another area you can explore at the side of the screen, whether that’s via side scrolling or going to a new room. And that’s because there was one game where I got stuck because I didn’t even realize there was another room I could explore.

None of those things seem very big when taken by themselves, but when you put it together it modernizes the game and makes it easy for people to jump in and play regardless of whether they are veteran point-and-click adventure gamers or new to the genre. 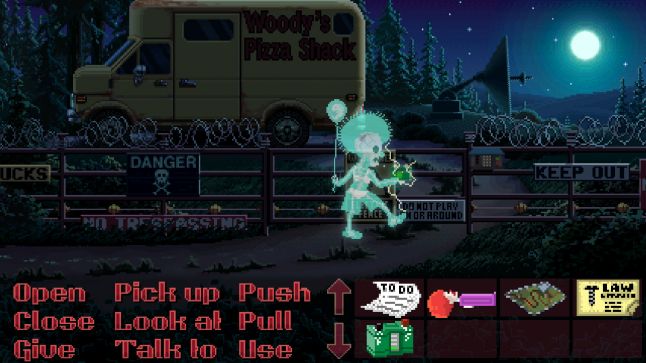 So you believe this widens the potential audience for the game then?

It can be slightly frustrating to me sometimes when Thimbleweed Park is dismissed as simply a throwback game that only hard-core point-and-click adventure gamers will love.

First person shooters have tweaked their gameplay quite a lot over the years, but a lot of the core gameplay is pretty much the same. It feels frustrating that for adventure games people don’t separate out content or implementation issues from the core gameplay mechanics.

Many of the old games were frustrating, but in my opinion that wasn’t because of the actual core gameplay mechanics, it was because of game design mistakes. So if we use our knowledge from over the years, we can make a new adventure game using the old mechanics, but that doesn’t feel frustrating. 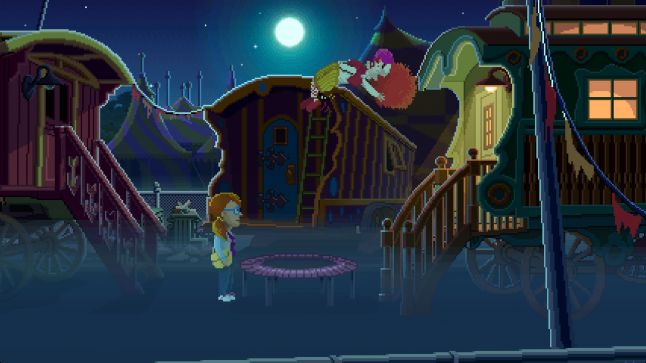 I suppose this is why I feel frustrated with the rather outdated idea that a game critic or reviewer has to say “who is this game for?” Often I’d rather describe what the game does and let people decide for themselves. What are some other ways you and the team have modified the concept of the adventure game?

"Thimbleweed Park was somewhat an experiment to try and work out what it was that made those games charming, since we weren’t sure what component it was. We kept many of the same mechanics, and modernized where we thought it was necessary or improved the game. "

For us, Thimbleweed Park was somewhat an experiment to try and work out what it was that made those games charming since we weren’t sure what component it was.

So we kept many of the same mechanics, modernized where we thought it was necessary or improved the game. Of course, I’m a little biased, but I think we really did manage to capture a bit of the charm.

I feel that we’ve made point-and-click adventure games accessible to people who’ve never played them before as well as people who never stopped playing them.

Developing a game is difficult, and it’s hard to find time to put in all the features we want. For example, I really wanted to put in some sort of hint system, since I don’t like walkthroughs that spoil the game. However, during development we ran out of time to work out how to integrate a hint system into the fiction of the game and not make it too jarring to players.

After release, Meghann O’Neill wrote an incremental hint system that reminded me of the old UHS (Universal Hint System) style hints. We liked it so much that I worked with Meghann to put it into the game as a phone number that you can call within the game, a hint line.

In hindsight, it feels like an obvious way to implement hints, since the game is set in 1987 when adventure games did have hint lines where you could call and talk to a real person to find out what to do next.

But during development, we just couldn’t have taken the time to work on this. So it feels great that now anyone who’s downloaded it can get this update for free. You couldn’t do that for games on physical disks back in the day. 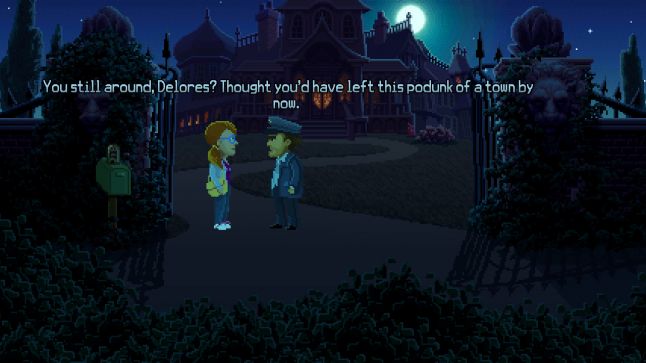 What do you think the role of puzzles and problem solving is in contemporary games? I find them fascinating not only as callbacks to the early says of RPGs and adventure games, but they also serve an interesting mechanical purpose that pushes the game beyond raw combat. What does this add to Thimbleweed? Or, indeed, any game that uses such mechanics?

"When we were designing puzzles, we always came at it from a story perspective first. By integrating the puzzle solving with the narrative, it means that players themselves progress the story."

When we were designing puzzles, we always came at it from a story perspective first. We knew what we wanted to accomplish and then we’d work out how someone in the real world might solve that puzzle and try to see if that makes sense within our game world.

By integrating the puzzle solving with the narrative, it means that players themselves progress the story. It’s kind of like the show, don’t tell method, but is “do, don’t tell” instead. Players feel a lot more ownership when they get to play a real part in the story themselves.

I feel that many contemporary adventure games have moved away from puzzle solving and have concentrated on the narrative/story part of the game. I was a little late to get around to “finishing” it, but I loved playing the Witness.

Games like that and the Professor Layton series feel like their core puzzle solving mechanics are very separated from the underlying narrative that goes through the game. Although I love the puzzles, they’re what I solve to get a cutscene, rather than advancing the narrative by my puzzle solving. Other adventure games these days have very little in the way of traditional puzzles at all, such as Gone Home and Firewatch.

I think that this evolution of adventure games is great. It’s wonderful to see people taking the genre in different directions. However, I believe that rather than us deciding there is only one “good” way to do an adventure game, these different approaches are simply adding to the breadth of types of adventure games that are possible.