Mable & The Wood: Expanding a prototype & wrestling with difficulty

Andrew Stewart of Triplevision Games talked to us about how Mable & The Wood has changed since that initial Ludum Dare prototype.
Game Developer
Staff
March 31, 2016

Mable & The Wood first came into being as a solo entry for Ludum Dare last April. The theme that time around was An Unconventional Weapon, and Mable had my favorite implementation.

Where most people were turning strange things into weapons, Mable had a sword that appeared normal, but was never swung. Instead, the player character changed shape into a fairy, dropping her weapon. Upon her return to regular form the sword would snap to her current location.

The game has come a long way in the past year, and Andrew Stewart of Triplevision Games has talked to us about how the game now called Mable & The Wood has changed since that initial prototype.

Up until a few months ago, Stewart was still the only developer working on Mable. He's now working with Fat Bard Music for sound and Chris Early for art and font design. "Chris has only been on board for just over a week now," says Stewart, "but he'd already helped me out loads with feedback and bits and pieces of art suggestions on the devlog over at [the TIGSource forums]. He ended up making the logo and the pixel fonts that you see in the trailer, so we had a chat and I managed to get him on board to be in charge of all of the text in the game - as well as providing support with the art direction." 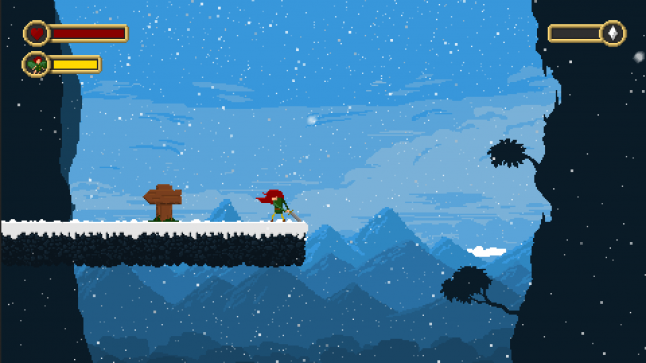 Although the Ludum Dare version of Mable was quite popular, it was also extremely difficult. Fortunately for Stewart, its popularity meant he had plenty of YouTube Let's Play videos to watch in the pursuit of balancing the game.

"There were a lot of things that were a result of it being a jam game, such as issues with collision that I hadn't been able to get fixed and the fact that it randomly spawned enemies, that made it a lot harder than it needed to be," he says. "Rather than being random, the game is now made up of handcrafted levels and it also makes a lot more use of environmental challenges, rather than being pure combat. This allows me to build levels in a way that introduces you to new concepts without having to kill you if you don't get it right the first time (or, if I do kill you, I'll have a spawn point right there)."

Stewart also says that he has to resist the urge to make levels more challenging. "The first batch of levels I sent out to playtesters, I thought they were too easy and people would just get bored. Then I got a video back of a playtester taking 20 minutes to complete the first introduction level (which should take around 2 minutes) and just dying over and over, so I was straight back to the drawing board with that!" 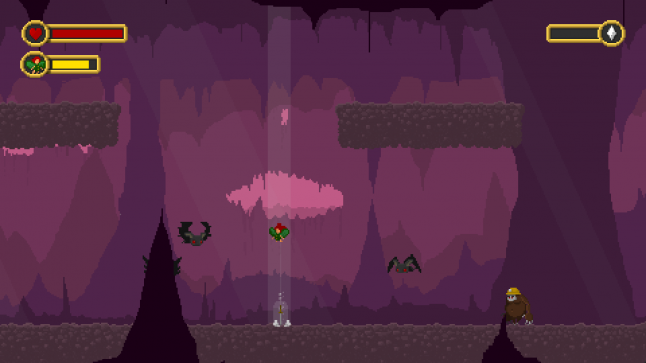 One big change that has been made is that the player can now unlock more shapeshifting options than just the fairy form. They are not required to beat the game, having been designed to offer alternate ways to solve the same problems. Stewart's example compares the fairy and stone forms. "With the fairy, you would recharge the magic required to keep flying by killing enemies," he says. "I have a challenge with a gap that is too wide to clear in one go, with an enemy hovering in the middle. The solution to this is to fly half way, kill the enemy, and then you have enough magic to make the rest of the distance."

"The stone form is a variation on the basic fairy form in that you don't kill the enemies, but you turn then into stone and they then become platforms. Your magic recharges when you stand on those enemies/platforms. So, with the example challenge I mentioned above, you would complete it in pretty much the same way. You'd fly half way and 'kill' that enemy. But, instead of then flying to the other side of the gap, you'd land on the new platform and recharge before continuing." Given that basic example, it doesn't make a difference which form the player is using. When other environmental and enemy factors come into play, however, the specific abilities of each form become advantages or disadvantages. 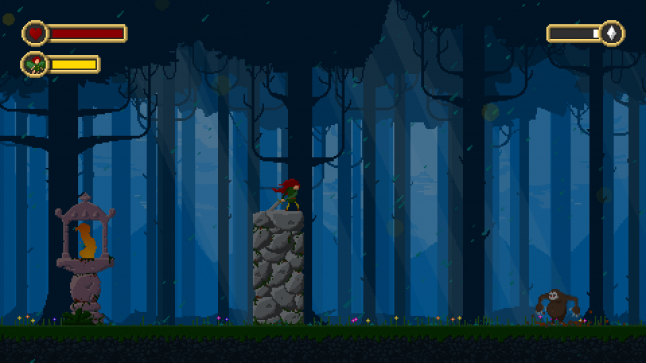 New forms are unlocked by killing optional bosses, each of which is the last of its kind, and choosing to kill them or not will have an effect on the world. "There will be several versions of each level in the game and they're kind of organised like decks of cards," says Stewart. "When you kill a boss, or linger too long in an area, depending on the action that has caused the world to change I shuffle in a particular set of cards into the deck. That gives me the opportunity to add in levels with cool secrets that you can only find if you have a certain form available to you - it also means that I can shuffle in replacement levels for the ones you've completed, so you get a different set if you decide to replay the game (although there'd be an option to turn this feature off)."

There are currently five forms implemented in the game with several more in the works. Although Stewart has ideas for more, he doesn't intend to add them until he's sure they won't negatively impact development of the game.