Camila Gormaz, creator of military RPG Long Gone Days, wanted to explore the life of the soldier, but not through action and gunplay. She focused on the emotional impact that war has on soldiers.
Kris Graft
Publisher
August 30, 2016

"A veteran shared a story about how killing enemy soldiers is sometimes more frightening than the thought of getting killed - realizing your enemy is not an inferior being, but a person who's serving the same purpose as you."

Many games explore the life of a soldier through action and gunplay. Camila Gormaz, creator of modern military RPG Long Gone Days, set out to do more than that, focusing on the emotional toll that war has on soldiers. Through the narrative, characters, and unique systems she has created for the game, players can experience the mental effects of being in combat, all designed based on experiences of real veterans.

Long Gone Days' main character, Rourke, is a sniper that becomes a deserter after finding out the truth about an operation he was a part of. Despite trying to run from the war, though, he soon finds himself drawn back into it, joining other soldiers and civilians in combat.

This story isn't just the result of fiction Gormaz came up with, but of hours and days spent researching the real-life effects of war on soldiers.

This research involved delving into military forums to get an idea of the things soldiers and veterans spoke about when outside of combat. "I started to lurk military forums to study how other conscripts talked to each other, how often they would use acronyms, what kind of things do they fear, and what common occurrences they experience." says Gormaz.

What she found there was, unsurprisingly, much different from what blockbuster movies, games, and fiction would typically convey. She saw a far less glamourous side to war, finding the psychiatric effects of having to kill other human beings.

"A usual topic seemed to be the importance of fear. How fear enhances your senses, and it is in fact a survival skill, and how someone who lacks fear is in fact not a very good soldier, despite what Hollywood wants us to believe." says Gormaz.

She also found a certain fragility to the men and women on the front lines, one borne of the horrific things they would witness and be a part of. "Another piece of information that caught my attention were psychiatric casualties - how a soldier becomes useless for combat after spending a couple of weeks on the front-line."

Beyond even that, she found some chilling information about how easy it is for a war to begin, and the actions soldiers would be part of that they would have to carry for the rest of their lives. "Stories about False Flag operations are the ones that stood out to me the most." says Gormaz.

A False Flag operation is a kind of covert op that is designed to look like it is carried out by another nation or group, hoping to have the victims blame them. It's an unsettling type of operation, one that stuck with Gormaz as she saw the ease in which they could lead countries and people to war.

"I'm the kind of person who can't enjoy horror stories because most of them are impossible scenarios. Personally, I think the real horror stories are the ones that are possible, like just how easy it is to start a war." says Gormaz. "Reading about False Flag operations taught me about the fragility of peace, how you can just make up fake evidence, and leave a country in ruins. It doesn't matter if you get caught afterwards, the damage is already done."

These events and effects stuck with Gormaz, shaping the game she was to create.

One of the most important parts to come out of her research was the Morale system, in which the game's characters steadily grow less effective in combat as their morale drains. The only way to keep this stat up and keep your soldiers in the fight is by knowing them and how to best emotionally support them.

"Because there's such a high emotional impact on soldiers during combat, we wanted to focus on their mental state, and ways to calm these characters down." says Gormaz.

Each of the characters in Long Gone Days is a unique individual, so it's not just down to a matter of saying uplifting things in combat, either. Players will have to get to know the characters outside of combat to know just what to say to them when things seem dire, or else their combat effectiveness will drop. Each person needs to be supported in their own way, so players will need to pay attention when each character talks in order to know how to best keep their spirits up when things get bleak.

This system also comes from the trust that Gormaz saw was important between soldiers. "As I studied more and more about military strategies, it came to my attention the level of trust the soldiers must have for their tactics to work, and I wondered how can you keep your team motivated when everyone's under so much pressure?"

Part of a bond of trust comes from knowing your allies as people, or even friends. The characters in the game could only be an effective unit if they knew each other well, and the Morale system, in requiring players know the characters in order to emotionally support them in and out of combat, builds up that bond of friendship and trust that simulates the bond between fighting men and women.

"While one of the most important aspects of the military is the unity between the soldiers, I wanted to focus on them as individuals." says Gormaz. "Because the first two main characters weren't able to confide in their former squad, the players will have to discover on their own how to gain the trust of their new team members, in order to reach their goal."

Gormaz also sought to show the effects of war on veterans and those new to combat, finding the viewpoints were very different between the two. "Other stories that stuck out to me were personal stories some veterans, and recently enlisted soldiers, shared. It was interesting how different their perspectives were."

Part of the player's squad will consist of civilians who have been drawn into the conflict. While Rourke and a few other characters have been in wars before, these civilians had no experience with it, drawing from the varied levels of experience to show how both sides would view events and be affected by them.

"As they are trying to look into ways to stop these operations from spreading, they get to know civilians who are experts in a wide variety of areas. This doesn't mean those characters are ineffective in combat, but in some cases, their morale is weaker." says Gormaz.

Having civilians in the game would also strengthen the effect and importance of her Morale system, making it an important focus in order to keep her civilians fighters effective in combat. "While the two first main characters are soldiers, the rest of your team members are simple civilians, and the morale system becomes a priority, as these people haven't been trained to work under life-threatening situations." says Gormaz.

A final aspect that Gormaz sought to capture was the soldier's experience as a hostile force in a strange land. Not every character in Long Gone Daysspeaks the same language, and so it is important for the players to have an interpreter character come along with them on many of the game's missions. If they do not, they will be incapable of communicating with the local NPCs.

"I don't want to portray foreigners as people with funny accents. I want the player to feel like THE foreigner - to feel alienated in an environment where they desperately need to be able to communicate, but can't." says Gormaz.

A frightening part of war can be that sense of the unknown - of not being able to speak or even understand the local language. That sensation slowly can build into fear and anxiety as even the simplest tasks and communications become impossible, leaving the soldier feeling isolated from the people all around them. Being in danger in this kind of situation makes things so much worse, something Gormaz felt was important to include.

The interpreter then becomes a key character in the game, and a fragile bridge between isolation and understanding in conflict. Making the player feel out of place in this land will help them feel that same anxiousness, drawing them into the emotional conflict the characters are feeling.

Gormaz sought to learn and convey the mental hardships that soldiers endure in their daily lives and beyond. Through her research, she found the things that stuck with veterans long after wars had passed, and how they would work to cope together in the heat of battle, turning them into mechanics and story elements of Long Gone Days.

Through her systems, she looks to show players how important the emotional bond is between soldiers, and how their emotional state can affect their actions in combat and beyond. 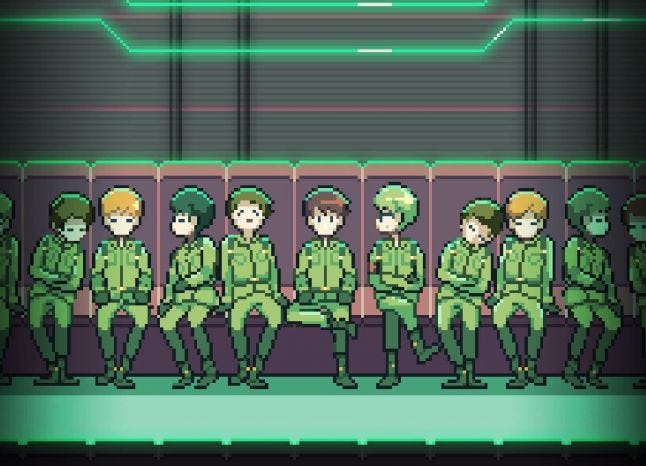 "In Long Gone Days, I didn't want to glorify weapons or show the soldiers as some sort of emotionless killing machines. I wanted to write about a self-centered sniper who often misses his targets, a medic with no vocation, and overall people with flaws and insecurities."

A demo for Long Gone Days is available on Itch.io, GameJolt, and Steam.