A wide-ranging survey of kids' media consumption habits published this week by U.K. agency Ofcom suggests kids are moving away from consoles to play games on mobile devices, and
Alex Wawro
Blogger
November 20, 2015

The United Kingdom's Office of Communications (Ofcom) has published a report this week based on interviews with thousands of children and parents in the UK that suggests children are increasingly playing games on mobile devices, and their parents are concerned about how those games pressure children to make in-game purchases.

Ofcom's findings are worth sifting through because the authority has a meaningful trove of historical data to compare it against, drawn from over a decade of conducting interview-based surveys of children's media habits.

For example, it's interesting to note that in 2005 Oxcom reported 84 percent of children aged 8-11 and 85 percent of kids aged 12-15 regularly played games on a console; today, those numbers have fallen to 71 percent and 68 percent, respectively.

At the same time, mobile device usage among kids in the U.K. has increased significantly, and with it, time spent playing mobile games -- especially tablet games. In just the past year, Ofcom reports a rise in kids' aged 5-15 use of tablets to play games (34 percent do so regularly, up from 30 percent in 2014) and an even bigger drop in their use of dedicated portable game players like the Nintendo 3DS -- 28 percent of 5-15 year-olds play games on them regularly, down from 39 percent last year.

Plus, there's an interesting bit of data in Ofcom's report about the way kids now go online find information on games or anything else they're interested in: search engines are still king, but YouTube is growing fast, as 8 percent of kids with Internet access prefer it as their #1 source of "true and accurate" information.

That's up from just 3 percent last year, and it's worth noting for game developers who increasingly see YouTubers as a meaningful marketing channel for their work. However, it's also worth noting that most children aged 12-15 surveyed by Ofcom (53 percent) don't realize that YouTubers can be paid to endorse products, lending weight to the FTC's strict YouTuber disclosure requirements.

There's a lot more data to mull over in the full report, which is available over on the Ofcom website. 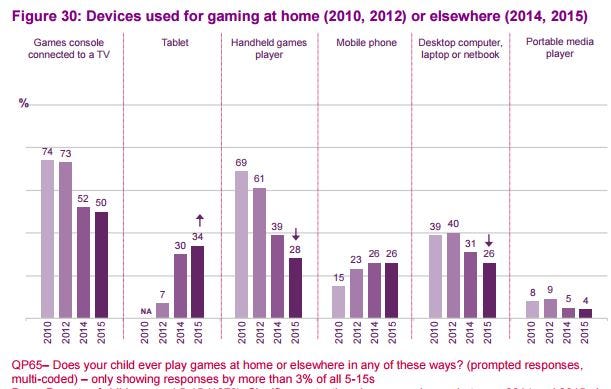