EA is reporting better than forecasted player engagement for its most recent quarter due in no small part to the current global pandemic and its own 'Stay Home, Play Together' initiatives.
Alissa McAloon
Editor-in-Chief
July 30, 2020

EA, like many other major game companies, is reporting better than forecasted player engagement for its most recent quarter due in no small part to the current global pandemic and its own ‘Stay Home, Play Together’ initiatives.

For the quarter ending June 30, Electronic Arts reported net revenue of $1.46 billion, most of which came from live services.

EA does, of course, have quite the robust library of live titles, including Apex Legends, Battlefield V, Star Wars: The Old Republic, The Sims 4, its EA Sports lineup, and many mobile games.

For that pool, Q1 for the 2021 financial year saw the release of 30 new content updates, 2 major expansions, and 50+ mobile updates across Electronic Arts, likely driving the quarter’s potent live services revenue. On the full game releases side of the fence, the quarter’s only new launches were Command & Conquer Remastered and Burnout Paradise Remastered though Q1 did see EA launch a good number of its existing games on Steam.

Still, revenue from full games sales is actually up year-over-year at $359 million compared to Q1 2019’s 262 million, but revenue from its ‘live services and other’ category is significantly higher. Revenue in that live services (and other!) category came in at $1.1 billion for the quarter, up from the $947 million reported the year before.

To look at things a different way, EA's Q1 net bookings (or the net amount of products and services sold digitally or sold-in physically in the period while taking deferred online game revenue into consideration) grew by 78 percent year-over-year, driven by growth across all platforms. The chart below offers a look at how those numbers played out over both previous Q1s and trailing 12 month periods. 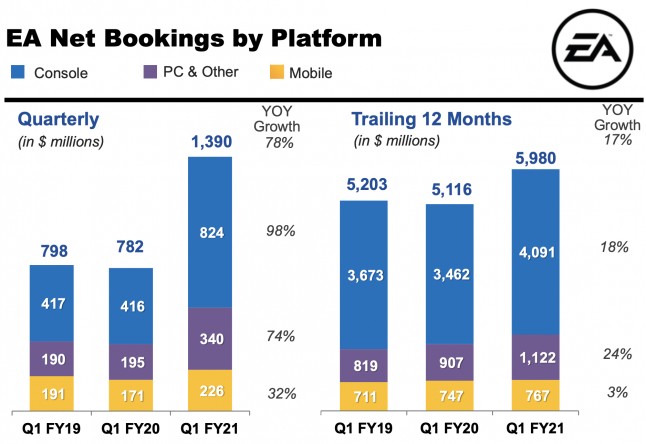 “This was an extraordinary quarter, and we’re deeply proud of everything our teams at Electronic Arts are doing for our players and communities,” reads a statement from EA CEO Andrew Wilson. “We launched new games, deeply engaged players in our live services, and welcomed tens of millions of new players to our network. It was an unprecedented first quarter of growth in our business, and we will continue building on that strength with more innovative experiences, more groundbreaking content, and more ways to connect with friends and play great games throughout the year.”