What are game devs saying about the recently-unveiled Nintendo Switch? What do they know? Do they know things? We found out!
Alex Wawro
Blogger
October 20, 2016

More than a year after formally announcing that yes, it was working on a new home console codenamed "NX", Nintendo published a brief video today hyping up the hardware and dubbing it with a proper name: Nintendo Switch.

As the game industry has long suspected, the Switch is sort of a hybrid console, one that's advertised as being equally capable as a handheld game console and as something you slot into a dock and use to play games on a television.

While the technical details of how the Switch works, or what game devs can expect to achieve on the hardware, are still scarce, the confirmation that it's a hybrid console alone cracks open a cornucopia of intriguing game design questions.

What kind of games work well on a console like the Switch? What new possibilities does an HDTV-connected home console that can be carried outside and used on the go (like a tablet with bolted-on game controllers) affor game designers? How hard is it going to be to make your existing games work well with the Switch's odd-looking "Joy-Con" detachable controllers?

Game Dev Twitter has been buzzing about these questions and more all day, and we've taken the liberty of including a few of the more intriguing bits of chatter below. But we've also checked in briefly with a handful of developers around the industry to find out what the Switch means (or doesn't mean) for them and their work. Here's a few of the more intriguing responses:

"The technological choices they've made with the system are incredibly interesting. What we have here is a high-definition gaming device that provides a consistent experience whatever your preferred gaming environment happens to be.

What really strikes me are the social implications: having two simple controllers as part of the base portable model. Without filling my bag or backpack with a bunch of extra accessories, I can play games with a friend on a standardized screen.

I really like how Nintendo is promoting this feature, because in 2016 we so often interact with each other through a screen, and this technology facilitates playing together in person. Where VR and 4K technologies are pursuing early adopters and enthusiasts, Switch is setting itself up to be appealing to the mainstream." - Samantha Kalman, creator of Sentris and founder of Timbre Interactive.

"The Switch looks like a neat concept. It seems their product design has taken a step up, which is great to see. I've always wanted a more unifying experience between their handheld and console divisions, if only to own fewer devices, so I hope this idea pans out and gets the support it needs to be a success. I'm excited!" - Alex Preston, chief of Heart Machine and director of Hyper Light Drifter. 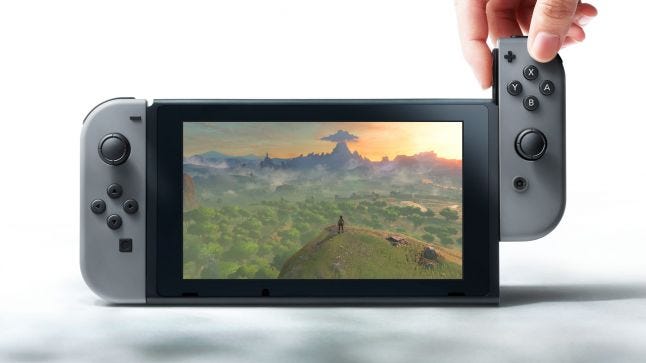 "I've heard rumors about the NX for awhile, and am happy to see that the Switch is indeed a dual home/mobile unit, combining 3ds and WiiU. I thought the detachable controllers were a bit of a gimmick until I saw that they can each work as an independent controller for 2 player games. Now we're talking - a tablet with two controllers, video out, and a GeForce GPU.

Except... no touchscreen. This seems like a step backwards. It can't function as a web browser, and won't work very well for the strategy and puzzle games that I make (and like to play - my favorite 3ds games all used the stylus). If Nintendo continues to release successful mobile games with their IP, they might not port very well to the Switch. I also guessed - just from the number of kids I see playing games on iPads with their intuitive touch interfaces - that Nintendo has been losing the youth market to mobile. Maybe that's why the Switch's first-look video features only adults.

As a developer, I'm excited about the new GPU and the built-in dual controllers. But whether we decide to release our indie strategy/puzzle games on the Switch will probably depend on the usual factors: how popular the Switch is for indie games, and how easy Nintendo is to work with." - Sarah Northway, cofounder of Northway Games and developer on Fantastic Contraption (as well as her own Rebuild games)

"At Yacht Club Games, we're very excited for the Nintendo Switch! Nintendo continues to put fun first by focusing on delivering new, engaging ways to play, which is what we're all about! We can't wait to take advantage of the system's capability to have local and online multiplayer anywhere. It will allow for some truly great game experiences. We can only imagine the pure joy we'll have playing Nintendo's games both on the go and at home." - Yacht Club Games' David D'Angelo, developer on Shovel Knight

"I think it looks great, though I question why the marketing is focused exclusively  on making big screen games portable and doesn't depict 3DS-style games.  One of the missteps of the Vita seemed to be assuming that everyone wanted a portable Uncharted when in fact the system is most treasured for smaller, quirky, or indie style games.  So I hope in the future they show some of those kinds of games since they could possibly be their bread and butter.

I do wish the screen were 3D like 3DS, but that's a minor gripe. Hopefully we can get a devkit soon and start porting Axiom Verge over." - Thomas Happ, developer of Axiom Verge

Got 3 questions about the Nintendo Switch: what's battery life, is the network interface better than the 3DS one, & is it easy to dev for?

I probably won’t for three reasons: 1) There’s only one of me 2) I’m focussed on VR and 3) I’m not a Nintendo registered dev)

my hot take: why is it not the Swiitch