What we’ve learnt one year after releasing our first game on Nintendo Switch.

A look at some of the things we’ve learnt from releasing our first game on Nintendo Switch, one year later. There may be some advice, potentially some insights into our decrepit soul and definitely lots of bad jokes.
Shaun Roopra
Blogger
July 15, 2018 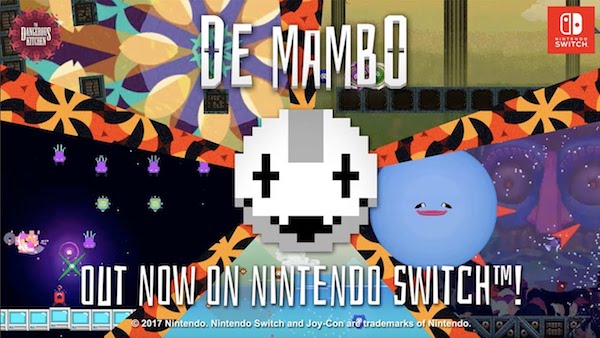 July 13th 2017. That was the day. De Mambo launched on Nintendo Switch in the west—well, June 29th in Japan but for the sake of being topical, lets just disregard that little fact and swiftly move on!

De Mambo was made by The Dangerous Kitchen, (myself and two others originally, but now with two extra humans) and was our first game. We were (are) very inexperienced and had to learn how to do everything ourselves; from learning Unity, to making sprites and even learning how to write a press release! It was incredibly tough, but also really, really fun.

The fact that we somehow managed to release De Mambo in the launch period of a new Nintendo console and considering that we were one of, if not the least experienced indie team that had launched at the time, was a ridiculous feat for us and worthy of going on our epitaphs, but I digress.

So, what have we learnt from releasing De Mambo on Nintendo Switch one year later? That’s simple...

Timing. Timing is everything.

(The following thoughts are probably the most useful for very small teams like us, starting out in the industry with little to no previous industry experience and are aiming for release on Nintendo Switch).

We were incredibly lucky to launch when we did, which was just about the time the ‘indie gold rush’ revved its relentless engine. From anecdotal evidence of speaking to other developers and such, it seems as though we would not have sold as much as we did if we had launched later on—that’s not to say we sold millions of copies (our desolate bank account is testament to that), but we’ve sold well enough to keep us going.

The timing of your launch is important, but to land at this point with the least amount of bruises, you’ll need a lot of laser-focused planning. We here at The Dangerous Kitchen are a bit... well, let’s just say the eleventh hour is when we usually think about beginning a task, so our tardiness has limited us a few times in the past, (not aided by our lack of wo/man-power). You should plan everything as much as possible in advance, like a Mayan Priest tending to their precious calendars, to ensure you don’t miss out on anything that will help your game.

If you have limited funds, you can bypass marketing/PR agencies if you can plan and time everything yourself! It is possible!

Some of the things we advise planning and beginning to execute well before the release of your game, even if you’re a one-human developer team are:

After you launch the game, don’t naively think it’s all over and now the sleep of a thousand sleeps may begin, like a certain naive little games company who shall not be named. This is where the promotion really kicks in, as your game is available on the eShop and good timekeeping is 100% needed.

Doing sales is paramount to you making money after the initial hype is dead.

Look at the barebones Nintendo Switch eShop. You need your game to keep selling, so being swamped by 20-30 new games every week is like having shovels of earth being constantly thrown over your still-alive corpse. Doing a sale equates to temporary-zombie-reanimation that will grant you exposure, so working out when the best time to do so is again, all down to timing. You don’t want to miss doing that sale that could be very successful for you, so again, plan in advance.

You might be dealing with Japan, the US and Europe simultaneously, which those of you with acute understanding of measuring ordered existence will know, are all in different time zones. The amount of stress will pile up, like an overflowing toilet of despair. You’ll have so much to do around the launch of your game, that any future-help you give your present-self will be mouth-wateringly good.

So to reiterate, you’re going to have to manage going to events, making promotional materials, posting on social media and the News Channel, replying to email enquiries for review, dealing with any emergency bug fixes and planning for sale opportunities while trying to keep yourself moderately healthy. Plan. In. Advance.

It may sound boring, but having some semblance of sanity is pretty good in the grand scheme of things. A clear mind is great for managing the fifty-one things you need to sort out, plus any random things that pop up, like that dreaded slice of burnt toast you fear your toaster might hiss out at you.

We’d like to leave you with one last thought, which is that you should try and celebrate your launch, thoroughly and whole-heartedly, to alleviate post-natal depression! You did it! Even if your bones are forever dust, in a way that perfectly mirrors your bank account, you made it. And someone, somewhere is grateful your game exists.

Since De Mambo is currently celebrating its 1 year anniversary, you can grab it on the cheap on the North American Nintendo eShop all day on Friday 13th July 2018.