What does Scorpio mean for developers? Gamasutra staff weighs in

"What we're seeing is a major console maker acknowledging that the PC, more than the PlayStation or the Switch, is its primary competitor right now."
Phill Cameron
Blogger
April 14, 2017

The game industry is buzzing about the recently revealed specs and details about Microsoft's Scorpio console, launching later this year. The hardware is a mid-cycle console refresh of the Xbox One, future-proofing the device as we move into an era of 4K televisions.

But what does the new system mean for game developers?

Gamasutra's own news editor Alex Wawro got a chance to get an early look at the Scorpio, as well as dev kits for the Scorpio. He also got to have a wide-ranging chat with Microsoft's head of Xbox Phil Spencer. You should definitely read both of those articles.

Gamasutra staffers have been discussing the significance of these announcements all week. First in a Twitch chat, and then in an epic email thread. We gathered up the email conversation, and are sharing it below.

Chris Baker (@chrisbaker1337), assignment editor:  I'll kick off the conversation on the newly revealed details about the Scorpio. So what do we think this means for developers? And how will consumers respond?

"If I can also play hotly anticipated Xbox games, like Cuphead, Tacoma, Crackdown 3, Sea of Thieves, and State of Decay 2, on a PC as well...it's hard to justify shelling out for a second hidef console under my TV."

I can give my own firsthand reaction as a consumer. I have been torn over whether to buy an Xbox One or a nice new gaming laptop for the last year or so. I mean, if I can also play the most hotly anticipated Xbox games, like Cuphead, Tacoma, Crackdown 3, Sea of Thieves, and State of Decay 2, on a PC...it's hard to justify shelling out for a second hidef console under my TV.

But I really dig what I've seen of the Scorpio's specs, and I like the idea of a future-proofed game and media device that'll still be good enough for the 4K TV I upgrade to a few years from now. So if the price is right, I may well pick it up.

I'm very keen to know what the Scorpio means for developers. I'm sure we'll see lots of retrofits of previously released games, but how will it change developing for Microsoft's ecosystem?

How does Scorpio change the console business? Phil Spencer's remarks in Alex's interview suggest a desire to create a platform with tons of backwards compatibility, and no hard breaks between generations, like people who play games on PC currently experience. But--honestly, that rich selection of games on PCs has more to do with Steam and GOG and Dosbox than it does with Microsoft. Can Microsoft deliver that on a console? 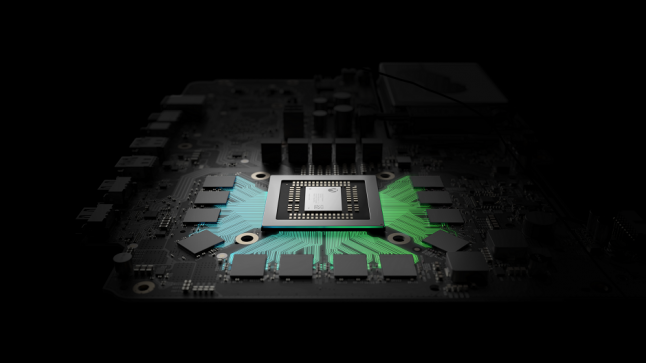 Alex Wawro (@awawro), news editor: Yeah, I think Microsoft's success with Xbox depends more on games than hardware -- Scorpio is shaping up to be a beast, but that doesn't really matter if everyone's playing Mario and Zelda on Switch, or Minecraft and Dota 2 on PC.

"What we're seeing is a major console maker acknowledging that the PC, more than the PlayStation or the Switch, is its primary competitor right now."

Still, the arrival of Scorpio is broadly interesting because it suggests one of the biggest players in the console game space is adapting its platform to be more like Steam. When I spent a day at Microsoft talking to folks about Project Scorpio, they kept coming back to how approachable it would be for third-party game devs, especially PC game devs, because they're already accustomed to designing games that can scale to run well across a variety of hardware.

More than once, the Microsoft folks described Project Scorpio and Xbox One as roughly analogous to games' recommended spec and minimum spec  on Steam. They talked about wanting to make sure Xbox games would be playable across multiple iterations of Xbox hardware. They seemed excited about the prospect of first-party Xbox games (like Gears of War and Forza) coming to PC.

What we're seeing here, then, is a major console maker acknowledging that the PC, more than the PlayStation or the Switch, is its primary competitor right now. That seems like something devs should be aware of.

Chris Baker: Alex, I definitely agree that Scorpio seems to be more about Xbox vs PC rather than, say, Xbox vs Playstation. They're aiming to make Microsoft's console and computer platforms complement each other even better.

Something Spencer said in your interview with him answered one of my burning questions about how fundamentally these mid-cycle console refreshes are shaking up the standard business model. It was:


"Unless the prices of the consoles themselves change to where they're not a subsidized piece of hardware but rather something that's profitable, like other consumer electronic devices, I don't think you're going to see a constant iteration in the console space."

That was what I was wondering--are consoles going to become more like iPhones, with a refresh every 18-24 months and a higher price tag that reflects the actual cost of components and manufacturing? The answer from Microsoft is -- no.

"Microsoft's console hardware will continue to be a loss leader, but ... within the bounds of reason."

So the laws of economic gravity still seem to apply here. Microsoft is willing to sell Scorpio at a loss in order to encourage more people to buy Xbox software and services, but they're only willing to lose a non-ridiculous amount of money on each piece of hardware they sell. Microsoft's console hardware will continue to be a loss leader, but within the bounds of reason.


The most important takeaway I got from our Scorpio dev kit coverage is that Microsoft seems to be keeping developers in the loop, making the Scorpio as friendly and as non-disruptive as possible to game devs’ current processes. I’ve said this before about previous console launches, but the console makers who are best at keeping developers happy have a better chance of success than the ones who don’t.

"I still think that the Scorpio (and the PS4 Pro, for that matter) are tough sells as far as the market is concerned. There’s just not enough incentive today for a huge swath of consumers to upgrade."

It’s been interesting to see so much information about a piece of console hardware come out so far before its launch. I suspect that’s reflective of Microsoft wanting to keep developers informed about this thing, as much as possible (not to mention build a bit of pre-launch hype).

I still think that the Scorpio (and the PS4 Pro, for that matter) are tough sells as far as the market is concerned. There’s just not enough incentive today for a huge swath of consumers to upgrade from their original Xbox Ones and PS4s (maybe we’ll be surprised at E3). That said, I think Microsoft is doing the best that it can possibly do considering how the console business model has painted console makers into a corner.

Their options are limited: they could either go full Nintendo and launch weirdly unique, risky pieces of dedicated hardware and hope it is a hit. Or they could launch a brand new proprietary console that has significantly more power and features, and at the same time reset the high-end console industry once again. Or, they can release an incremental update to their existing hardware, not disrupt the industry with totally new hardware, and pursue the concept of a highly-compatible, persistent platform. For Microsoft, that last option just makes the most sense, and is certainly the friendliest when it comes to game development.

Bryant Francis (@RBryant2012), contributing editor: As Kris said, the best news amidst all this is that Scorpio seems to have been built following an intense feedback session from game developers, and they’ve gone out of their way to solve many of the questions we had at last E3 about making sure devs aren’t adding a whole other console to their development process. I’m still on the fence about whether these claims of “a day or less” to port an Xbox Game to Scorpio are true (we’ll need to hear from developers who aren’t frequent guests of the house that Bill Gates built), but all things considered it just seems that this is “the new Xbox, just without the generation reset.”

However, as I said on our Twitch stream discussion, I still don’t fully get what makes the Scorpio so essential that you either upgrade your current console for it or you purchase a new Xbox to add to your electronic devices collection. I don’t know what it is about Scorpio that entices devs to make unique experiences for the platform. I don’t know what it will do to help older Microsoft franchises really stick the landing and become “must-have” again. I don’t know why I wouldn’t just dig out my current Xbox to play Cuphead, or even more ironically, just play a Windows 10 version of these incoming games that are landing on both Xbox One and PC simultaneously.

Well…I would know why I’d do it. The Windows 10 Store is terrible to use. But that’s another thread.

"If it can’t keep up with PlayStation’s sales, I can see Microsoft wondering if it isn’t time for Xbox to just become the brand name for a set of gaming PCs that sit under your TV."

I really only see two possible futures. The one Xbox wants is for Scorpio to reinvigorate the Xbox marketplace and for people to adopt it as the “default Xbox,” staving off a hard generational reset and eventually reaching a point where 70% of Xbox owners are on Scorpio, so they can make Scorpio the minimum spec instead of the maximum, and it can prepare another soft-advance. (Similar to how most PC game developers deal with graphics card updates.)

The one I see as being…closer to reality, is that Scorpio launches, it does fine, but it doesn’t become the mass-adopted device for console gamers. It’s just a 4th console to own, 5th if you count the Switch in the category of Xbox and PlayStation. But if it can’t keep up with PlayStation’s sales, and still doesn’t have a library of must-have games that attract players, I can see Microsoft looking at this PC-like advancement and wondering if it isn’t time for Xbox to just become the brand name for a set of gaming PCs that sit under your TV.

And I see this as more likely because I don’t buy that 4K or HDR TV sales will move consoles the way that HD consoles moved with new HDTVs, something Spencer discussed. The only thing I’d see staving off the second future and leaning into the first is a really, really good slate of games that are must-have on Scorpio.