Weta Digital, Epic Games, and the future of film, games, and VR

Weta Digital head of R&D Alisdair Coull and Epic Games CTO Kim Libreri talk about the creation of the Smaug VR demo, the convergence of film and games art, and the opportunity for devs in VR.
Christian Nutt
Blogger
March 04, 2015

At GDC this year, Epic Games has teamed up with Weta Digital to present a virtual reality experience based on The Hobbit films -- in which you confront the dragon, Smaug.

"We've reimagined it for VR," says Alisdair Coull, Weta Digital's head of R&D, "You're in the treasure hall as Smaug emerges." The goal was to "try to capture the feel of being in the film -- where you are there."

The demo uses Oculus VR's Crescent Bay headset and a high-end Nvidia GPU, but it uses film assets "reworked ... in some ways," Coull says. "We took our facial animation technology and put it in there."

"We'd been working on taking our high-end assets... and making them real-time. It seemed like a good time to see what it was all about."

Even with the changes, says Coull, "we still manage to capture the feel of Smaug and the look of Smaug." And also "the presence of Smaug," notes Ray Davis, the Unreal Engine 4 general manager at Epic.

Coull describes the VR demo as "a test" and "a technology exploration" for Weta; he describes the relationship with Epic as "a happy coincidence."

Kim Libreri, Epic Games' CTO, describes it from his company's perspective: "it was a good experiment to see how [Unreal Engine] would cope." 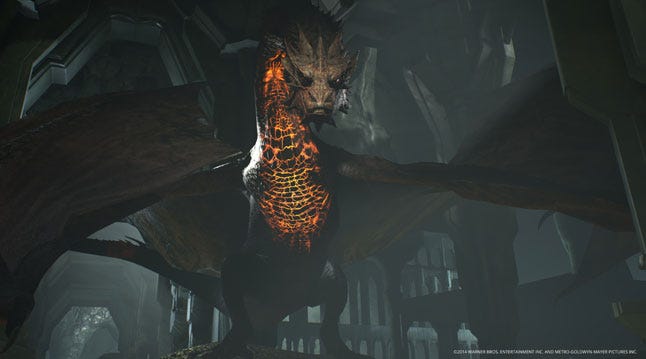 What happens when film and VR converge

For Coull's part, the experience was surprising: "building a VR experience, it was really interesting what worked and what didn't." What worked well was "rarely what you thought was going to work."

"When we built the animation, it was really boring on the screen in 2D," for example, Coull said. "But when you looked at it in VR, it was amazing."

On the other hand, film techniques just didn't work in VR, because the player must have control. That's a big part of why Epic founder Tim Sweeney thinks that non-game industry VR experiences will still be built on the backbone of engines like Unreal, and not with traditional film industry tools.

"It's a new set of experiences," Davis said. "It's been very educational for us to have this collaboration," because it resulted in "a long list of ideas where we can take the technology next."

And how that convergence is going to work

Libreri (who has a Hollywood visual effects background) already has his own ideas. Though the Smaug demo is an experiment on Weta's part -- and won't be turned into a product -- he sees the convergence of the two industries as absolutely in the cards.

"From a feature set and visual capabilities," he says, Unreal Engine is "aligned with the movie industry." In fact, he says, from an asset creation perspective, "the industries will unify in the next five years."

That statement provoked a rejoinder from Coull, however: "I don't know if I'm as optimistic as you." But Libreri wasn't daunted -- he merely clarified: "within five years we should be able to come up with rendering standards" in common; it's "not on this generation of consoles" that the industries will align for real, because processing power isn't good enough, but "within five years, it will be possible to have a philosophy of how you build stuff for transmedia."

"The big challenge is: How do you make a super high-res asset and convert that into something that can run real-time without a massive amount of plugins? Right now, that's a pretty manual process. It will happen that this process will become more automatable in years to come," Libreri said.

And he admitted that the results won't look identical. "But for most people, the fact that it's interactive will fill in the gaps."

"You're going to find a whole new set of entertainment IPs" based around this convergence, he argued.

And now for the plot twist

The success of VR will be driven because "people are hungry for new experiences," Libreri said. "I think VR isn't just a bubble; I think people genuinely want new entertainment experiences."

Of course, today Epic Games founder Tim Sweeney used his GDC speech to talk about the convergence of Hollywood and games. And though the conversation with Libreri and Coull naturally revolved around Hollywood (thanks to Libreri's background and the Smaug demo) the Epic CTO noted that there's so much blue ocean that it's not just the big guys who will define the the emerging VR space.

With Unreal Engine, Davis maintains, "you don't have to be these massive teams with massive funding to build these photo-real environments."

"You can be a little indie developer and come up with a new idea," Libreri said. Those with "fresh minds" who "want to try something different" will rise to the top: "a genuinely compelling idea has a chance of floating ... there's hope to emerge and succeed."