We don't get what the point of Miitomo is, but that's okay

The Gamasutra staff takes on Miitomo. What the hell is it? Is it any good? Does it portend anything for Nintendo's fortunes on mobile, or its overarching strategy for the space? We dive right in.
Christian Nutt
Blogger
April 01, 2016

Miitomo is Nintendo's first app, and it's a big surprise.

It's so surprising -- perplexing, maybe, even -- that, in fact, it drove down Nintendo's stock valuation when it was first announced (investors were hoping for a more recognizable first mobile game.) And then the stock jumped back up when it got a bunch of signups shortly after Japanese launch.

Is it any good?

On its Western release yesterday, the Gamasutra editorial staff installed the app en masse. Here are our thoughts.

Christian Nutt: I'm not sure what I expected from Miitomo, but the first thing I noticed is... It's incredibly polished. But beyond that, I'm just not sure. What are your first impressions?

Chris Baker: The first 15-20 minutes is really strong. I haven't spent this much time fiddling with Miis since the Wii launched. The background music is excellent, character creation is very streamlined unless you want to got granular. Adding friends could be quicker. 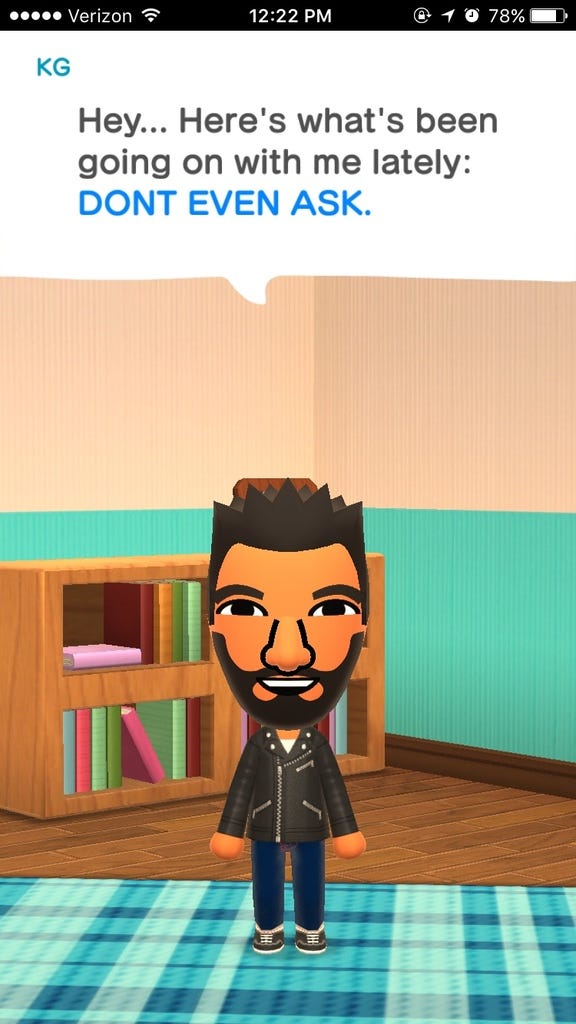 Alex Wawro: I don't think I'm alone in this, but Miitomo seems like an also-ran social network. It feels rewarding to add friends and customize your persona here in the early days of its U.S. debut, but I don't know if there's enough MEAT to keep people checking it regularly for more than a week or two. Maybe the hooks into "My Nintendo" will help give it legs?

Bryant Francis: First impressions: I’m most impressed by the commitment to the text-to-speech feature. I haven’t owned a social Nintendo console in a while, but being confined to the 3DS for so long made me get used to very limited speech interactions on Nintendo platforms. Hearing long, conversational ideas from friends is kind of appealing, and it helps me feel like I can actually talk to people and not just collect them like I do on the 3DS. 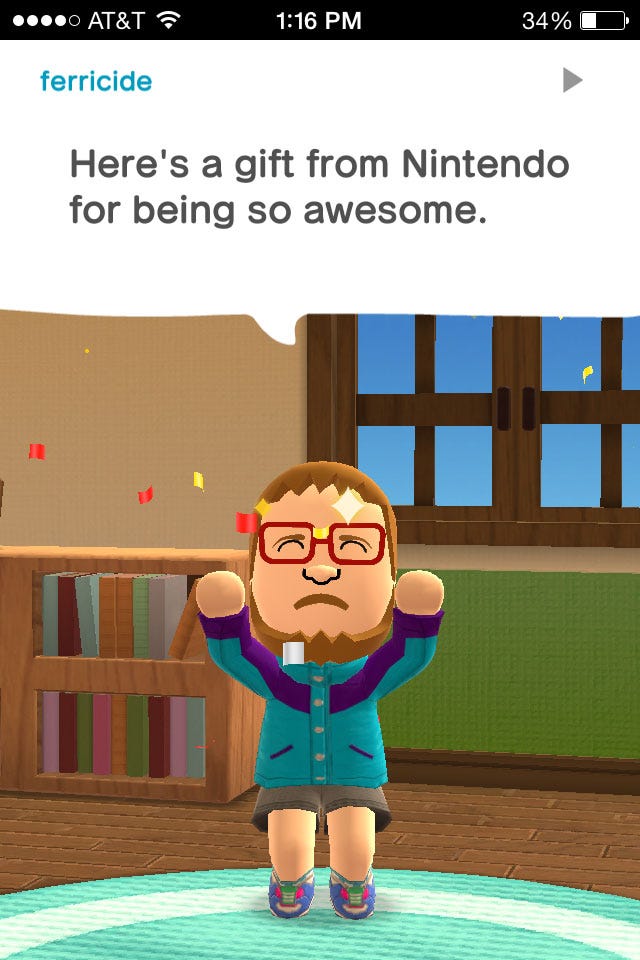 CB: The voice work is impressive, and so's the appropriate body language and reactions that frequently accompany the speech. My friend will write some bizarre response, and Miitomo picks up the context and is appropriately ecstatic or angry or miserable as it delivers that response to me. Very impressive when it gets that just right; hilarious and bizarre when it gets the emotional valence perfectly wrong.

I've already switched off notifications so I can get stuff done.

BF: Actual analysis question: I’m curious what kind of regular interaction Nintendo wants out of people on this -- like what they expect the daily loop to be for an average user. There’s not an amazingly clear set of actions to perform, or goals to achieve. And it’s not a simple utility app like LINE so you’re not benefitting from data messaging. So -- what is that core thing?

CB:  Yeah, it needs some hook like the Everybody Votes Channel on Wii, something that gets people coming back daily. But maybe what we're seeing now is just the tip of the iceberg, and Nintendo will keep iterating and trying out features until something sticks. They may not be making money yet, but they have a huge audience already. They can start playing around and seeing what works and what doesn't in the mobile space.

The really cool thing about Miis was the way they'd crop up in your other games. ("Hey, there's my aunt that I rolled a character for once when she visited at Christmas! And there's Zoidberg!") Is that part of the plan here?

BF: I wonder if it’s enough if they follow up with an app that has significant Miitomo connections in the next few months, and the app becomes a centerpiece in a slate of games that tie back to it. Mobile apps as a whole do reach back into the audience Nintendo so strongly succeeded with on the Wii that we might be seeing a mobile recreation of that strategy here.

And if Nintendo treats this enterprise like most mobile app companies do, I would say there is not THAT much time! That’s the brutal thing about the market they’ve chosen to land on, it’s an uphill climb to stay prominently featured on the App Store on either the charts or the front page, which is critical to maintaining long-term success. Unless they can rewrite the market and production flow to redefine success like they did with the Wii, they’re going to be in the same rat race as every other mobile dev out there.

(Can you tell I am a little pessimistic about mobile these days?)

Hey everyone, sorry I'm late, I was too busy obsessing over Miitomo. Let's all deactivate our Twitter accounts and adopt Miitomo as our exclusive social network.

I hear all of you on your thoughts about the lack of direction of Miitomo, which leaves us asking, "What's the point?" The answer seems to be "to goof off with internet pals." Whereas Facebook and Twitter feel utilitarian, Miitomo uses Nintendo's game design know-how to encourage a relatively high degree of playfulness that results in fun and overall goofiness.

One of the ways the game encourages playfulness is through its question-and-answer based system of interaction. Instead of the blank slate of the Twitter or Facebook update field, you're presented with various questions. Miitomo basically tries to set you up for a funny or interesting reply. That puts a bit of (fun) pressure on you to say something funny or interesting, because you know your friends will see your answers. (When in doubt, just answer with the word "butts," by the way. It always works.)

I'm not sure how Nintendo plans to make any significant amount of money on this... it seems very light on the monetization hooks, which I'm willing to bet Nintendo is gun-shy about. But Miitomo is A) a good way to ensure investors that yes, Nintendo is getting into mobile and B) a way to feel out the mobile space. We'll see how long it all lasts! Having a blast with it so far. 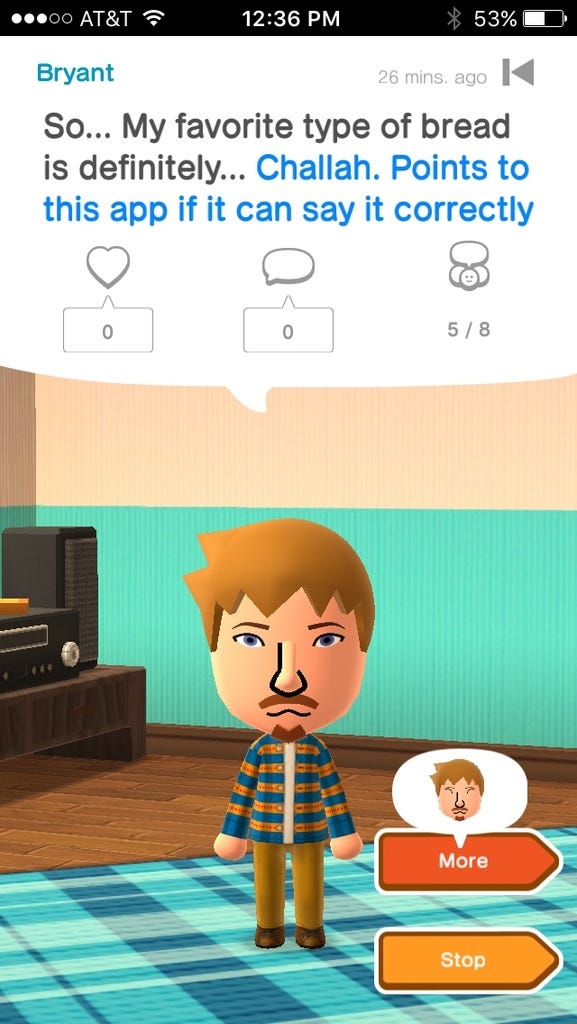 BF: The playfulness thing, I think, is a big hit. I think just what’s interesting about it compared to other mobile experiences it seems to lack its own focus beyond "just keep answering questions."

Weirdly enough it’s similar in structure to dating apps, and how they gamify/reward you with updating your profile with stuff or by engaging in micro-conversation with other users -- but oddly I feel like those can be a little better at this? The "goof" thing is definitely there and fun, but it doesn’t seem to have a structure, or a limit, or an incentive to help me feel out how often I should spend time on this game.

Maybe the "point" is there but the "structure" of the point is missing. Which is an odd thing to demand for an F2P mobile app, since usually that quickly invites unpleasant design to try and get you to spend money! (And now I am a hypocrite!)

AW: I think this approach is working well for a wide audience (everyone I know is talking about Miitomo today) and even if the app proves to be a non-earner or quickly fades from public consciousness, it seems to be expanding Nintendo's ecosystem onto mobile in a meaningful way.

That's good news for Nintendo, I think, but it also seems like good news for developers looking to promote their games on Nintendo platforms -- I noticed some are already taking advantage of the spike in Miitomo interest today to advertise the fact that people receive "My Nintendo" points (which are also tracked in Miitomo) for buying their games on Nintendo's eShops.

Which raises the broader question: what does Miitomo mean for game developers, if anything? Would Nintendo be willing to promote games other than its own via its mobile apps, or even give developers hooks into those apps to, say, run promotional campaigns or offer custom items in the Miitomo store?

BF: I should also point out the game’s gacha mechanics (supposedly something popular and essential in Japanese mobile games) are, if not nonexistant, then essentially buried behind a arcade-ish minigame that’s kind of like... a crane game, I guess? It’s not a central part of the experience and ancillary to everything that’s fun an interesting about the game right now. (Until the leveling becomes competitive somehow, I suppose.)

I would complement Nintendo’s designers for successfully juking away from such a mainstream mobile trend, if that’s the case. I hope they can build on it to help rewrite how companies approach mobile games and mobile apps. 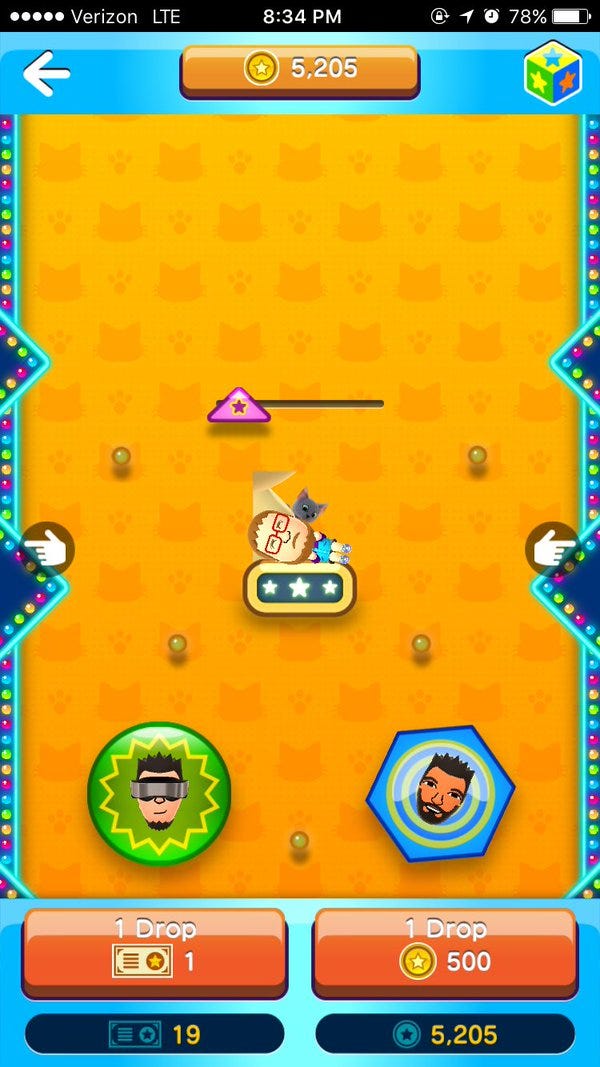 KG: In regards to Alex’s question about Nintendo being willing to promote their other products via Miitomo, absolutely. I failed to mention in our discussion about “What’s the point of this” that Miitomo is already showing that it has reach. At this point, what a free, heavily-downloaded app like Miitomo does for Nintendo is provide the company a platform to help support its main business, the traditional video game hardware and software market. I could see it become a marketing tool for Nintendo’s bread and butter, not just a vehicle to sell cosmetic virtual items.

Miitomo (and other upcoming Nintendo apps) are meant to get the smartphone-using masses familiarized with Nintendo products. Instead of lamenting the fact that smartphones are eating Nintendo’s mainstream lunch these days, they decided to hop on the mainstream wagon that is the smartphone.

Oh hey also, remember that Time interview with Iwata? After playing Miitomo and going back and reading that, it’s all making sense. 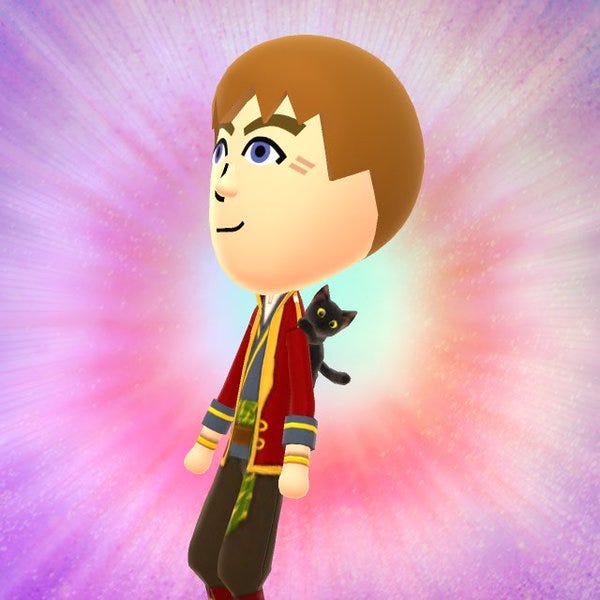 CN: Kris is quite right. Nintendo wants to use mobile games to drive people to its console products, and though this sounds a bit silly for 2016, we don't even know what the NX is, yet, either.

To return to something Bryant said, one of the things that struck me is that after a day of playing the game, I don't even know how to spend money in it. That's more than a little strange for a mobile app.

What surprises me is that there doesn't seem to be a hook to get people to come back besides their own curiosity about their friends -- or maybe their ego. That's also more than a little strange, but I guess that's how Twitter works, too. This... this isn't mobile games... right?

On that note, it's worth noting, Alex, that, yes -- Nintendo actually categorized the app under "social networking" on the App Store. I also noticed, today, that the game gave me a reward for "using" -- not "playing" -- Miitomo.

It's really unclear if this light monetization strategy and lack of a compulsion loop (besides some push notifications which I also already turned off, because they were flooding my phone) can work. As I reported yesterday, two weeks after release in Japan, the app is falling in the download charts and its monetization is dismal (it was ranked #393, according to App Annie.)

I feel it must be a piece of a bigger strategy, but without an idea what Nintendo's next move in mobile, or even with the NX, is, we're not able to see it. Unless Nintendo really does just want to drive My Nintendo signups and Mii creation. It can't be that simple... surely? Whatever the strategy, it'll become clear in time. Unless, more worryingly, it never does.

I'll leave you with this thought: Miifotos rule. 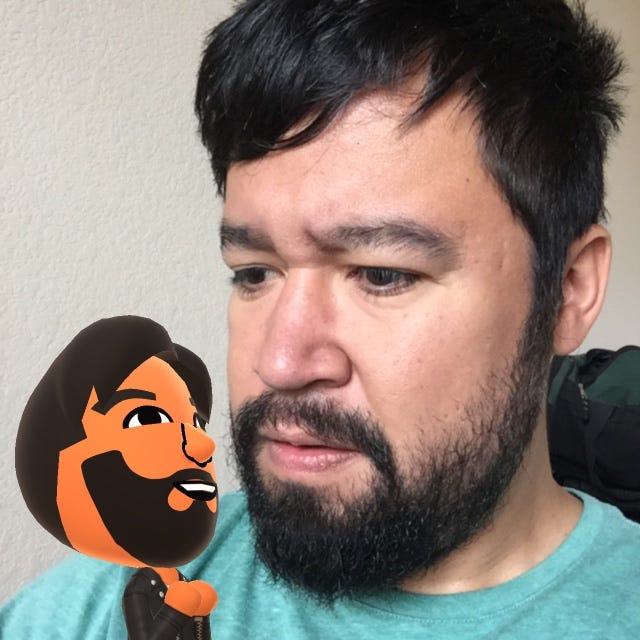 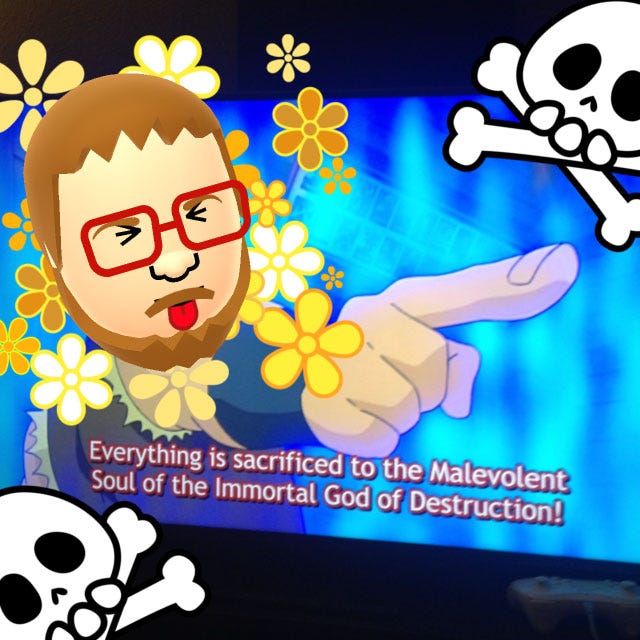 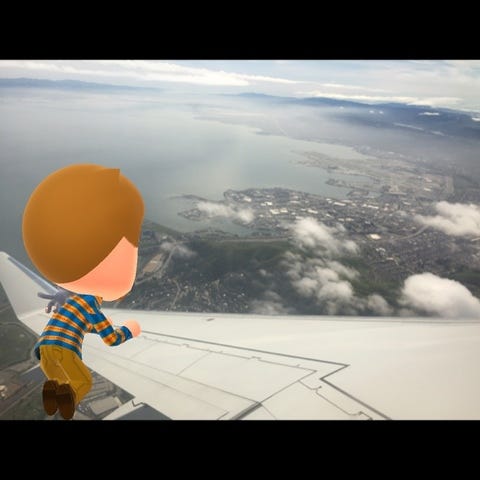