Valve, Oculus, Nvidia and others back Khronos' new VR standard

The Khronos Group has called for the virtual reality market's biggest players to unite to create a cross-vendor, royalty-free, open VR standard. And some big names have already lent their support.
Chris Kerr
News Editor
December 06, 2016

The Khronos Group, a consortium of companies and schools responsible for maintaining open standard APIs like OpenGL and OpenCL, has called for the virtual reality market's biggest players to unite to create a cross-vendor, royalty-free, open VR standard.

In an attempt to rebuild the fragmented virtual reality market, Khronos wants its new standard to include APIs for tracking headsets, controllers, and other objects, and for easily integrating devices into a VR runtime.

The group says it would allow developers to easily port their apps and games to compliant devices, thereby enhancing the end-user experience and driving more choice of content to, ultimately, enable growth.

Although Khronos is calling for companies to participate in what it's calling the "VR Standards Initiative," big players such as Nvidia, AMD, Epic Games, Google, Oculus, and Valve have already agreed to lend their support.

"As virtual reality matures and the essential capabilities become clear in practice, a cooperatively developed open standard API is a natural and important milestone. Oculus is happy to contribute to this effort," said Oculus VR CTO, John Carmack.

It was a sentiment echoed by Valve's Gabe Newell, who hopes Khronos' new API can put a stop to rapid fragmentation.

"The number of VR systems on the market is growing rapidly. Most of these require separate API support from the developer, which is causing huge fragmentation for consumers," explained Newell. "A standard API to enable applications to target a wide variety of VR devices is an important step to counter that trend."

The project is currently in an "exploratory phase" as Khronos looks to collect feedback from developers and headset manufacturers. Work on detailed proposals and designs will begin in the near future.

You can find out more about the initiative, including how to lend your support, by clicking right here. 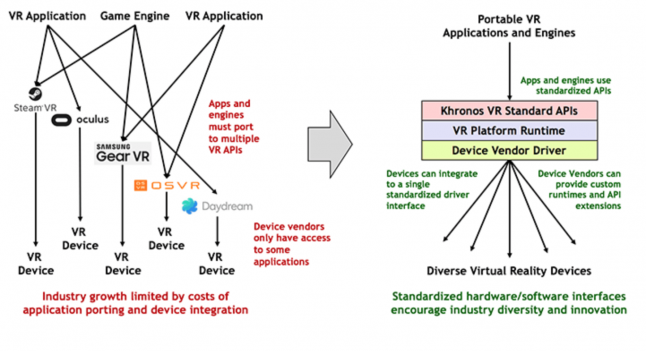