“We don’t believe these constraints will negatively impact real games in any way, and the removal of fake games should improve the store experience for everyone.”
Alissa McAloon
Editor-in-Chief
June 18, 2018

Valve has moved to place a few small restrictions on new games published to the Steam store, something the team homes will cut back on ‘fake games’ without impacting legitimate titles in the process.

A post detailing the tweaks was shared to Steamworks, Valve’s developer-only community, but later shared publicly by a user on Reddit, and developers should be sure to take note of the change in case it affects their own upcoming Steam releases.

Specifically, Valve is limiting how achievements and coupons work for games that “haven’t reached the same confidence metric” that it used for a previous change limiting how Steam trading cards work.

Going forward, games that don’t meet that undefined “confidence metric” will have a limit of 100 achievements, though those achievements won't contribute to a Steam user's global achievement count and will not appear on public profiles. Additionally, titles affected by the new restriction won't contribute to an account’s game library count, won’t be shown in a game collector showcase on Steam profiles, and won’t be eligible for coupons.

“We don’t believe these constraints will negatively impact real games in any way,” explains the post. “And the removal of fake games should improve the store experience for everyone.”

The post on Steamworks notes that the changes are happening specifically to target fake games that exist solely to inflate achievement and game counts on public Steam profiles. While the company says that an “insignificant number of users” were actually grabbing these illegitimate titles and gaming the system, the games in question still mess with the Steam Store’s algorithm and confuse well-meaning users, and thus have to go.

Going forward, games that don’t meet Valve’s “confidence metric” are branded with a “Steam is learning about this game” label which lists all the above restrictions when moused over and informs would-be players that the game’s features will be restricted “until more players have interacted with it.” 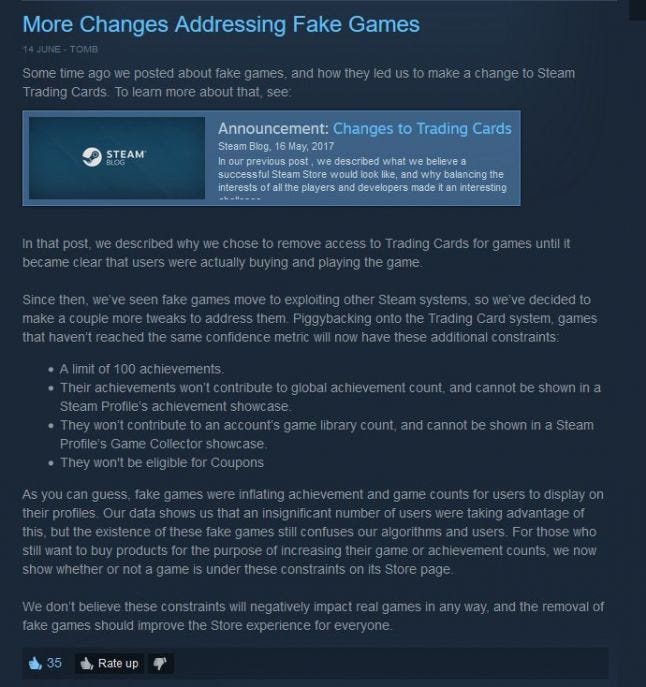