Understanding the meaningless, micro-reactive, and marvellous writing of Disco Elysium

"This thing that we've been calling micro-reactivity is essentially a process for generating narrative ripples on an industrial scale."
Game Developer
Staff
July 21, 2021

There are plenty of reasons to adore ZA/UM's intensely idiosyncratic RPG, Disco Elysium, but one of the most apparent is an utterly compelling dialogue system filled with some of the sharpest examples of game writing in recent memory.

Despite overflowing with an incredulous amount of conversational flair, ZA/UM writer Justin Keenan believes Disco Elysium's much-lauded branching dialogue system only works because, on some level, it's utterly meaningless.

Taking to the virtual stage at GDC 2021 to break down some of ZA/UM's core writing principles, Keenan explained the main thing that differentiates branching dialogue in Disco Elysium to similar systems in other RPGs is that its function is primarily aesthetic or textural, as opposed to instrumental.

Keenan says the studio really pushed to make every slice of dialogue particular, strange, and true-to-character, and claims that while you might believe that's what happens in most RPGs, it isn't the case.

"If you've played even a handful of RPGs you've probably developed a sixth sense for what a character's narrative function is going to be the moment you meet them," he notes. "This is why anytime you meet somebody in a moment of crisis -- like when they're calling out for help or seem engaged in some sort of frantic activity -- you know, right away, that if you ask this person 'what are you up to?' that eventually they're going to give you some kind of task to perform."

"Maybe you can also talk to this person about their life, work, or their innermost political or spiritual opinions. But as a player you know none of this stuff matters as much as the fact that their prized chicken, amulet, or daughter has gone missing, and that if you bring it back you'll get some experience points or reward."

Those NPCs exist in pretty much all RPGs, suggests Keenan, and their narrative function is the same irrespective of the trappings around them. That, naturally, is the point, but with Disco Elysium the team wanted to steer far away from that approach.

Although dialogue in Disco still serves a narrative function -- yes, there are shopkeepers and quest givers -- ZA/UM's primary concern was looking at how they could make each character and interaction as interesting and unique as possible.

"When you talk to Roy the pawnbroker, who's one of the shopkeepers in the game, you don't just talk about the things you might be buying or selling, or ask for general information about the area," Keenan continues. "You can really go deep on his personal history. So, for example, in his youth he spent some time cleaning up a nuclear waste disaster. He also has some very exotic opinions about music and psychedelics. None of those things have any obvious relationship to the main plot of the game, but they do serve to make our pawnbroker Roy feel like a human being with weight and substance in the world."

A few of those narrative nuggets might take on some kind of significance further down the line, but it's not immediately, jarringly apparent. It's a subversive technique that grabs the attention of players, who'll find themselves clocking particular exchanges or moments because of how noticeably unnoteworthy they seem. 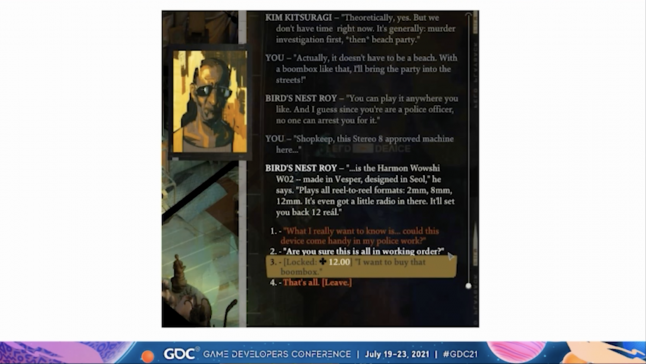 Building on that foundation, ZA/UM also looked to strengthen Disco's dialogue system using a technique called 'micro-reactivity,' which is a term used to describe when a game seems to remember and respond to the most trivial decisions a player makes.

As a technique, micro-reactivity is avoided by some designers because it has a tendency to cause ripples -- which is a polite way of saying it can break your game -- but Keenan believes that, when implemented with care and consideration, it can help elevate game writing to new heights.

"At a certain point in [Disco Elysium] you might get the chance to shave off the horrendous mutton chops your character starts with. If you do, the game will flip a boolean switch to tell us, whenever your beard gets mentioned, to check whether you still have it and present you a different dialogue option accordingly," says Keenan, highlighting one instance of micro-reactivity.

"So, in this example, you've been talking to your partner Kim about his brand of aftershave, and their response will change depending on whether or not you've shaved your beard. Now, one extremely sensible piece of advice you'll sometimes hear from narrative designers is that you want to avoid these things called ripples, which are instances where a player's decisions echo or ripple outward to affect many additional choices, sometimes in ways the game designers can't predict or account for.

"In open-world games these ripples are dangerous because they can create either game-breaking bugs or ludicrous and embarrassing ideological holes. But this thing that we've been calling micro-reactivity is essentially a process for generating narrative ripples on an industrial scale." 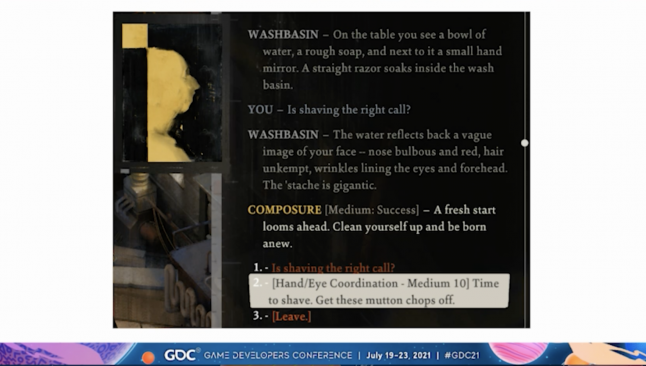 Keenan says there are "probably thousands" of these micro-reactive moments woven into Disco Elysium. Understandably, some were tricky to implement -- such as when Keenan himself wanted to give players the chance to choose one of four unique call signs, thereby created the need for 428 new dialogue cards (all of which had to be localized, voice acted, and so on) -- but he believes if writers commit to the cause, accept the pitfalls, and choose the right moments to go all-in, the results speak for themselves.

"When micro-reactivity works, it's probably the closest an RPG can come to replicating the tabletop experience of having a very good dungeon master sitting across from you listening to you and responding to your most idiosyncratic choices as a player," says Keenan. "That's why, of course, the players who play [Disco Elysium] really tend to like these moments."