"Plaintiffs are informed and believe, and on that basis allege, that the Cheating Software has been downloaded and used by Destiny 2 and Rainbow Six Siege players thousands of times."
Game Developer
Staff
August 02, 2021

Bungie and Ubisoft have filed a lawsuit against cheat software developer, Ring-1. The suit specifically targets four individuals alleged to be integral to the running of Ring-1, including Andrew Thorpe, Jonathan Aguedo, Wesam Mohammed, and Ahmad Mohammed, along with John Does 1-50.

As reported by TorrentFreak, Ring-1 creates and distributes cheat software and hacks that can be used in titles like Destiny 2 and Rainbow Six Siege. The group utilizes a subscription model that allows users to pay €30 a week or €60 a month to access Destiny 2 cheats, for example.

That software, according to Bungie and Ubisoft, enables "members of the public to gain unfair competitive advantages" in their titles, impairing the experience for other players while also harming their reputation and overall business.

The two companies have filed the lawsuit "to put an immediate stop to the unlawful, for-profit sale, and distribution" of those cheats, which are advertised on the Ring-1 website (shown below) as being "undetectable" and "highly configurable." Notably, Ring-1 also explicitly uses the word "cheat" to describe its software.

"The Ring-1 Website boasts that the Cheating Software includes numerous features that will help avoid detection," notes the lawsuit. "In fact, remaining undetected is so important to the success of the Cheating Software that Defendants maintain a live 'status' page that advises users as to whether any particular cheat is 'safe to use'  or has been 'detected' by the game publisher."

"Plaintiffs [Ubisoft and Bungie] are informed and believe, and on that basis allege, that the Cheating Software has been downloaded and used by Destiny 2 and Rainbow Six Siege players thousands of times, including by players residing in the United States and in California. Plaintiffs also are informed and believe that Defendants have made tens or hundreds of thousands of dollars from their distribution and sale of the Cheating Software."

Ubisoft and Bungie are requesting the Ring-1 website be shut down, and want those involved to turn over "all copies of materials that infringe or violate" any of their rights along with accounting documents. They're also seeking actual damages or maximum statutory damages of $150,000 per copyrighted work infringed, and have also demanded "compensatory damages for trademark infringement." You can read the full lawsuit by clicking right here. 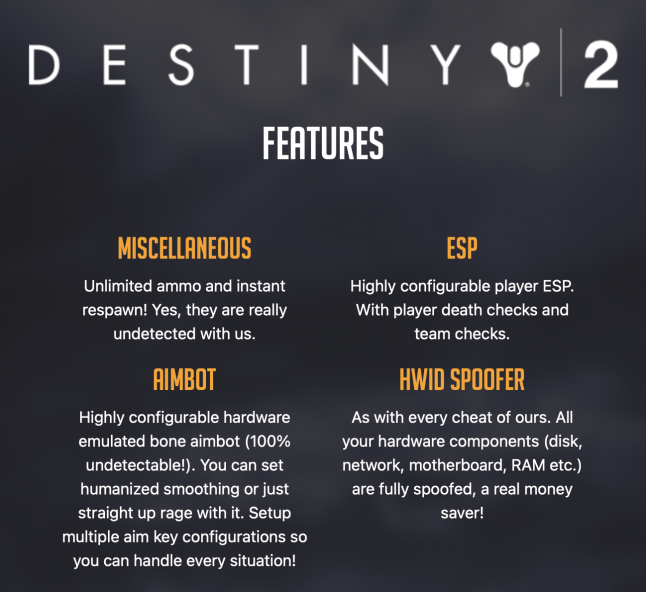