U.S. iPhone users spent an average of $58 on in-app purchases and premium apps in 2017, with the growing number of free-to-play mobile games pulling in the bulk of that cash.
Chris Kerr
News Editor
April 17, 2018

U.S. iPhone users spent an average of $58 on in-app purchases and premium apps in 2017, with the growing number of free-to-play mobile games pulling in the bulk of that cash.

According to analytics outfit Sensor Tower, the average amount spend per active iPhone totaled $47 in 2016, meaning consumers were shelling out an extra $10 on average last year -- an increase of 23 percent.

What's more, those numbers don't include purchases made through shopping apps like Amazon or payments to ride sharing apps like Uber. Although they do reflect revenue earned by popular apps including Netflix and Tinder.

As hinted earlier, mobile games represented the single largest category of iPhone spending on the U.S. App Store, accounting for over half of all money spent.

Breaking that down per device, that means games contributed around $36 of that average $58 spend, which is an increase of around 13 percent year-over-year.

Check out the graph below for a visual breakdown, or head on over to the Sensor Tower blog for even more facts and figures. 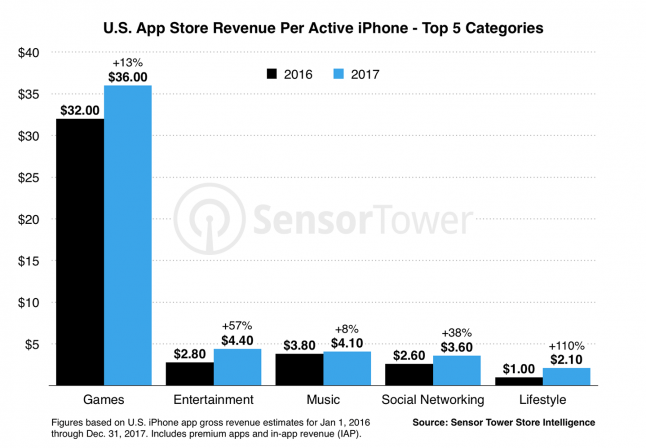