Has there really been a slowdown in digital distribution for the major game consoles? In this in-depth analysis covering WiiWare, PSN, and Xbox Live Arcade, Gamasutra crunches the numbers to discover some surprising trends - graphs galore within.
Matt Matthews
Blogger
June 17, 2008

We've watched this year as avid American PlayStation 3 owners suffered through some truly disappointing weekly updates to the PlayStation Store. Among these fans the conventional wisdom holds that last year's PS Store updates had been more consistent, with more game releases.

In short, there has been a slowdown in the number of games digitally distributed games published on each system's service, and therefore a slowdown for the medium as a whole. Below we'll break out the figures on each console to show how things have changed in the past 18 months and point out the indicators of what things may be like for the next 12.

The PlayStation Store is updated weekly with new media: games, downloadable content (DLC) for games, theatrical and Blu-ray trailers, as well as themes and wallpapers. While there have been some compelling offerings for Rock Band and Guitar Hero III, the marquee items are often the downloadable games specifically for the PlayStation 3.

These range from smaller titles like Super Stardust HD to full-scale retail games like Warhawk. Starting in May 2007, the store began offering downloads of some original PlayStation (PS1) games (like Castlevania: Symphony of the Night) and then in November 2007 began offering full PlayStation Portable (PSP) games (like Hot Shots Golf: Open Tee). The PS1 games are fully playable on a PlayStation 3; however, the PSP games can only be played on a real PSP.

With this context, here is a graph of the monthly game releases on the PlayStation Store since November 2006.

Other than identifying the importance of May 2007 in the history of the store and by contrast the utter weakness of the store in May 2008, the data in this graph is too noisy to be of much use. A graph of game releases by half-year is more instructive.

If we compare just games that can be played on the PS3 itself -- those coded for the PS3 and those for which the PS3 does PS1 emulation -- then there is hardly any contest: PS3 owners got 19 games in 2H07 and only 12 games in 1H08.

The drop in PS3-specific games is telling. At the Game Developers Conference in March 2008, Chris Eden, senior developer relations account manager at SCEA, said that games are added to the PlayStation Store as soon as they are approved. If all the games being finished and approved are also being published, then one suspects that few developers are building PS3 software for distribution through the PS Store.

Given the feeble software schedule for the PSP in the coming months, the rise of downloadable PSP games on the PS Store is intriguing. Perhaps Sony is exploring the economics of launching PSP games through both its online service and brick-and-mortar stores.

With prices ranging from $5 for the rhythm games Beats to $22 for LocoRoco, Sony is no doubt collecting data on how well these games sell -- data that could determine the best way to launch brand-new, full-scale PSP games as online downloads.

In the first half of 2006 Microsoft assured eager Xbox 360 owners that, despite appearances, more Xbox Live Arcade games were indeed coming. The dearth of games during that period is evident in the monthly release chart below.

The service began delivering several titles regularly in Autumn 2006, and accelerated in early 2007. Microsoft broadened its software offerings with the introduction of Xbox Originals -- a line of games for the original Xbox (e.g. Halo) -- in late 2007.

Last month Microsoft announced that it would be culling underperforming titles from the service according to an analysis of demo-to-full-game conversion, Metacritic review ratings, and other criteria. The slowdown in XBLA titles (as opposed to Xbox Originals) could be evidence that Microsoft is exercising more control over which titles may appear on its service.

Through the first year of the Wii's lifetime, Nintendo updated its online service with virtual console games, emulated versions of software for older systems.

Nintendo's consistency in terms of frequency in releasing titles is manifest in the following graph, showing the number and types of releases since November 2006.

Each platform is color-coded, with the new color introduced in May 2008 corresponding to the launch of WiiWare, the sister service to Virtual Console.

December 2007 marks the last month that Nintendo offered ten or more games for the virtual console in any given month. Starting with January 2008, Nintendo has offered 9 or fewer games each month. To my knowledge, Nintendo has made no announcement of a change in its virtual console policy, but the chart above reveals that something is different.

With well over 200 games on the service already, perhaps Nintendo and its partners have already released the majority of older properties they intend to offer. Perhaps Nintendo is withholding software releases, either to extend its schedule or pad the schedule during the second half of the year.

Regardless, the new WiiWare service shows potential to revitalize Nintendo's online catalog. Nintendo says that developers, smaller ones in particular, can deliver new software directly to Wii owners through this online distribution system. With ten releases just in its first month, and a reported 100 more games on the way, Nintendo may have moderated its virtual console releases this year just to make room for new software on the WiiWare service.

A bi-annual view of digitally distributed software releases on the Wii shows that even WiiWare cannot make up for the slowdown in the service this year.

The first and second halves of 2007 each saw around 80 games released through the Wii virtual console. Wii owners will have access to at most 60 new games in the first half of 2008, even with the addition of the WiiWare titles. Just as we have seen for the PlayStation 3 and the Xbox 360, there appears to be a slowing of new software releases during the first half of 2008.

Persistence is a key feature of digital distribution. Once a game is made available for purchase and download, it need not ever go out of stock again. Consider also that all of the consoles -- the Sony PlayStation 3, the Microsoft Xbox 360, and the Nintendo Wii -- have had fewer new digitally distributed games during the first half of 2008 than the last half of 2007.

Are these service providers intending to stack the second half of the year with new software, in time for the holiday season? The possibility is there, although several reasons for the slowdown in each service have been discussed above.

If anything, I would have thought these services would strive against the currently holiday-driven cycle. Since digitally distributed games do not need to fight for limited shelf space in retail locations, they offer an ideal means to smooth out a drop in revenue throughout the spring and summer.

I will look at the release schedules for these consoles again in early 2009 and we shall see then how each service may have changed during the holiday period.

Last November I examined the distribution of ESRB ratings on various consoles. There are now enough games being distributed via console storefronts to ask what types of games each service is offering, based on ESRB ratings.

The graph above shows that a majority of PSN games are rated E (for everyone), with the T rating (for Teen) the second largest category. Only 1 in every 20 PSN games is rated M.

The Xbox 360 has a different but similar profile of ESRB ratings on its download service:

While there are proportionally fewer E-rated games, the E10+ rating (Everyone 10 years and older) accounts for more games than does the T-rating. Interestingly, most of the M-rated games are Xbox Originals, not games designed specifically for the Xbox 360.

Finally, it should come as no surprise that Nintendo's Wii does not have a single M-rated game on its download service:

In fact, 84% of the Wii's digitally distributed games are rated E. Most of the T-rated games are Virtual Console NeoGeo releases.

If we consider all three consoles as a larger whole, the world of digitally distributed games looks like this, through the lens of ESRB ratings:

For comparison, here is a graphic of all ratings assigned by the ESRB for all games in 2007. (Source: ESRB.) 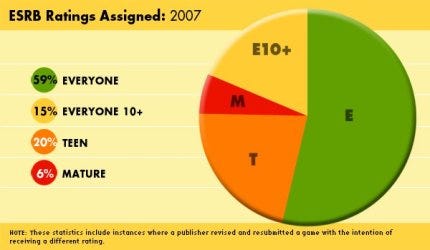 It appears that E-rated games dominate the digitally distributed store shelves more than in the larger market. Moreover, T- and M-rated games are half as common in these online marketplaces as they are across the industry as a whole. (Note: The comparison of the data of released games with that of rated games is not entirely apples-to-apples, but is still reasonable.)

Distribution Across the Consoles

Let us put aside inter-console software categories (like PSP vs. PS3) and examine the release schedules for all the consoles against each other and together. The next graph shows how many titles have been released for each console's online service, bi-annually:

The Virtual Console has been a real boon to the Nintendo Wii, giving it a strong catalog of software, as shown above.

However, it is worth noting that the Nintendo Wii did not receive any original, Wii-specific software until the launch of WiiWare in 1H08. By comparison, the Xbox 360 and PlayStation 3 both launched with original software on their services, and only later offered titles for older systems.

The graph below shows the same data slightly differently. It reveals the trend noted earlier: overall software releases are down in the first half of 2008 compared to the second half of 2007.

(Remember that half of the games offered on the PS Store in 1H08 require a PSP and cannot be played on the PS3 itself.)

In twelve months we will take another survey of the software releases on these service. By that time we will have enough data to see how the service providers are handling the holiday season, whether Sony has turned around the trend in PlayStation 3 games on its service, how far Microsoft chooses to go with its Xbox Originals line of software, and whether WiiWare will take over Nintendo's digitally distributed software completely.

As interesting as the past year has been, the next one promises even more.